The news media had a field day on Friday morning – as if they were trying to force the Fed to change course with their headlines:

“Inflation Data Weakens the Fed’s Case for Another Hike” – Bloomberg.

The data Friday morning depicts elegantly an economy of the same type we’ve seen for years: wobbly growth. The data was better than late last year when the Fed started hiking rates in earnest and when some Fed governors started talking about unwinding QE.

OK, that’s from May to June, seasonally adjusted. Retail sales are very seasonal, requiring massive adjustments to shoehorn the month-to-month jags into a smooth line. Even a small quirk in the adjustments can throw the percentage off bigly. In the bigger picture…

This chart shows the year-over-year not-seasonally-adjusted percent changes in total retail sales, including food services; June’s 3.2% increase is in the middle of the range of the past few years: 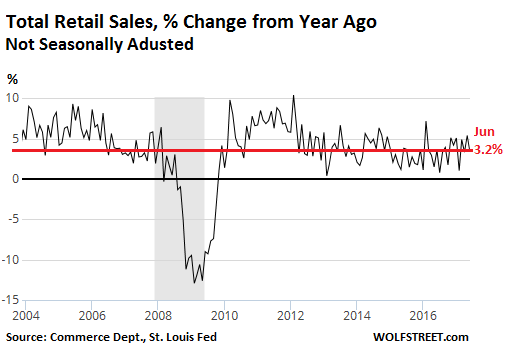 This retail sales increase shows that consumers are giving their darndest to keep this economy above water, despite all the problems they face. They’re hypothecating their future to do it, but so be it, they’re trying. And the Fed sees this too.

Inflation is bad for some and good for others. It’s bad for workers whose wages lose purchasing power, and for bondholders, savers, and other creditors whose principal loses purchasing power. It’s terrible for people with credit-card debt, whose interest rates rise with inflation.

But it’s good for debtors that are borrowing at a fixed rate, such as bond issuers (governments and corporations) or homeowners with big mortgages. And it’s great for publicly traded companies that can claim revenue increases by just raising prices, without selling an extra thing.

The Fed couldn’t care less about workers. But its constituents are on both sides of the line: creditors (banks, bondholders) on one side, and the debtors (corporations, governments) on the other. So it wants some inflation to favor debtors, but not enough to wipe out creditors. Hence a compromise of 2%, based on PCE and core PCE, which are usually lower than the Consumer Price Index. More inflation would punish a big part of the Fed’s constituents – and that’s why the Fed can get antsy.

Inflation, despite the headlines, is alive and well, though not quite at 2% largely due to “transitory” reasons – some of which Yellen has already pointed out.

Year-over-year, CPI rose 1.6%. In the chart below, note the spike to 2.8% in February and the retreat since then. Also note the “Deflation Monster,” one of those rare occasions in the US when the purchasing power of wages rose just a tiny bit. It was caused by the energy bust. It too was “transitory.” Yet, economists and the media threatened that it would be the end of the world: 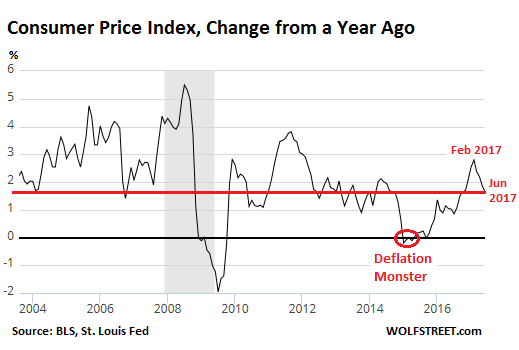 This is inflation in goods and services. But much of the economy is in services. And the consumer price index for services is not so benign.

There has been no instance of deflation in services going back to 1957. In February, the CPI for services had been a hot 3.2%, the highest since November 2008. In June, it rose 2.6% year-over-year, in the upper part of the range over the past eight years: 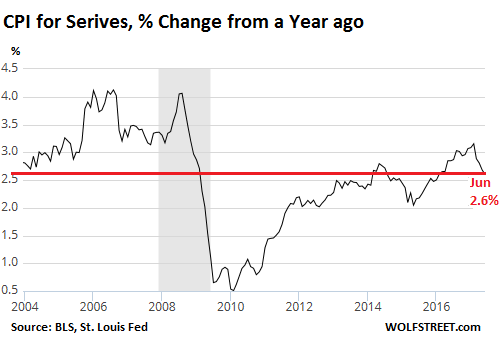 But there were some “transitory” factors. Two of them are related to the auto industry, whose travails I’ve vivisected for a while.

The auto industry is highly cyclical. After seven boom years, the cycle has turned and the slope is heading down. Used vehicle values have dropped due to large supply coming from rental car companies and lease turn-ins. This supply is a godsend for consumers, who’re buying these vehicles like hotcakes, at the expense of new vehicles. And dealers, who’re getting clobbered by declining new vehicle sales, are making money selling used vehicles. 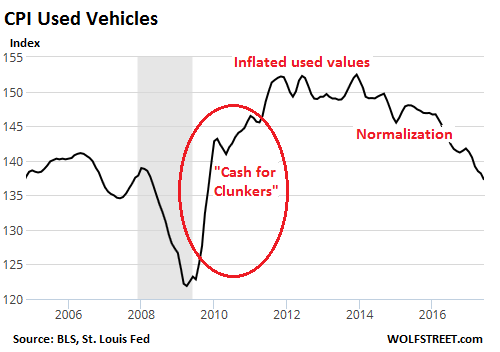 The “cash for clunkers” program destroyed part of a generation of affordable cars. Buyers had to move up the scale. The buying pressure inflated prices through the entire range from 2009 onward. Prices began to deflate in 2014. More recently, the normalization process got a boost from a surge of rental cars and lease-turn-ins.

The chart below shows the year-over-year percentage changes in the CPI for used vehicles, which fell 4.3% in June. Note the declines from prices that had been artificially inflated by “cash for clunkers.” 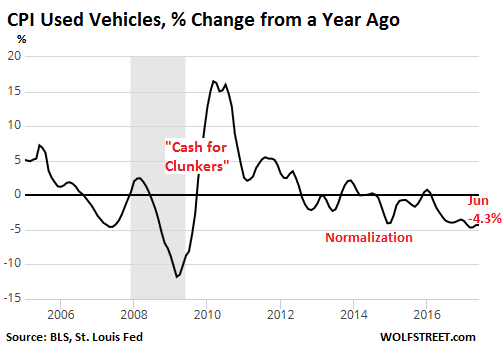 Used vehicle prices aren’t going to zero. Lower prices stimulate demand. The supply will work itself out of the system, at the expense of new vehicle sales. Prices might briefly overshoot to the downside, but will then stabilize or even bounce, thus removing their downward impact from CPI. So this is truly “transitory.”

With new vehicle sales on the decline, automakers are hurling record incentives at the market to move the iron. Including those incentives, new vehicle prices have flat-lined in June: 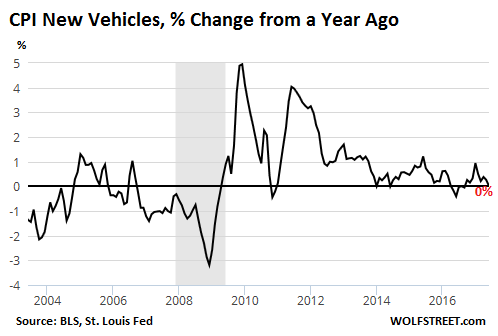 And here’s a special doozie – another godsend for consumers: A price war among wireless carriers has broken out last year. In June, the price index for telephone services fell 9.0% year-over-year. The wireless component plunged 13%. This is part of the reason why the services CPI (third chart above) edged off its spike in recent months. But that consumer bonanza is not going to last either: 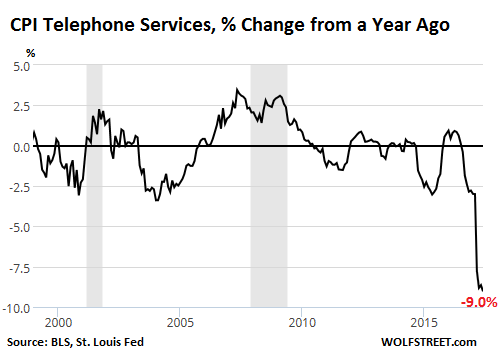 These three components – new and used vehicles, and telephone services – account for about 8% of CPI and have a significant impact on the tiny percentage changes we’re tearing our hair out over. And they’re truly “transitory.” And Yellen has been pointing this out. So Friday’s data is unlikely to change her mind.

The Fed has been raising rates and has announced a plan to unwind QE. Financial conditions should be tightening in response. But the opposite has happened. Markets have blown off the Fed. Read…  Stock and Bond Markets Blow Off Fed, Fed Gets Frustrated