The Fed and the ECB believe they can tighten and taper without killing the market so long as they jawbone this constantly.

If you’ve been reading my notes immediately before and after the June Fed meeting (“Tell My Horse” and “Post-Fed Follow-up”), you know that I think we now have a sea change in what the Fed is focused on and what their default course of action is going to be. Rather than looking for reasons to ease up on monetary policy and be more accommodative, the Fed and the ECB (and even the BOJ in their own weird way) are now looking for reasons to tighten up on monetary policy and be more restrictive. As Jamie Dimon said the other day, the tide that’s been coming in for eight years is now starting to go out. Caveat emptor.

The question, then, isn’t whether the barge of monetary policy has turned around and embarked on a tightening course – it has – the question is how fast that barge is going to move AND whether or not the market pays more attention to the actual barge movements than what the barge captain says. I promise you that the barge captains of both the Fed and the ECB believe they can tighten and taper without killing the market so long as they jawbone this constantly.

This is the Common Knowledge Game in action, this is the Missionary Effect, this is Communication Policy … this is everything that I’ve been writing about in Epsilon Theory over the past four years! And as we saw with the market’s euphoric reaction to Yellen’s prepared remarks for her Humphrey-Hawkins testimony on Weds, which were presented as oh-so dovish when they really weren’t, this jawboning strategy could absolutely work. It WILL absolutely work unless and until we get undeniably “hot” inflation numbers – particularly wage inflation numbers – from the real world.

So what’s up with that? How can we have wage inflation running at a fairly puny 2.5% (Chart 1 below) when the unemployment rate is a crazy low 4.3% (Chart 2 below) and other indicators, like the NFIB’s survey of “Small Business Job Openings Hard to Fill” (Chart 3 below) are similarly screaming for higher wages? 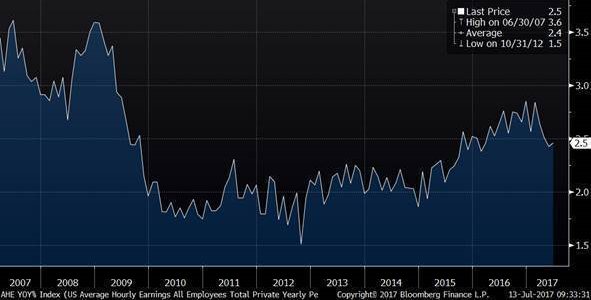 The answer, I think, can be found in Chart 4 below – vanishing labor productivity. Productivity is the amount of stuff that workers make (output) divided by the amount of time it takes them to make it (hours worked). You can have productivity growth for good reasons like in the 1980s and 1990s and early 2000s (more stuff made per hour worked as companies invested in things like the personal computer or the Internet) or bad reasons like in 2009 and 2010 (massive layoffs, so making a bit less stuff but over waaay fewer hours worked).

Productivity growth for the right reasons (I know, I sound like a contestant on “The Bachelorette”) is just about the most important economic goal that policy makers have, because it’s how you get your economy growing in a sustainable, non-inflationary way, and for the past seven years we’ve had none of it. By the way, if new technologies were really responsible for keeping wage inflation down (something I hear all the time), we would have seen that through increasing labor productivity. We haven’t. 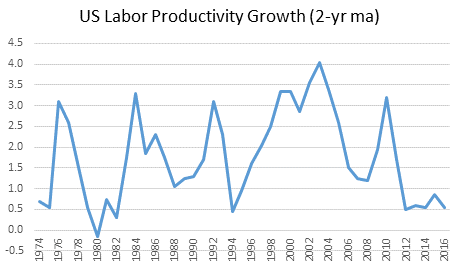 Source: Bureau of Labor Statistics as of 7/13/17. For illustrative purposes only.

This is a huge question for the Fed, maybe the biggest question they have. How is it possible – with the most accommodative monetary policy in the history of the world, with the easiest money to borrow that corporations have ever experienced, with all the amazing technological advancements that we read about day in and day out – that companies have not invested more in plant and equipment and technology to improve their labor productivity, to make more with the people they’ve got?

The answer, of course, is the answer that the Fed will never admit. The reason companies aren’t investing more aggressively in plant and equipment and technology is BECAUSE we have the most accommodative monetary policy in the history of the world, with the easiest money to borrow that corporations have ever seen.

Why in the world would companies take any risk at all when the Fed has eliminated any and all negative consequences for playing it safe? It’s like going to a college where grade inflation makes an A- the average grade. Sure, I could bust a gut to get that A, but why would I do that?

How does this apply to wage inflation? It’s the same thing. Why in the world would a company pay up to fill a position when it’s a risk they really don’t need to take? Yeah, we’ve got job openings, and yeah, our skill positions are increasingly going unfilled, and yeah, we’d like to expand and grow … I suppose. But, hey, we’re hitting our numbers just fine as it stands and, if you hadn’t noticed, our stock price hit a new high yesterday. Why mess up a good thing?

And god forbid if we actually get a tax reform bill passed. That’s the off-to-the-races moment.

And here’s my other point. In the Bizarro-world that central bankers have created over the past eight years, raising rates isn’t going to have the same inflation-dampening effect that it’s had in past tightening cycles, at least not until you get to much higher rates than you have today. It’s going to accelerate inflation by forcing risk-taking in the real world, which means that the barge is going to have to move faster and faster the more it moves at all.

My view: as the tide of QE goes out, the tide of inflation comes in. And the more that the QE tide recedes, the more inflation comes in. I know that this sounds like a nutty scenario today, with everyone talking about how inflation is dead and gone, and how the Fed will be “fighting” inflation by raising rates, but I gotta call ‘em like I see ‘em. It’s a scenario that neither central banks nor markets have contemplated in any serious way, but it’s going to be a focus for Epsilon Theory. By Ben Hunt, Chief Investment Strategist at Salient Partners

When it comes to unwinding QE, “We act like we know exactly how it’s going to happen, and we don’t.” Read… Unwinding QE will be “More Disruptive than People Think”

51 comments for “Jobs and Inflation: Gradually and Then Suddenly”