It will be ignored until it’s too late.

Everyone who’s watching the stock market has their own reasons for their endless optimism, their doom-and-gloom visions, their bouts of anxiety that come with trying to sit on the fence until the very last moment, or their blasé attitude that nothing can go wrong because the Fed has their back. But there are some factors that are like a tsunami siren that should send inhabitants scrambling to higher ground.

Since July 2012 – so over the past five years – the trailing 12-month earnings per share of all the companies in the S&P 500 index rose just 12% in total. Or just over 2% per year on average. Or barely at the rate of inflation – nothing more.

This is the most optimistic earnings number. It’s the number that data provider FactSet uses for its analyses, and these adjusted earnings seen in the most favorable light grew only a little over 2% per year on average for the S&P 500 companies over the past five years, or 12% in total.

And these adjusted earnings are now back where they’d been on March 2014, with no growth whatsoever. Total stagnation, even for adjusted earnings. And yet, over the same three-plus years, the S&P 500 index has soared 33%. 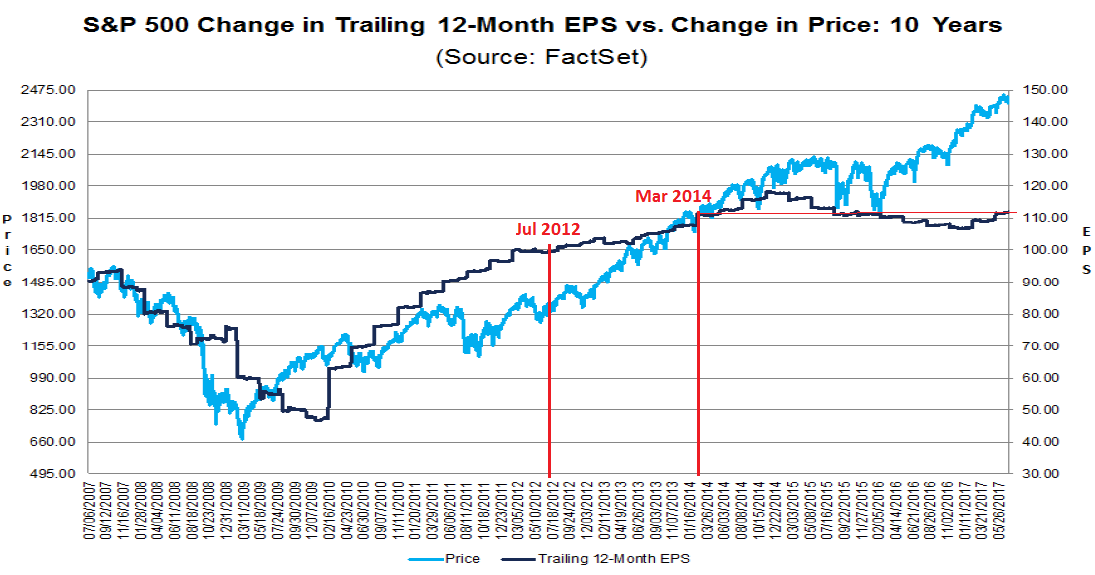 Given that there has been zero earnings growth over the past three years, even under the most optimistic “adjusted earnings” scenario, and only about 2% per year on average over the past five years, the S&P 500 companies are not high-growth companies. On average, they’re stagnating companies with stagnating earnings. And the price-earnings ratio for stagnating companies should be low. In 2012 it was around 15.5. Now, as of July 7, it is nearly 26. 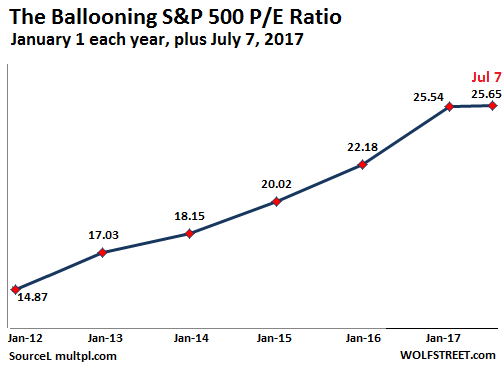 In other words, earnings didn’t expand. The only thing that expanded was the multiple of those earnings to the share prices – the P/E ratio. Such periods of multiple expansion are common. They’re part of the stock market’s boom and bust cycle. And they’re invariably followed by periods of multiple contraction.

How long can this period of multiple expansion go on? That’s what everyone wants to know. Projections include “forever.” But “forever” doesn’t exist in the stock market. The next segment of the cycle is a multiple contraction.

The 10-year average P/E ratio, using once again the inflated “adjusted earnings,” not earnings under GAAP, is 16.7, according to FactSet. This includes two big stock market bubbles, the one leading up to the Financial Crisis, and the current one, but it includes only one crash. This imbalance skews the results. Two complete cycles would bring the average substantially below 16.7.

Nevertheless, even getting back to a P/E ratio of 16.7 for the S&P 500, when the current PE ratio is 25.6, would signify either miraculously skyrocketing earnings or a sharp contraction of the market. The first option is a near impossibility. And the second option?

Markets overshoot, which is what reversion to the mean entails: the average isn’t going to be the floor! And that’s why this type of unsustainably high earnings-multiple is like a tsunami siren where the arrival time of the tsunami remains unknown – and that’s why it is ignored until it’s too late.

Already, bankruptcies are surging as the “credit cycle” exacts its pound of flesh. Read… Consumers and Businesses Buckle under their Debts