The employment data released today beat expectations nicely. In June the economy added 222,000 civilian jobs. April and May numbers were revised up. In total, over the past three months, nonfarm payrolls rose by 581,000 jobs.

This data will do nothing to deter the Fed from proceeding with its tightening plans. The Fed should never have cut its policy rate to zero, or kept it down that long, and it should have never engaged in QE. However, acting as lender-of-last-resort when credit froze during the Financial Crisis — when even GE and IBM had trouble borrowing to meet payroll — was essential to keep the system from collapsing. These short-term loans were not part of QE and were paid back. But the hangover of QE is still on the Fed’s balance sheet.

So I support whatever “normalization” efforts the Fed might undertake. They should have happened years ago.

Among the reasons the Fed wants to “normalize” policy now is to put aside some dry powder for the next recession or crisis. And it will come. Recessions are an essential part of the business cycle. If allowed to proceed, they’ll blow the cobwebs from the system, remove excess debts, and clean out the misallocation of capital – at the expense of creditors and investors. It’s a fresh start for the economy.

But here is the thing about employment and recessions: Something big changed since 2000. It can be seen in the employment-population ratio, which tracks people over 16 years of age who have jobs, as defined by the Bureau of Labor Statistics. From the 1960s until 2000, the ratio fell during recessions, but then during the recovery regained all the lost ground plus some, ratcheting up to new records after each recession. Some of this had to do with women entering the work force in large numbers.

But since the ratio’s peak in April 2000 at 64.7%, a new pattern has developed. As before, the ratio drops before the official recession begins and keeps dropping until after the recession has ended. But when employment recovers, the ratio ticks up only slowly, recovering only a fraction of the ground lost, before the next recession hits. This has happened over the last two recessions.

This time, the ratio plunged from 63.4% to 58.2% in November 2010 and again in June and July 2011. It plunged 5.2 percentage points in 4.5 years. During that time, nonfarm payrolls plunged by 8.7 million jobs. Over the seven-plus years of the jobs recovery since then, the economy added 16.7 million jobs (146.4 million nonfarm payrolls, as defined by the BLS).

But the employment-population ratio only made it to 60.1%. It regained only 1.9 percentage points, after having plunged 5.2 percentage points. In other words, after seven-plus years of jobs recovery, it has regained less than one-third of what it had lost: 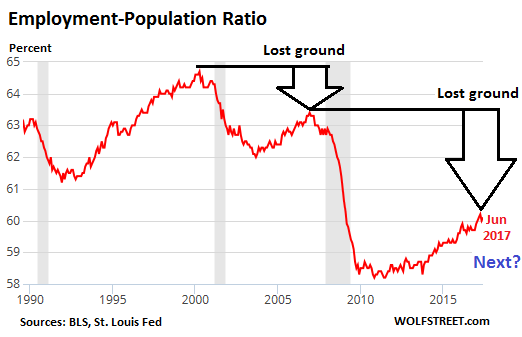 And now the Fed is preparing for the next recession.

There are all kinds of factors that move this equation one way or the other. Baby boomers are not retiring to the extent prior generations did. Millennials have fully entered into the working-age population (16 and over by this definition) though many are still in school. And according to Census Bureau estimates, the overall US population has surged by 16.7 million people from April 2010 through “today,” to 325.4 million.

Since the bottom of the employment crisis in February 2010, the economy has created 16.7 million jobs as measured by nonfarm payrolls. During the same time, the population has grown by 16.7 million people. Not all of this population growth is working age. But this is the problem that the employment-population ratio depicts: jobs are being created, but not enough for the dual task of absorbing the growth in the working-age population and in putting people back to work who lost their jobs during the recession.

And these are the good times! What happens during the next recession?

However this works out, one thing we know from the past two downturns: During the next employment downturn, the employment-population ratio will get crushed — from a much lower base than during the prior recessions. And even as the economy recovers afterwards and generates 150,000 to 220,000 jobs a month, the employment-population ratio will barely budge higher and will recapture only a fraction of the ground lost during the recession.

Automation in the service sector and in the goods-producing sector, offshoring, downsizing, the corporate mania for cost cutting, the shift to a “gig economy,” whose jobs are not fully captured in the employment data, the growth of the working-age population…. Whatever caused the downward ratcheting of the employment-population ratio with each recession, we can assume one thing: the next recession will be even tougher on people who want to work, on consumers overall, and by extension, much rougher on the economy that is so dependent on these consumers.

And this happens when the whole construct is burdened with more debt than ever before, thanks to the Fed’s eight years of experimental scorched-earth tactics to load up the economy with debt and to achieve the “wealth effect” though clearly, those tactics have not had any visibly positive impact on this employment equation.

Now bankruptcies are surging as the “credit cycle” exacts its pound of flesh. Read…  Consumers and Businesses Buckle under their Debts