Here is what happened: The Fed has been tightening by raising rates and it has announced the unwinding of QE, with only the timing being still debated – whether at the September or December meeting – and financial conditions should be tightening in response, and the Fed wants them to tighten. But the opposite has happened. Markets have blown off the Fed.

Instead of tightening, financial conditions have been easing. Over the past few months, stock prices have surged, and bond prices have risen too, as longer-term yields have fallen and yield spreads have narrowed. Members of the policy-setting Federal Open Markets Committee (FOMC) have repeatedly lamented this disconnect at their last meeting in June. This became clear in the minutes of the meeting. 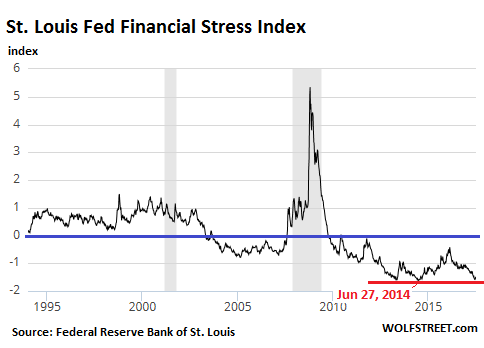 The index is based on 18 weekly data series to measure financial conditions in the market: seven interest rate series, six yield spreads, and five other indicators, including the S&P 500 index.

What has happened in recent months is that only short-term yields have risen in response to the rate hikes, but longer-term yields have fallen, spreads have narrowed, and stocks have soared.

The chart below shows the details of the index since 2014. Note the record low of -1.621 on June 27, 2014, while QE “infinity” was still raging. Financial conditions then ticked up toward “normal,” to hit a still below “normal” -0.419 in February 2016. At the time, the Fed was flip-flopping wildly on rate hikes. But since December 16, 2016, when the rate hike cycle got serious, the index continued to decline to the great frustration of the Fed: 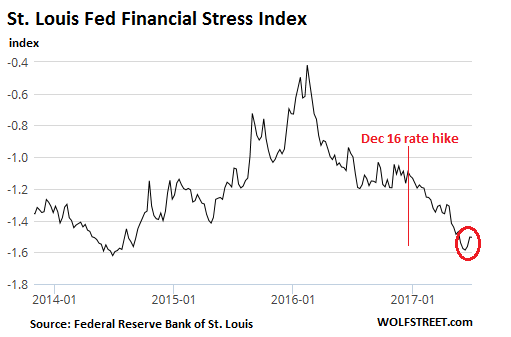 Since December’s rate-hike day, the dollar should have risen, but the opposite happened. On December 16, the dollar index (DXY), which tracks the dollar against a basket of other currencies, stood at 103. Today, it’s at 95. The dollar has fallen nearly 8% against this basket of currencies. Based on UK futures trading, the dollar fell even against the British pound.

In other words, the markets are still blowing off the Fed. And the Fed has lamented getting blown off at the FOMC meeting in June. In the minutes released yesterday, this frustration with the stubborn markets was featured several times, including in these sections (emphasis added):

“Yields on Treasury securities and the foreign exchange value of the dollar had declined modestly, while equity prices had continued to rise, contributing to a further easing of financial conditions…..”

“In their discussion of recent developments in financial markets, participants observed that, over the intermeeting period, equity prices rose, longer-term interest rates declined, and volatility in financial markets was generally low. They also noted that, according to some measures, financial conditions had eased even as the Committee reduced policy accommodation and market participants continued to expect further steps to tighten monetary policy. Participants discussed possible reasons why financial conditions had not tightened.

And the Fed is fretting ever more vociferously about asset prices and what they could do to financial stability, with a special emphasis on unwinding QE:

“[I]in the assessment of a few participants, equity prices were high when judged against standard valuation measures. Longer-term Treasury yields had declined since earlier in the year and remained low. Participants offered various explanations for low bond yields, including the prospect of sluggish longer-term economic growth as well as the elevated level of the Federal Reserve’s longer-term asset holdings. Some participants suggested that increased risk tolerance among investors might be contributing to elevated asset prices more broadly; a few participants expressed concern that subdued market volatility, coupled with a low equity premium, could lead to a buildup of risks to financial stability.

“A few participants also judged that the case for a policy rate increase at this meeting was strengthened by the easing, by some measures, in overall financial conditions over the previous six months.

So the Fed is focused on asset prices that have reached levels that threaten “financial stability” – which is Fed speak for a bubble that might implode in a major crash that could trip up the financial system.

It wants these asset prices to ease down, and it wants longer-term yields to rise (as bond prices fall), along with mortgage rates and all manner of other interest rates. It wants borrowing to get just a little harder. And it wants risks to be priced in a little more. And it will likely pursue its very gradual tightening until it sees some success in that department.

The Fed also confirmed in the minutes that there are two possible policy actions it could undertake this year in the two remaining meetings with press conferences: there is unanimous support of “balance sheet normalization,” as it calls its unwinding of QE, with only timing still being discussed – September or December. And there is some opposition to a rate hike in September. So at this point, it still looks like the Fed might make an announcement about the kick-off of the “QE Unwind” in September. And another rate hike could be in the cards for December. With more to come next year.

When QE was started in late 2008, its purpose was to inflate asset prices. The “wealth effect,” as Bernanke called it. And it worked. Unwinding QE is likely to have the opposite effect. And markets have just started to react in the slightest possible ways, with stocks in recent days easing off but hovering near their records and with longer-term yields and mortgage rates ratcheting up just a little over the past few days. But it doesn’t look like these tiny movements are enough to satisfy the Fed.

A July rate hike for Canada is “in the bag.” The Bank of England and the ECB are scrambling. Read…  “Tightening” Slugfest Erupts behind the Fed

55 comments for “Stock and Bond Markets Blow Off Fed, Fed Gets Frustrated”