Projected losses at the top 34 banks in a “severely adverse scenario.”

The comforting news in the results from the Federal Reserve’s annual stress test is that the largest 34 bank holding companies would all survive a recession.

Based on this glorious accomplishment, the clamoring has already started for regulators to allow these banks to pay bigger dividends and to blow more money on share buybacks, and for these regulators to slash regulation on these banks and make their life easier and riskier in general. We don’t want these banks to survive a recession in too good a condition apparently.

And it would likely be better for Wall Street anyway if banks could lever up with risks so that a few of them would get bailed out during the next recession. Let’s remember, for the Fed’s no-holds-barred bailout-year 2009, Wall Street executives and employees were doused with record bonuses. The Fed’s bailouts were good for them. And it has been good for them ever since.

The less comforting news in the stress test is that credit card debt – generally the most expensive and risky debt for consumers – has now moved to the top of the Fed’s worry list in the “severely adverse scenario” of the stress test. The projected losses for the 34 largest banks – not counting the losses at the 4,997 smaller banks – are expected to hit $100 billion, up nearly 9% from the stress test a year ago.

The projected losses rose for several reasons, including that credit card balances have grown by 5.6% from a year ago to over $1 trillion. The delinquency rate has risen to 2.4%. The Fed is also blaming looser lending standards.

Sharing the top spot on the Fed’s worry list in the “severely adverse scenario” are Commercial & Industrial loans, whose balances are over twice as large, at $2.1 trillion, but whose projected losses are also pegged at $100 billion.

In total, the “severely adverse scenario” sees $493 billion in losses for these 34 banks: 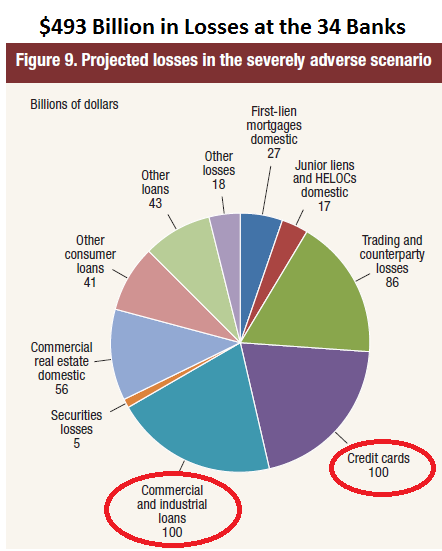 After soaring over the past two years at a rate between 5% and 6.8% year-over-year, credit card balances now exceed $1 trillion, which is about where they’d been in May 2008 just before they blew up during the Great Recession: 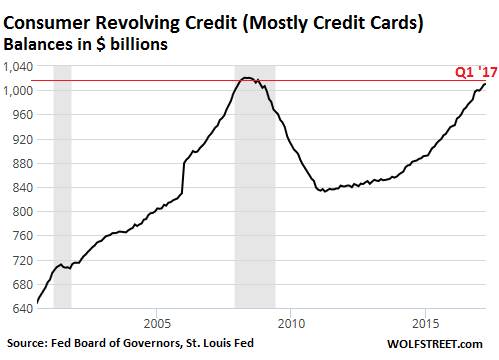 Credit card debt is the most expensive debt for consumers – and the most profitable for banks. The cost of funds for banks is still very low. But for credit cards, they lend out at 15% or 21% or even 25%. Even with relatively low balances, the interest and fee burden, once the consumer is falling behind in making payments, can quickly kick the consumer over the edge.

But then, as push comes to shove, the problem with credit card debt is that there is no collateral. When consumers default and seek bankruptcy protection, recovery by banks may be low, and loss ratios tend to be large. So these things are risky for banks.

Credit card delinquencies started ticking up a year ago and have reached 2.4% in Q1 2017. This is still low by historical standards, but these are the best of times, and the unemployment rate is low. Concern is that tapped out consumers, who are already struggling with this debt when the unemployment rate is low, will be pushed over the cliff when that severely adverse scenario kicks in with job losses. Then, credit card defaults and losses for banks will once again skyrocket.

For some banks, the risks are much higher because they issue credit cards to riskier customers. Some are already experiencing higher delinquency and net loss rates.

In the severely adverse scenario, CapitalOne came in with $21.7 billion in projected losses, up 20% from 2016. In real life, the company disclosed in its Q1 earnings report that it increased its provision for bad debts by 30% year-over-year to $1.9 billion, that the 30-day-plus delinquency rate rose to 2.9%, and that net charge-offs jumped 28% to $1.5 billion. Its rate of net charge-offs to total loans rose to 2.5%. Most of these delinquencies and losses occurred in its credit card and auto loan business. And these are the best of times!

So it’s comforting that our credit-card debt slaves, who had shown signs of unwelcome prudence after the Great Recession, are kicking that nasty habit and are once again splurging on things they can’t afford and are charging them on their credit cards to pay out of their nose for them. It’s good for GDP, which needs all the help it can get. And it’s good for the banks, which make a ton of money on credit card balances. And when push comes to shove, and the banks get hit, well then, let the Fed deal with it, no?

The Debt Slaves are beginning to buckle under their loads. Read…  Great Debt Unwind: Bankruptcies by Consumers and Businesses Jump