After its most tumultuous week since the bailout days of 2012, Spain’s banking system is gripped by a climate of fear, uncertainty and distrust. Rather than allaying investor nerves, the shotgun bail-in and sale of Banco Popular to Santander on Tuesday has merely intensified them. For the first time since the Global Financial Crisis, shareholders and subordinate bondholders of a failing Spanish bank were not bailed out by taxpayers; they took risks in order to make a buck, and they bore the consequences. That’s how it should be. But bank investors don’t like not getting bailed out.

Now they’re worrying it could happen again. As Popular’s final days showed, once confidence and trust in a bank vanishes, it’s almost impossible to restore them. The fear has now spread to Spain’s eighth largest lender, Liberbank, a mini-Bankia that was spawned in 2011 from the forced marriage of three failed cajas (savings banks), Cajastur, Caja de Extremadura and Caja Cantabria.

But since the bail-in of Popular, Liberbank’s shares have seriously crashed as panicked investors fled. Scenting fresh blood, short sellers were piling in. On Friday alone, shares plunged another 17%. At one point, they were down 38% before bouncing at the close of trading, much of it driven by the bank’s own share buybacks: 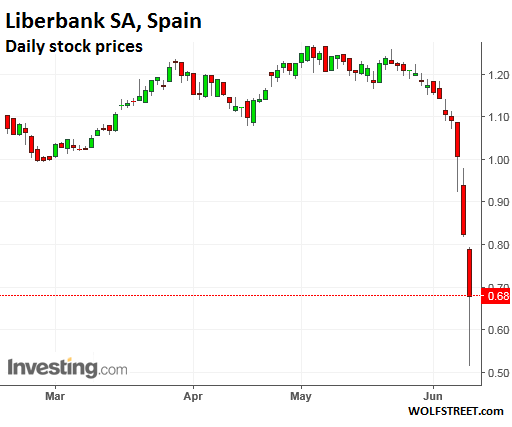 In the last three weeks a whole year’s worth of steadily rising gains on the stock market have been completely wiped out. The main causes of concern are the bank’s high risk profile and low coverage rate. By the close of the first quarter of 2017, Liberbank’s default rate had reached 13%, over three percentage points higher than the national average (9.8%), while its unproductive asset coverage rate was just 42.1%, compared to 47% for Banco Sabadell, 48% for Bankia, 50% for CaixaBank and 55% for Unicaja.

Worse still, the vast bulk of the bank’s unproductive assets are real estate investments. After Popular, it is the Spanish entity with most exposure to toxic real estate assets, according to the financial daily El Confidencial — a remarkable feat given the bank already had the lion’s share of its impaired real estate assets transferred onto the balance sheets of Spain’s “bad bank,” Sareb.

It’s not just the bank’s shares that are feeling the pressure. With the memory of what happened to holders of Popular’s junior, subordinate and convertible debt still fresh in their mind, investors are divesting their exposure to Liberbank’s subordinate debt. On Friday alone the bank’s most recent issuance, dating back to March 2017, generated losses of 9.8%.

Liberbank’s management has responded the only way it can — with a slew of denials. The bank is nothing like Popular, it says. It is solidly solvent and its deposits are safe, which is probably true: even the deposits of Popular’s customers are now safe despite the fact the bank had hemmorhaged €18 billion of deposits in the last few weeks of its truncated existence. It was this frantic run on deposits that ultimately sealed its fate, prompting the ECB to conclude that the bank was “failing or likely to fail.”

Banco Popular’s demise is a stark reminder that Europe’s banking woes are far from resolved, despite the trillions of euros thrown at them. “The message the market is sending is that you have to buy solvent banks and stay away from those that pose high risks,” said Rafael Alonso, an analyst at Bankinter, one of Spain’s more solvent banks.

Another Spanish bank that could be considered to pose high risks is Unicaja, the product of another merger of failed cajas that is (or at least was) scheduled to launch its IPO some time in June or July. As things currently stand, the timing could not be worse. The greater the uncertainty over Liberbank’s future, the lower the projected valuation of Unicaja’s IPO falls. Before Popular’s forced bail-in and acquisition, the Unicaja was valued at around €2.3 billion; now, just days later, it’s valued at less than €1.9 billion. If the trend continues, the IPO will almost certainly be shelved.

As for Liberbank, if things don’t improve soon and investor nerves aren’t steadied, it too could find itself on the ECB’s Single Resolution Board’s chopping board. Perhaps it too will be sold for €1 to a much larger bank that, like Santander, is able to raise billions of euros of new funds at the drop of a hat, with other too-big-to-fail banks like UBS and Citibank more than happy to lend a helping hand. And just like that, another smaller bank would bite the dust while the biggest banks get bigger and ever more dominating in the market. By Don Quijones.

Many Banco Popular investors wiped out. Taxpayers off the hook. What it means for Italy. Read…  “Bail-In” Era for Europe’s Banking Crisis Begins

29 comments for “Is Another Spanish Bank about to Bite the Dust?”