Shares of rental-car conglomerate Hertz Global Holdings closed at $14.98 on Friday, after reaching an all-time low of $14.32 on Thursday. These shares have only been around since last June, when Hertz spun off its equipment leasing division. They’ve plunged 73% from their high last July.

Hertz will report first quarter earnings on Monday. In the fourth quarter, it lost $440 million or $5.30 a share, much worse than “expected.” Expectations for Q1 are so low that it will be hard to report “worse than expected” numbers.

November 9 was its big day. Its shares plunged 52% to $17.20. Carl Icahn had been vociferously hyping and buying the shares, including 15 million shares during the plunge. He has lost money relentlessly.

That day, Hertz doused car-befuddled Wall Street analysts with a dose of reality about the auto bubble. Deprecation of its vehicles was soaring as residual values were dropping. It also cited falling rental volume and falling rental rates in the US.

In 2015, it was forced to restate earnings due to accounting “errors” going back to 2011 and announced it was being investigated by the SEC.

Hertz, which is junk-rated and has $15 billion in debt, including $9.45 billion in “vehicle debt,” has a tidal wave of bond maturities coming its way that it must figure out how to refinance. Some of its deteriorating metrics have breached debt covenants, and it has been forced to negotiate with its creditors to amend the creditor agreement to avoid technical default.

Now it’s “again at risk of being driven back to the negotiating table for another round of covenant revisions, according to a lender and two sellside analysts,” Debtwire reported, adding: “Another covenant breach could jeopardize liquidity, since the bulk of liquidity is stored in the Barclays-agented revolver, the sources noted.”

So Hertz has, let’s say, some issues. But there is something else going on, something structural that impacts the entire industry.

Rideshare companies such as Uber and Lyft are eating its lunch. OK, competition might not be all that fair. While Hertz gets keelhauled when it loses a few hundred millions dollars, Uber is considered a hero when it loses billions of dollars [Uber Confirms Horrendous Loss in 2016].

It’s easy to plow down competition when burning unlimited amounts of investor cash is part of the business model. This allows Uber to undercut any kind of competition.

Data on the extent to which rideshare companies are taking market share from rental car companies is still sketchy. But there are some early indications.

This chart shows how corporate spending on ground transportation was divvied up between rental cars (red line) and Uber (blue line) in Q4 of the past three years, according to a sellside analyst cited by Debtwire. Not shown: taxis, whose share is getting decimated. 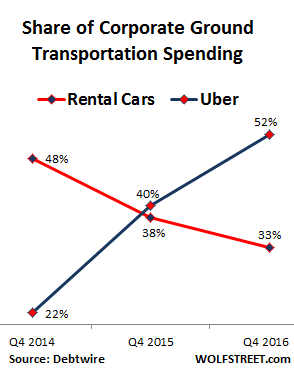 This is largely corroborated by Manheim’s 2017 Used Car Market Report, citing an analysis of business travel expenses by Certify SmartSpend, which pegged the market share of Uber and Lyft in Q3 2016 at 52% of ground transportation spending, up from 46% in Q3 2015. The share of rental cars dropped to 36%, and the share of taxis to 12%.

Even if these numbers – like so many numbers – are extrapolated from limited data, and to be taken with a grain of salt, they nevertheless show a terrible trend for rental car companies in that segment of their business.

This does not include spending by non-expense-account tourists. They too are shifting from rental cars to rideshare companies to get around in a city. They don’t have to worry about driving and parking in an unknown city. And it could turn out to be cheaper, given the cost of renting, fuel, and parking (not to speak of parking tickets). I see this shift in San Francisco on a massive scale.

This is a structural shift. And it will get bigger. Rideshare companies are not only hammering taxi enterprises, they’re also hammering rental car companies in that segment of their business.

But in 2016, rental car companies bought 1.82 million vehicles – the most since 2007. So the fleet isn’t exactly shrinking. But revenue per vehicle, a key industry metric, has been shrinking since 2012. Hence the term, “over-fleeted.” Something has to give.

To shrink their fleets, they’ll have to dump more vehicles on the wholesale market. But the wholesale market is already under pressure from the tsunami of cars that are coming off leases. In its recently released April Used Car Guidelines, the National Automobile Dealer Association reported that values of vehicles up to 8 years old fell 7.2% year-over-year to the lowest level since 2010. Note the price bubble in the years after the Financial Crisis: 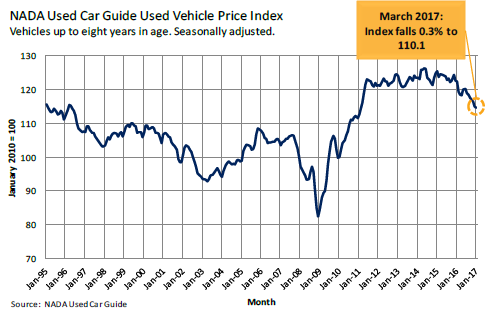 It isn’t going to be easy for rental car companies to rightsize their fleets without incurring large losses. And by rightsizing their fleets, they will further pressure used vehicle values. At the same time, rideshare companies, which can burn as much cash as they want to and still be heroes, are relentlessly eating into that segment.

This has ramifications for new vehicle sales: rental car companies are unlikely to increase their vehicle purchases, which could further pressure new vehicle sales. They’re already declining, despite record incentives, as inventory bloat spreads to zombie retail malls. Read…  #Carmageddon Not Yet, But Hot Air Hisses out of Auto Bubble

65 comments for “Answers Emerge: This is How Badly Uber Eats into Hertz”