It was a historic election in France: Emmanuel Macron will become the youngest president in French history, and the first one ever whose party “En Marche!” doesn’t have a single representative in the National Assembly, the lower house of parliament.

Legislative elections are coming up in June, but En Marche! won’t be able to replace a large number of entrenched representatives. In other words, the National Assembly, which, among other things, must pass all budget legislation and labor law reforms, will be controlled by the opposition, which might not eagerly jump through the unpopular hoops of his program.

Before he ran, Macron was briefly Economy Minister under the current regime and member of the Socialist Party. He’s a pro-euro, pro-EU globalist who faces 10% unemployment, 25% youth unemployment, and a lot of frustrated people.

Macron ran on free trade and further EU integration, pledged to reform the rigid labor market, and promised to reduce the budget deficit. He will now be tempted to mistake his landslide victory for a mandate. But instead of a mandate, much of the vote he obtained was an expression of the collapse of the establishment parties and their candidates whose policies have led to the current conditions.

No one has been able to reform the labor market in a significant manner in recent years even as private enterprise is suffocating and cannot hire. Spending by the enormous government-controlled apparatus in France accounts for 57% of GDP, the second highest in the EU, behind Finland and ahead of Denmark; so cutting the deficit, and thus cutting part of the economy, is unlikely to be popular in Parliament or elsewhere, and he will soon feel the hot breath of a backlash.

Given his campaign statements, his victory was supposed to have boosted markets – perhaps even on the principle that everything these days is supposed to boost markets. But everything is now fizzling.

Well, not everything, Japanese stocks soared 2.4%, either on early enthusiasm by international hedge funds for Macron or on hopes for continued Bank of Japan money-printing and stock buying, which isn’t a surprise either. And Hong Kong’s Hang Seng rose 0.4%. But stocks in China continued to deteriorate; the Shanghai index dropped 0.9%. It’s down 6.4% from about a month ago and at the lowest point since October 17.

The euro, after briefly touching a one-year high of $1.102 on Sunday at the first blush of election indications, has now fallen back to $1.093 where it was on May 4: 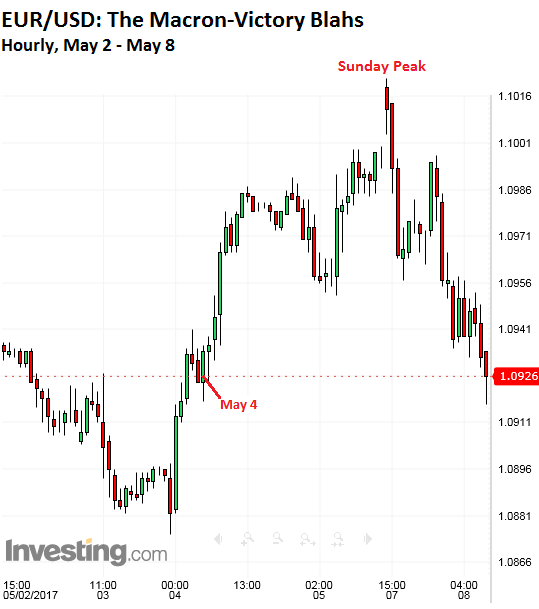 The major European indices are having the blahs, instead of turning victory laps. The German DAX is slightly in the red. The French CAC 40 is down nearly 1%. Spanish and Italian indices have dropped into the red too. The only major index now green is the UK’s – the only EU country to ever vote to leave the EU – with FTSE 100 up a smidgen. Ah, the unfairness of it all….

Oil, which had gotten hammered in recent weeks, was up earlier but is now in the red, with WTI at the moment changing hands at $45.96 a barrel.

US stock market just opened, and it’s too early to be wisecracking about the indices and their direction for the day. But they too are having the blahs, now in the red a tiny bit.

This leaves us wondering: Where the heck is the promised Macron rally – now that France’s next president isn’t going to try to blow up the Eurozone and the EU? Perhaps it has something to do with the simple fact that France’s problems, and the larger problems of Italy, particularly those of its banks, and the problems of the EU, and the global issues are all still there, none of them solved by this election.

But now the hoopla of the election is receding into the background, and reality – ludicrously over-inflated asset prices after eight years of central-bank machinations just about everywhere despite lackluster demand in the real economy – is reasserting itself.

Uber, which burns a lot more cash than Hertz, is a hero, while Hertz gets keelhauled as the paradigm is shifting. Read… Answers Emerge: This is How Badly Uber Eats into Hertz

34 comments for “Where the Heck is the Macron-Victory Rally?”