Prices of collector cars fell again, according to the April report by Hagerty, which specializes in insuring vintage automobiles. After a tremendous price surge that peaked in 2015, they’ve been ratcheting their way down ever so slowly. But it adds up after a while.

Expert sentiment dropped for the first time since November. Market observers have cited that many cars with prior auction results have been changing hands for less money than in the past.

The Hagerty Market Index, which is adjusted for inflation and is based on changes in dollars and volume of the market, fell about 20% during the Great Recession, then surged 75% on an inflation-adjusted basis to its peak in September 2015. Since then, it has been heading back down. It has now fallen nearly 25 points from its peak, exceeding its point decline during the Financial Crisis: 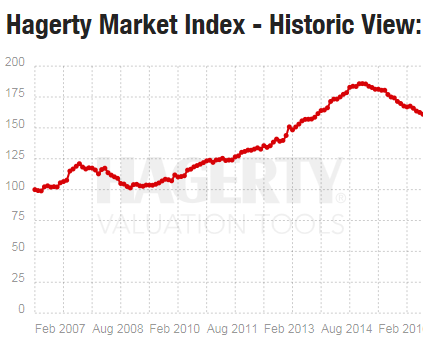 The data includes the results from the collectible automobile auction on Amelia Island off the coast of Florida on March 10-12. The auction had been hyped with the usual fanfare to stir up the animal spirits’ desire for beautiful machines.

“In recent years the Amelia Island Auctions have quickly emerged as a significant indicator for the public auctions segment of the classic car market,” Jonathan Klinger, the spokesman for Hagerty, told Bloomberg before the auction. “It is no longer just Arizona auctions in January and Monterey in August that matter.”

The auction was going to be hot. Bloomberg:

According to Hagerty predictions, the final cull will be $135 million to $140 million among all five auction companies that will sell there this year (RM Sotheby’s, Gooding & Co., Bonhams, Hollywood Wheels, and Motostalgia).

The article showcased “the highest-priced individual standout cars among the lot,” and I added in bold what then happened to them at the auction:

Yep, the top three most hyped cars didn’t sell! Rounding off the top ten cars, there were these seven gorgeous machines, according to the New Atlas (results in bold):

New Atlas blamed the weather and “all the disparate factors that influenced the weekend and the sale” – such as the absence of a Ferrari 250 GT SWB California Spyder that sold last year for $17.2 million or the Jerry Seinfeld Porsche Collection which sold for $22.2 million last year, when the market was still hot – and so the result “doesn’t mean much.”

In the grander scheme of things, and as a red flag, this is another asset class that has enormously benefited from asset price inflation, stirred up by the Fed’s well-targeted monetary policies since the Financial Crisis. But prices peaked shortly after QE ended and have ratcheted lower in tiny increments. While stocks got a huge boost since the US election, classic car investors appear to not have gotten the memo – or perhaps they can see the writing on the wall, with sellers becoming more eager and buyers more careful?

The American economy has split in two, but the aggregate numbers of wealth and debt obscure the profound risks. Read… So Who Are the Debt Slaves in this Rich Nation?

74 comments for “What the Heck’s Going On with Classic Cars?”