Where the heck is the Foreign Money when you need it?

The market for office buildings in one of the hottest and most overheated real-estate markets in the world, New York City, just went into the deep-freeze. If you see the word “plunge” a lot below, it’s because that’s what happened in the first quarter of 2017.

According to Commercial Café, which analyzed data from Yardi Matrix and PropertyShark, that $2.1 billion in Q1 office sales, in total 10 deals, was down an ear-ringing 80% from the $10.3 billion, and 26 deals in Q1 2015.

This chart shows the plunge in billion dollars: 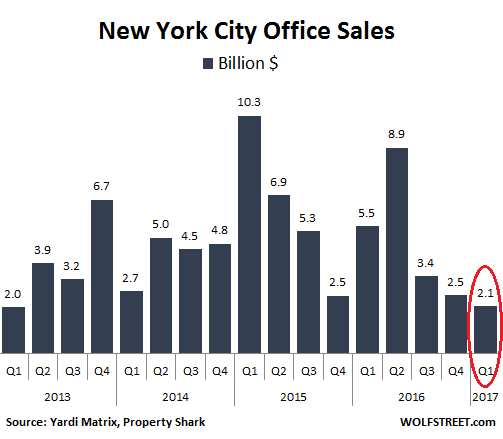 In terms of square footage sold, a similarly ugly picture emerges. Sales plunged 39% year-over-year to 2.8 million square feet, the lowest in the data series going back to 2013, and down 74% from the glory days of Q1 2015: 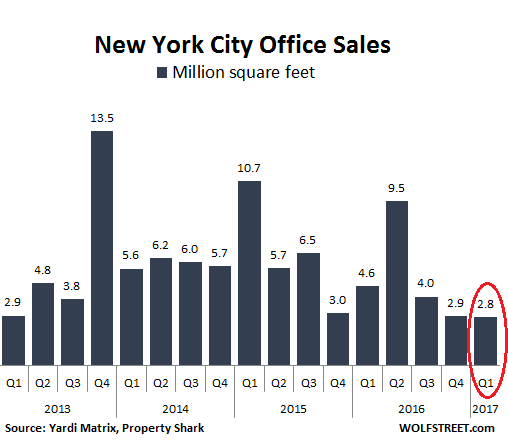 Yet with the presidential election now in the rearview mirror, and with the unemployment rate at a record low of 4.8% as of February, the market is likely to pick up steam over the following months.

It sure would be nice. And some bounce-back is likely. Nothing plunges like this without some sort of rebound – based on the time-honored theory that nothing goes to heck in a straight line. But the rebound better be huge to put the market back on track. And that looks unlikely.

Of the 10 deals, 8 properties were located in Manhattan and 2 in Brooklyn. The largest transaction, at $1.04 billion, was Asian money. Commercial Café:

Singaporean sovereign wealth fund GIC acquired a 95% stake in 60 Wall St. from Paramount Group, for $1.04 billion. As a result, Paramount will retain a 5% stake in the Downtown Manhattan property, which houses Deutsche Bank’s U.S. headquarters. The banking giant is the sole tenant of the 47-story, 1.6 million-square-foot office tower.

But that was the only one of the 10 largest deals where the acquirer was a foreign entity. Where did all the Asian money go?

In 2016 in the US overall – a year when office sales fell 7% and leasing activity was hampered by office tenants that were “reluctant to make any major moves pending the conclusion of the presidential election” – offshore buyers accounted for 43% of the 50 largest office deals. And those from Asia alone accounted for 16%!

These were the trophy transactions that got global attention. Foreign entities were involved in innumerable smaller deals that only got local attention. But in Q1, these foreign entities – whether sovereign wealth funds or shady newly-minted mega-insurance companies – didn’t show up in New York City.

Hope remains that this will work out somehow, that Q1 isn’t going to be an indicator for what the rest of the year will look like. And so Commercial Café expects the New York City office market “to pick up steam in the upcoming months.” And that would require a slew of foreign buyers to materialize.

A bubble continues to expand until enough buyers lose interest in the lofty valuations and in the slim financial opportunities, if any, that these deals at the peak offer. Then it begins to deflate. Commercial real estate, not only in New York City but in the US overall, has been in a phenomenal boom that started in 2009 with property prices and rents both soaring for eight years straight.

The big freeze in New York City may be another sign that this bubble too can only go so far, and that peak craziness has been reached. The Fed is now specifically fretting about this commercial real estate bubble, and how to contain it before it takes down the financial system. Read…  Commercial & Residential Real-Estate Bubble once again a Risk to “Financial Stability,” and the Fed is Worried