If history is the guide, you’re on your own.

The Fed has planted three separate warnings on high stock prices into its March-meeting Minutes, released last week. In the past, the Fed has warned on various occasions on high stock prices, with, let’s say mixed results. Stocks have crashed after warnings, and they have crashed without warnings, and they have soared after warnings.

Perhaps the most infamous warning on stock prices was when Fed Chairman Alan Greenspan on December 5, 1996, said in a speech that “irrational exuberance has unduly escalated asset values.” Stocks quaked in their boots for about one breath then soared for another three years and three months before totally crashing.

So now we’re getting a slew of Fed warnings. The most recent – three of them at once – were spread across the Minutes of the March meeting:

Broad U.S. equity price indexes increased over the intermeeting period, and some measures of valuations, such as price-to-earnings ratios, rose further above historical norms. A standard measure of the equity risk premium edged lower, declining into the lower quartile of its historical distribution of the previous three decades.

And here is what Greenspan said on that fateful December 5, 1996. Note the implications as he saw them for monetary policy:

But how do we know when irrational exuberance has unduly escalated asset values, which then become subject to unexpected and prolonged contractions as they have in Japan over the past decade? And how do we factor that assessment into monetary policy?

We as central bankers need not be concerned if a collapsing financial asset bubble does not threaten to impair the real economy, its production, jobs, and price stability. Indeed, the sharp stock market break of 1987 had few negative consequences for the economy.

But we should not underestimate or become complacent about the complexity of the interactions of asset markets and the economy. Thus, evaluating shifts in balance sheets generally, and in asset prices particularly, must be an integral part of the development of monetary policy.

Upon Greenspan’s warning, stocks barely wobbled long enough to notice before they skyrocketed into what would become the Dotcom Bubble … and the Dotcom Crash three years and three months later. While Greenspan might not have worried about falling stock prices per se in his speech, he still got cold feet deep into the crash and radically lowered interest rates, thus kicking off the credit bubble that also contained a housing bubble, all of which collapsed.

So how did stocks behave after warnings from the Fed? This chart by John Alexander at Macro Charting shows the S&P 500 Index going back to the early 1990s. The green dots signify Fed warnings on stock valuations: 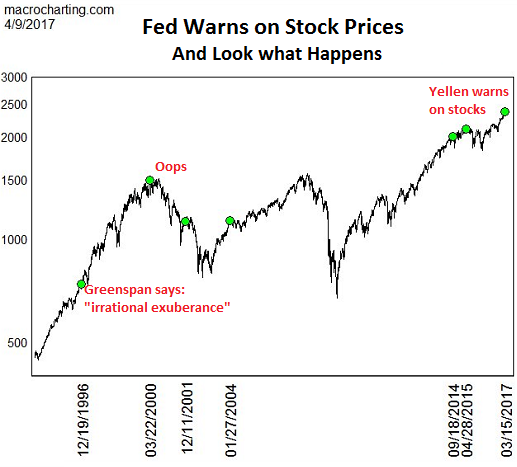 “Sometimes it’s a sell signal, sometimes it’s a buy signal,” says John Alexander. And sometime it’s a crash signal. So how long before the stock market hits the wall? Turns out, it’s overdue….  This is Worse than Before the Last Three Crashes.

But here’s the thing: there is so much liquidity out there, supplied to this day by central banks around the world that it would take some doing to get a crash going. In recent years, market participants have forgotten the lessons of the crash and have re-learned the lesson of the bull market: just buy the effing dip. When applied with enough enthusiasm by humans, and if enough trading algos have been programmed to do so, it stops the crash, at least for a while.

Thus it’s unlikely that stocks can actually crash all in one fell swoop, as they did during the Financial Crisis. It’s more likely that, once they decide to head south, they’ll work their way down gradually, frustratingly, and nervously, spread over years, not because of the Fed’s warning, but because of the myriad reasons lurking around every corner, such as the ludicrously stretched valuations, the Fed’s tightening including the unwinding of QE starting later this year, and the bitter end of the credit cycle.

There have been big red flags about the bitter end of the credit cycle: Commercial bankruptcy filings, from corporations to sole proprietorships, soared 37% over the past 24 months. Read…  Great Debt Unwind: Consumer Bankruptcies Jump, First since 2010. Commercial Bankruptcies Spike

43 comments for “Buy, Sell, or Crash? Fed Warns on Stocks and Look what Happens”