That the Houston economy – however diversified and huge it may be – got hit hard by the oil bust is an understatement. The oil & gas sector created not only a lot of high-paying jobs, many of them tech jobs, but also kicked off an enormous construction boom in the office sector. A chemical-plant construction boom followed. This came on top of a nationwide healthcare construction boom. The construction industry was on cloud nine!

But now the office sector is drowning in empty space on the sublease market even as new towers are being completed. The chemical-plant construction boom peaked in early 2015. Construction projects are being cancelled and put on hold, and the entire construction sector has collapsed.

Construction booms of the magnificent kind that Houston experienced after the Financial Crisis boost the local economy in many ways, from raw materials to labor, and they support a wide variety of other sectors, such as the retail and restaurant sectors – and auto sales.

Employment in the goods producing sector, which include the high-paying jobs in construction and oil & gas, fell 4.5% in February year-over-year and 6.5% year-to-date. But total employment, with support from hiring by government entities and the service sector, has been about flat.

While total retail sales in Houston dropped “only” 4.7% year-to-date, new vehicles sales crashed. Everything in its own time: first oil & gas, then construction, then new vehicles. For auto dealers it’s a brutal reality

Auto dealers in the Houston metro sold 21,434 new vehicles in February, down 20.1% year-over-year, according to TexAuto Facts, published by InfoNation, and cited today by Greater Houston Partnership. It was the 14th month in a row of year-over-year declines.

This chart of rolling 12-month new vehicle sales shows the collapse during the financial crisis, the boom afterwards, and the current collapse (via Greater Houston Partnership, red marks added): 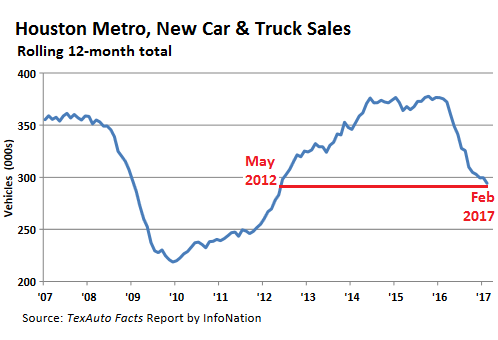 Ironically, or perhaps not so ironically, the average retail sales price per new vehicle in February hit an all-time record of $36,755. This is in part caused by the continuing shift from cars to larger and more expensive trucks and SUVs, which account for 66.2% of total sales in Houston – compared to the national average of 62.3%, according to AutoData.

Houston’s hosting the Super Bowl was also blamed for the February debacle as apparently fears of traffic congestion kept car buyers at home or focused on other things. It turned that weekend into a particularly morose affair for car dealers. But that one weekend doesn’t have much impact on the rolling 12-month total sales, which are still in free fall.

There are about 175 new car and truck dealers in the Houston Metro area, with over 30,000 employees, according to the Houston Automobile Dealers Association. It’s big business. But this is how the oil bust reverberates through an economy that is still uncomfortably dependent, despite all efforts of diversification, on the oil & gas sector.

The Fed is way behind the curve, but at least it now acknowledges seeing the curve. Read… Inflation Hits Consumers, Mortgage Rates Take Off, “Financial Repression” for Bondholders and Savers

34 comments for “How Auto Sales Are Getting Crushed in Houston”