Brazil is in the middle of a political and corruption crisis blooming on the verdant pastures of an economic and fiscal crisis that has now produced a second year of recession in a row, with the financial curse of the Olympics still hanging over the country for years to come.

Nearly 12 million people were counted as unemployed in December. The number of employed fell to 90.4 million, from 92.1 million a year earlier. The unemployment rate has steadily climbed to reach 12% in December, up from 6.5% in December two years earlier (via Trading Economics):

And consumers have reached a breaking point. The government’s statistics agency IBGE reported today that its narrower measure of retail sales, which excludes cars and building materials, dropped 4.9% year-over year in December, “frustrating hopes that end-year markdowns would boost demand for electronics and home appliances,” as Reuters put it.

This chart shows the year-over-year changes in retail sales, excluding cars and building materials (via Trading Economics). The weakness in retail started in 2014 and deteriorated sharply from then on: 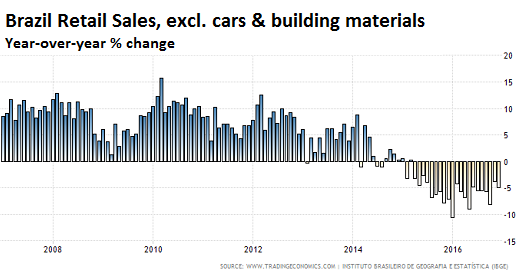 A broader measure of retail sales, which includes cars and building materials, plunged 8.7% in 2016, according to IBGE. This is in part due to the steady collapse of vehicle sales.

In January, total vehicle sales dropped to 121,400 vehicles, the lowest in over a decade.

In December, typically one of the best months of the year, sales plunged 10% to 170,000 vehicles from 190,000 a year earlier and were down 37% from two years earlier. This compares to the record in sales, set in August 2012, of 353,000 vehicles, when the “Buy BRICS” was still pandemic Goldman Sachs hype (via Trading Economics):

Despite the sharp economic decline over the past two years in Brazil, consumer price inflation has been red-hot, ranging mostly above 6% year-over-year, and peaking in the double-digits at the end of 2015 and early 2016. As far as inflation is concerned: no demand, no problem.

The central bank has been trying to tamp down on inflation by raising its benchmark interest rate above 14% for a year through November 2016, though it has since lowered it to 13%. With some success: inflation has been dropping to a still withering 5.3% in January (via Trading Economics): 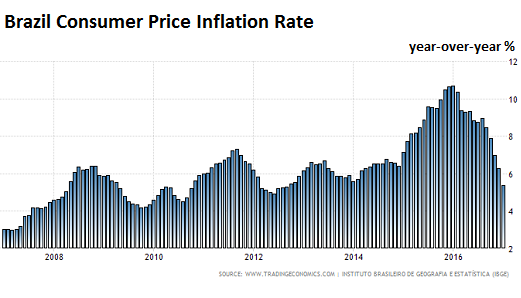 Inflation – and it doesn’t have to be hyperinflation – can be vicious for workers, consumers, and creditors (though it’s the best thing since sliced bread for heavy debtors). This connection between inflation and consumption in a declining economy with high unemployment is something inflation-mongers in the US should keep in mind.

Here is the effect of “supply shocks.” Read…  This is What Happens to Inflation when a Currency Gets Unpegged from the Dollar