Companies needing to lease office space in New York City get this piece of advice by global real-estate service provider Savills Studley in its Q4 report:

“Companies need to drown out the noise and ignore real estate’s own version of fake news – the threat that demand is as strong as ever and rent will always rise.”

Turns out, despite the hype of the industry, the vaunted and ludicrously expensive office space market in New York City peaked somewhere between the end of 2014 and mid-2016, both in terms of sales and leasing.

The number of sales of office buildings in 2016 valued at over $5 million plunged 16% from a year earlier to just 128 buildings, the lowest since 2013, according to a report by CommercialCafé, a sister company of Property Shark (transactions recorded up until Jan. 25, 2017): 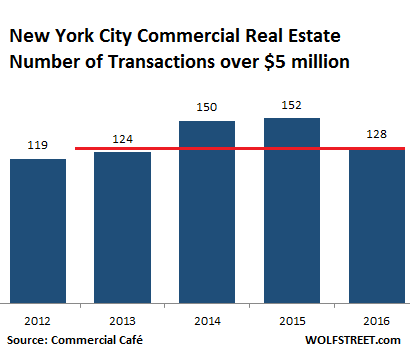 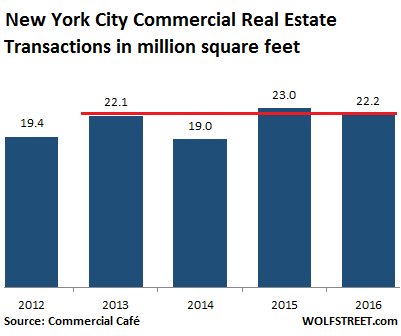 Even as volume declined, the average price per square foot rose 7% from a year ago to $1,347 per square foot – up 40% from 2012. Could that be the reason for the decline in sales volume? That it’s getting too expensive and demand is drying up at these prices as leasing activity, which makes all this possible, is stalling (more on that in a moment)?

But wait – real estate is local…

Getting dizzy? It’s mixed, as they say.

Who was buying? Over half of the 20 largest office sales in 2016, according to CommercialCafé, were “driven partially or exclusively by foreign capital.”

Time on the market: The time Class A direct office space spends on the market before it is leased is approaching 11 months on average.

More supply will flood the market: 4.8 million square feet (msf) due to “known future moveouts,” and another 6.4 msf of unleased space in buildings to be completed.

Total sublet supply – when companies are trying to sublease unneeded office space to another company – jumped 24% over a period of six months 10.4 msf in December.

This is pouring cold water on rents. Overall, asking rents fell by 2.6% to $72.96 per square foot. In Midtown, Class A asking rents fell by 4.4% to $84.92 – its lowest mark since early 2015. But those are asking rents. To make deals, and hide the weakness in rents, landlords are pushing concessions “even higher into record territory.”

This is a “gradual tilt” in favor of tenants that Savills Studley expects to continue this year.

The report finds “some convergence” between the dynamics in the office, retail, and residential markets: “all are reporting decelerating leasing and sales velocity.”

While most companies want to remain in Manhattan, they’re reducing their footprint, and “landlords are competing with one another for a shrinking tenant base”:

Office employment has increased by over 150,000 in New York City since 2009, but the amount of space occupied in the same period has actually decreased by approximately 10 msf.

So this is not a collapse, but a gradual systematic decline with different factors at work:

Manhattan’s vibrant tech and creative sector provided a counterbalance to some of the contraction among banks and law firms, but tech companies have been tightening their belts in 2016 as well. Hospitals, schools, and coworking facilities filled some of the gap in demand among traditional space occupiers. Some of the space was repurposed as retail but there is a limit to how many curated food courts the market can digest.

And so, Joe Genovesi, Executive Managing Director at Savills Studley in New York, concludes: “Sooner or later the market turns. The shift to tenant’s favor is becoming more apparent heading into 2017.”

And San Francisco’s office leasing market has worst year since 2009. Read…   “Rightsizing Has Once Again Come to the Tech Sector”