The scourge of consumer price deflation has been brandished furiously by central banks around the world in order to justify radical, scorched-earth monetary policies, including zero-interest-rate policy (ZIRP), the entire absurdity of negative-interest-rate policy (NIRP), and asset purchases not only of government bonds but also of everything else, depending on the central bank, including corporate bonds, stocks, asset-backed securities, and, as German politician Frank Schäffler predicted with uncanny accuracy back in September 2011, “old bicycles.”

Central banks have also brandished the threat of other mayhem that could befall the earth if it weren’t for those policies, but the threat of consumer price deflation has played a critical role.

Well, those of you in the US, don’t worry: your overall prices, as determined by the Consumer Price Index, now have exactly 0% chance of dropping over the next five years, down from a probability of 14.1% in May last year.

This is according to the Atlanta Fed’s closely watched “Deflation Probabilities” indicator – closely watched  by me, if no one else, because in my entire life, I’ve suffered through three quarters of mild year-over-year deflation (when prices were slightly lower than a year earlier) during the Financial Crisis, but many decades of inflation, including some in the double digits.

And during those three quarters of deflation, I experienced firsthand the horrors of discovering that I could actually buy more things with the same amount of dollars. My wretched dollars were gaining value! It was outright terrifying! I actually ended up buying more to get rid of those excess dollars and to benefit from the good deals!

And so I’m glad that the probability of this evil condition returning to the US over the next five years has fallen to 0%.

This chart is based on data from the Atlanta Fed. It shows the probabilities, as registered over time, that CPI in April 2021 will be below its April 2016 level (which is when this data series begins). This series started out high due to the collapse in oil prices: 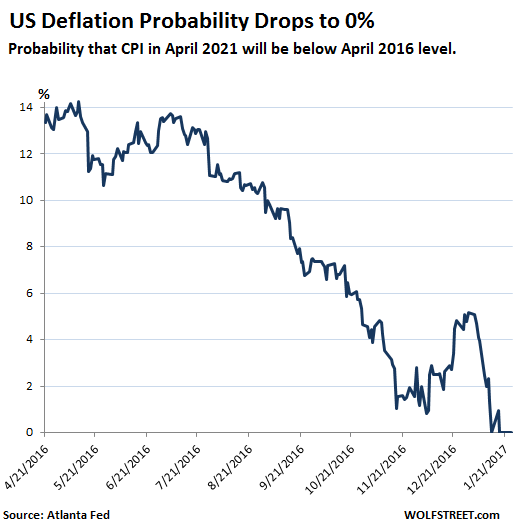 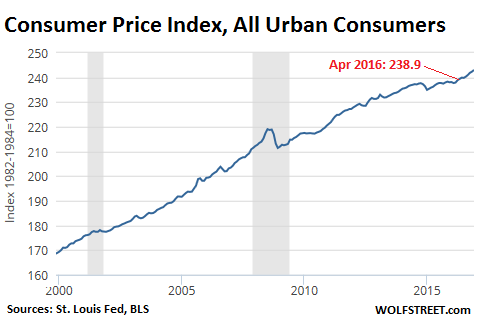 The Atlanta Fed’s Deflation Probabilities indicator is based on estimates derived from the markets for Treasury Inflation-Protected Securities (TIPS). Technical explanation is here. So these data points are the consolidated predictions made on a daily basis over time by the many participants in a very nervous US government bond market.

And they’re not worried one bit about deflation through 2021. They’re worried about inflation.

The Fed and the US Treasury, in an effort to create some asset price inflation after the Financial Crisis, have encouraged Wall Street to enter the single-family housing market, buy these homes out of foreclosure, drive up prices, and put them on the rental market. Things have taken off from there. And now, the government even agreed to guarantee for the first time ever Buy-to-Rent Mortgage-Backed Securities. Wall Street wins again. Read…  Financialization of Rents Gets Taxpayer Guarantees