Coming soon to a store near you.

China’s producer prices – which measure what is sometimes called “inflation at the factory” – soared 5.5% in December, from a year ago. This was far hotter than economists had expected, though they’d expected a pretty good jump, with the Bloomberg consensus guess coming in at 4.6%.

In November, producer prices had already jumped 3.3% from a year earlier. There have now been only four months in a row of producer price increases, after they’d been falling in a long bout that began in early 2012. Prices fell as much as -5.9% year-over-year in mid- to late 2015, under the full onslaught of the twin furies, the global commodities bust and overcapacity in China.

This chart by Trading Economics shows the producer price index for the past 10 years. I added the red line; it shows that producer prices jumped the most since September 2011:

This adds to ongoing price pressures at Chinese factories, such as wage increases. They all raise input costs. With margins getting squeezed from the bottom up, producers will be trying to pass on these higher costs to the global supply chains via higher asking prices. And if they get those prices to stick, they’ll export inflation to the rest of the world. And that’ll be a sea change.

By comparison, consumer price inflation looks practically sanguine. The National Bureau of Statistics also released its consumer price index today, which everyone agrees doesn’t account nearly enough for soaring housing costs, among other items, and is not a reliable indicator of increases in the costs of living for consumers in urban areas. Nevertheless, according to this index, consumer prices rose 2.1% from a year ago (chart via Trading Economics): 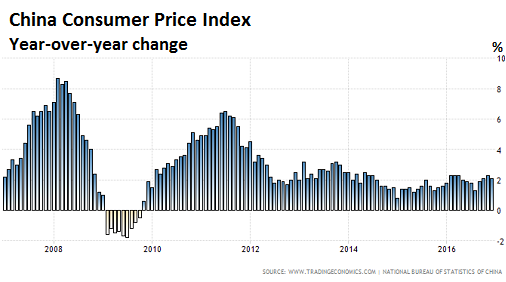 Since 2012, these consumer prices, despite steeply negative producer prices, have increased in the range of +1% to +3% year-over-year!

Food prices, a politically sensitive category, rose 2.4% in December, compared to a year ago; non-food prices 2.0%. Consumer goods prices rose 1.8% while prices of services rose 2.5%. The government is targeting “price stability” – as it’s now called around the world – of about 3% inflation.

Rising consumer prices amount to inflation for internal consumption. However, Chinese producer prices filter into the global inflation picture via price increases by export-oriented producers that want to stay alive and make some money, if they can. And these higher prices are sooner or later headed for the US.

The People’s Bank of China keeps an eye on consumer prices. Surging prices could trigger bouts of social unrest – and have done so in the past. But at the current level of consumer price inflation, authorities are unlikely to get too nervous. And with all the anxieties they already have about the Chinese bond market, the banks, the shadow banks, nonperforming loans, the yuan, capital flight, and so on, inflation is not currently high on their worry list.

So producer prices, particularly of export products, are for now left on their own. The yuan’s weakness against the dollar has absorbed some of the price increases on export products, but it also raises some input costs for Chinese producers, further pressuring them to raise prices. And exporters will try to pass these higher prices on to their partners overseas, as far as possible, who in turn will look to consumers and in the US and elsewhere to foot the bill. Higher prices out of China are a phenomenon the US economy hasn’t seen in years.

The US-Chinese trade relationship has some, let’s say, issues. So now there was a friendly chat among billionaires who presumably see eye-to-eye. Read…  What 1 Million US Jobs? Dreading a Trade War, China Sends Alibaba’s Jack Ma to Trump for some Fence Mending