This is not the way to start your workday… to find this email from your boss in your inbox:

“As we enter 2017, our plan calls for us to reduce our Engineering staff. I realize some of this news is unpleasant. But I wanted to respect your right to know what is occurring this year.”

But that’s what happened on Tuesday at Boeing.

Hammered by slowing aircraft sales and a declining order book, Boeing warned on Tuesday in an internal memo that it would conduct involuntary and voluntary layoffs of engineers in Washington state, southern California, and South Carolina, according to The Seattle Times. The memo did not mention the size of the staff cuts.

The memo by John Hamilton, VP of engineering at Boeing Commercial Airplanes, summed the situation up this way:

“We continue to operate in an environment characterized by fewer sales opportunities and tough competition.”

Of these orders, 550 were for the 737 model. But Boeing only sold 58 Dreamliners, and analysts are speculating that it will need to cut production. And it only sold 17 of its twin-aisle long-range 777, its most profitable plane. In December, Boeing said it would slash production of the 777 by 40%.

Order cancellations in 2016 jumped by 67% to 180 airplanes, another sign that airlines are getting increasingly cautious – and nervous.

Boeing had already given a foretaste of these job cuts on December 19, without going into specifics. It showed that it is slashing jobs faster and more aggressively than forecast in early 2016. The new CEO, Kevin McAllister, who’d succeeded Ray Conner in November, is getting his feet on the ground, so to speak. And Boeing shares hit an all-time high.

But this wave of job cuts communicated on Tuesday isn’t the last one. Production workers will likely get a similar buyout offer on Wednesday, based on what a spokeswoman for the International Association of Machinists union told the Seattle Times.

Hamilton also said that there will be two more waves of job cuts in engineering later this year, the magnitude of which “will be driven by our business environment and the amount of voluntary attrition,” he said.

A Boeing spokesman told the Seattle Times that the company would also “aggressively reduce overall spending in 2017 in non-labor areas.”

In short, orders have plunged 53% in two years, order cancellations have soared, deliveries have dropped, production is getting cut, as wave after wave of layoffs sweep out engineers and productions worker – but no problem. In this wondrous era of ours, stocks can only go up no matter what. Boeing closed up on Tuesday, at $159.07 a share, just a buck shy of its all-time high in December: 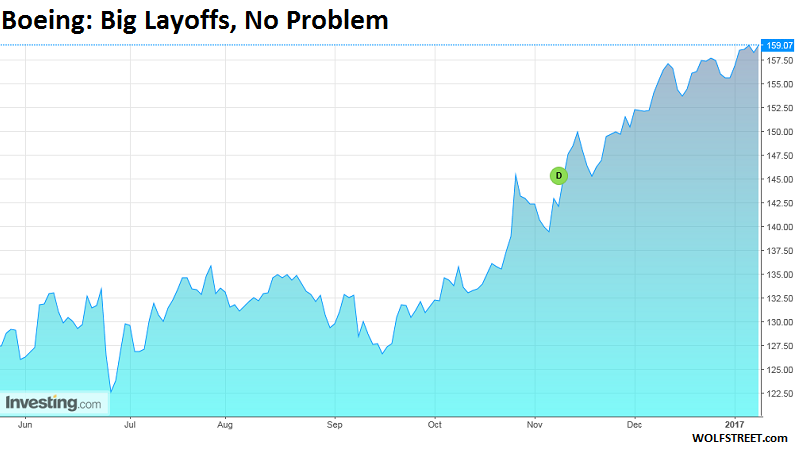 The declining order book – Boeing’s first since the nightmare days of the Financial Crisis – is not just a Boeing phenomenon. The industry is under pressure. Airlines have peeked into the future, and they’re not particularly enthusiastic about what they see in the global economy. They react by slashing or even canceling their aircraft orders. But nothing seems to spook investors these days.

Coming soon to a store near you. Read…  Get Ready for China’s Hot New Export Product: Inflation

43 comments for “Boeing: Three More Waves of Layoffs in 2017, as Orders Collapse to 7-Year Low. Shares Near All-Time High”