A myth gets destroyed by facts.

We’re going to read about the “January Effect” on a daily basis for the next few weeks. It’s the time of the year when the stock market in the US rises because it’s January. It’s a great time to buy, the hypothesis goes. It has been around for decades and resurfaces every January.

It’s based on the idea that there are some powerful seasonal anomalies that cause stocks to rise in January. These are among the most often touted reasons:

The theory is based on the notion that the stock market is inefficient. All calendar-based stock predictions are based on it. And markets are inefficient. They’re manipulated by central banks, governments, and the financial industry in myriad ways. But they don’t care about January.

If the “January Effect” really were so predictable, wouldn’t market participants prepare for it by front-running it and buying ahead of time in order to benefit from it? Alas, if everyone buys ahead of time to realized the gains at the end of January, wouldn’t that eliminate from the outset the effectiveness of the entire “January Effect?”

Yep. It sure would. And it does. Or something does. Because… since 2006, the “January Effect” produced positive results in five Januaries and negative results in six Januaries: 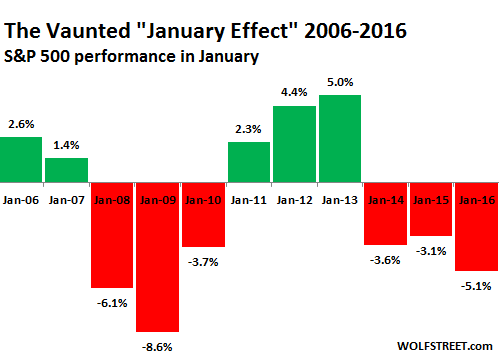 So these past eleven years show that currently the “January Effect” – no matter what it was in the 1960s or 1970s – is more or less a random occurrence and of zero help to investors. It means if you bet on the “January Effect,” you have to be lucky make money.

The “January Effect” has a second meaning, the “January barometer,” a theory that says the performance of the stock market in January reflects its performance for the rest of the year: “As goes January, so goes the year.”

The chart above shows that if this happens, it is also just luck. Over the past 11 years, there were six Januaries when the S&P 500 slid, and in some cases steeply. But in four of those six years, the S&P 500 ended up rallying for the year:

However, of the five Januaries when the S&P 500 was positive, the entire year ended up positive. So can that predictive quality – if January is up, the year will be up – be relied on?

That’s why most of Wall Street always predicts that stocks will always go up. More often than not they do. And so that prediction will be correct much more often than not. And if stocks crash, central banks soon flood the land with cheap credit and QE so that they do go up.

This has worked to the point where the distortions have now reached dizzying levels. So central bank actions, particularly QE, have been far more accurate than the utterly useless “January Effect” in predicting annual stock market returns because they actually attempt via the magnificent power of the printing press to inflate asset prices. But even those efforts have become less accurate predictors recently, as seen in the EU and Japan, where more and more QE and negative-interest-rate absurdities accomplish less and less.

In terms of currencies, 2016 was a mix of deceptive calm, hair-raising craziness, and big surprises. Read…  The Almighty Dollar and the Currencies that Crushed it in 2016