“If you get into a trade war with China, sooner or later we’ll have to come to grips with that,” Carl Icahn, now special advisor to President-Elect Trump, told CNBC on Thursday. “I remember the day something like that would really knock the hell out of the market.”

A trade war with China surely would be another wall of worry for stocks to climb. Trump’s rhetoric against China, each morsel packaged into 140 characters or less, has already recreated much-needed turbulence [read… Trump Tweets about China, US Businesses Freak out].

“But maybe if you’re going to do it,” Icahn said about the looming trade war with China, “you should get it over with, right?”

This comes after rumors emerged that Trump’s transition team is chewing over the idea to impose import tariffs of up to 10%, “according to multiple sources,” including a “senior Trump transition official,” CNN reported. The idea is to boost US manufacturing. The new tariffs could be imposed by executive order or by Congress as part of broader tax reform legislation.

The 10% would be an uptick from the 5% tariff that incoming White House Chief of Staff Reince Priebus had put on the table last week, in “meetings with key Washington players,” two sources “who represent business interests in Washington” told CNN. These tariffs would be in line with Trump’s campaign motto of “America First.”

Other countries would, as they always do, retaliate. Hence the term “trade war.” Countries will be careful not to escalate, but these things can escalate nevertheless, because no one wants to seem weak and back off. Either way, it would pull the rug out from under world trade.

But world trade, a reflection of the health of the global goods-producing economy, is already in bad shape. For the past two years, it has been languishing in a condition we now call the Great Stagnation.

The CPB Netherlands Bureau for Economic Policy Analysis, a division of the Ministry of Economic Affairs, just released the preliminary data of its Merchandise World Trade Monitor for October. World trade isn’t falling off a cliff, as it had done during the Great Recession, when global supply chains froze up overnight. But since November 2014, it has gone absolutely nowhere: 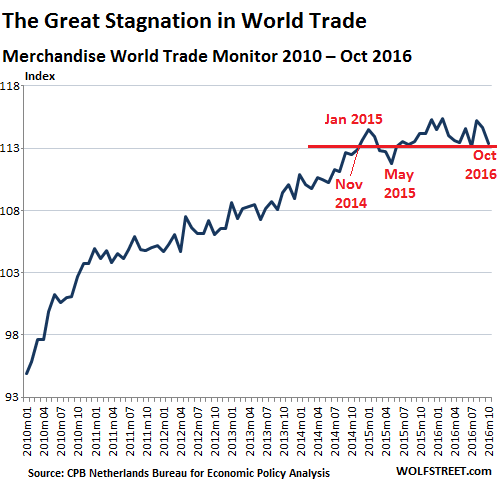 The report put it in perspective:

Regional variation notwithstanding, the overall decline reflected decreasing import and export volumes in both the advanced and emerging country blocks. At the import side, the largest drops occurred in Latin America and the “Other” advanced economies [not the US, Japan, and EU].

Export volume decreased most in Latin America and the United States.

A trade war would come just at the nick of time. With the dollar high and US exports already in decline, retaliation by other countries to Trump’s tariffs would surely be a godsend for the S&P 500 companies: they generate nearly 50% of their revenues overseas. They don’t really need to those sales; they can just focus on the US or whatever. Supply chains are global these days, in all directions, and new tariffs and counter-tariffs would turn them into elaborate anchor chains.

China and other countries might also target American exports of farm products, which would hit farmers, farm lenders, US equipment makers, seed companies, farmland prices, and so on. The possibilities of a trade war, and its ramifications, would be one more topic the relentlessly inflated US stock market would contemplate nervously.

A trade war could also take on financial dimensions, in an already tense world for government bonds. Read…  Foreigners are Dumping US Treasurys as Never Before