Last time the index declined was in November 2009.

“Our Indexes of Coincident Economic Indicators (CEI) for November show economic activity declining for the 3rd straight month in New York State, flattening out in New York City, and remaining essentially flat in New Jersey”: so the New York Fed.

The CEI for New York State fell at an annual rate of 1.9%, following a 1.1% decrease in October, and a 1.0% decrease in September. The index is still up 1.9% over the past 12 months, but is now below where it had been in June and is just above its level in May: 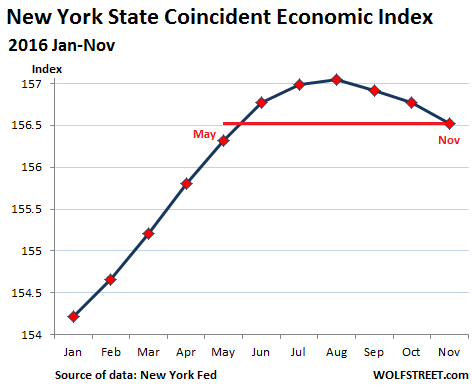 The last time the index declined was in November 2009!

That’s why we’re paying attention to this. These indices, particularly for New York State and New York City, have an uncanny accuracy in moving with the national economy and turning south just before the business cycle for the nation turns south. And shortly after they turn south, a national recession begins.

But official recessions are based on hindsight. The National Bureau of Economic Research, whose job it is to declare official recessions, normally declares them only after they have already ended. The Great Recession was the exception. It lasted so long that the NBER decided that it existed even while it was still going on. That didn’t take a rocket scientist at the time, but that’s how the NBER works.

So we look for red flags beforehand. One monthly dip doesn’t make a trend. But the CEI for New York State declined for the third month in a row. And suddenly we have what might be the beginnings of a trend. And it hasn’t done that since the Great Recession. 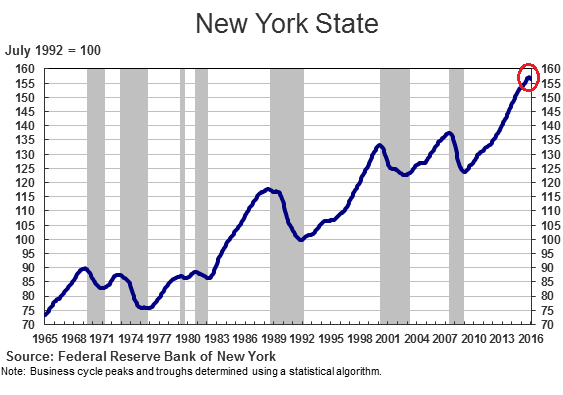 That little dip of the past three months is hard to see on the 50-year chart above. But note how just about all the other little dips became big dips not much later, and how those big dips matched the end of the business cycle and subsequent recession.

The New York Fed’s 20-year chart shows this a little more clearly. Note the 2001/2002 recession and the Great Recession starting at the end of 2007: 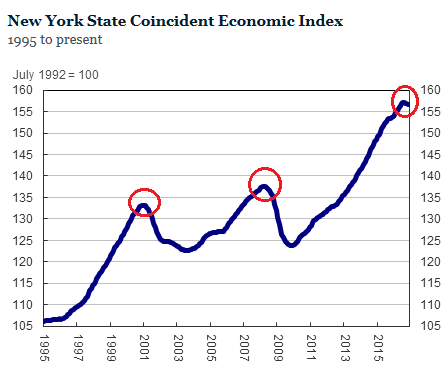 The November CEI for New York City is starting to flatten out – a similar process the CEI for New York State went through over the summer. It edged up at an annual rate of 0.4%, after a 0.7% increase in October. The index is still up 2.5% year-over-year, but the chart shows how it is losing its momentum. The last time growth was this anemic was in October 2009, when it was still negative; by November 2009, the index had already begun to grow at a faster rate: 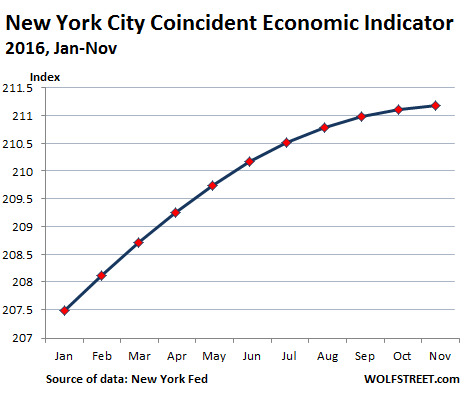 The November CEI for New Jersey edged down 0.02%, following a 0.4% decrease in October. While still up 1.3% year-over-year, the index peaked in August and has now declined for three months in a row. The last time it declined was in January 2011.

These coincident indicators are designed to track “the current state of the economy,” as the New York Fed explains:

The index is computed from a number of data series that move systematically with overall economic conditions. A rise in the index indicates an expansion of economic activity and a decline in the index indicates a contraction in economic activity. Each of the regional indexes is computed using data on employment, real earnings, the unemployment rate, and average weekly hours worked in manufacturing.

So these are serious indices for the New York-New Jersey region that in the past have mirrored the overall US economy. Now they’re heading south again for the first time since the Great Recession.

The move is not in a category where something “plunges” or “collapses” or “careens of the chart,” but it is a big red flag that afterwards might look like something we should have kept our eyes on.