Median asking rents in some of the most expensive markets in the US have started to decline on a year-over-year basis, with landlords throwing incentives into the mix, even where incentives are rare. This has hit the formerly hottest rental markets: San Francisco, New York City, Boston, Washington D.C., Chicago, Miami, and Honolulu.

At the same time, rents are still rising in other cities. In Seattle, the median asking rent jumped 10% in November year-over-year, but even there, cracks are appearing. More on that in a moment.

I’ve been reporting on this spreading phenomenon for months, most recently for November rents, based on rents in multi-family buildings, often owned by institutional investors. These markets are experiencing historic construction booms of apartment and condo towers (many condos end up on the rental market).

But rents of single-family houses are not included in this data. That market tends to be the playground of mom-and-pop investors, though Wall Street and the financialization of rents have also muscled into it. This market is subject to different dynamics and has not experienced the same kind of construction boom. In San Francisco, for example, virtually none of the new construction over the past few years has been single-family.

The report compares the rent of single-family houses in November to the rent of the same houses a year ago. And it also outlines the bifurcation now taking place in the US, with some markets still red-hot, and with other markets, particularly the formerly hottest markets, now turning dreadfully cold.

Here are the hottest 20 of the major markets: 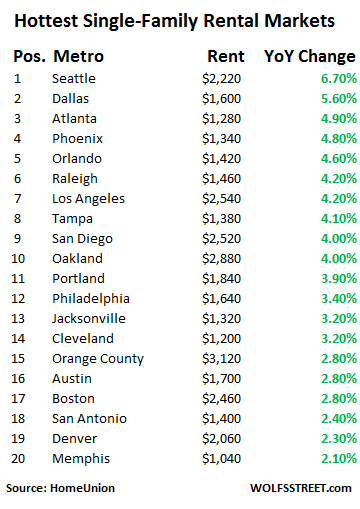 And here are the coldest markets:

Every market has its own dynamics. For example, Oklahoma City and Houston are getting slammed by the oil bust, hence rents of single-family houses fell 4.6% and 2.8% respectively. Miami is suffering from an apartment and condo glut of monumental proportions that is now bleeding into single-family rentals and pushing rents down.

San Francisco and San Jose, the bookends of Silicon Valley, have experienced soaring rents for years. San Francisco has become the most expensive large rental market in the US. At the peak of the craze in October 2015, the median asking rent for a two-bedroom reached $5,000 a month, or $60,000 a year, which might require $80,000 or more in pretax income (depending on how good you are with your tax situation) just to cover rent.

But that was the median asking rent, for median incomes, not for the wealthy. The wealthy don’t like to live in median apartments. Clearly, this math doesn’t work. Since then, asking rents have dropped, for a two-bedroom by 10%. Plus, landlords are throwing incentives, such as one-month free rent, into the deal. Rents are suddenly negotiable. But it’s just the beginning. These things take years to play out.

And despite various assurances, the single family rental market has not been spared: house rents fell 5% year-over-year in San Francisco and 2.6% in San Jose.

A special word is due Seattle. In November, rents in multi-family buildings soared over 10%, making it the hottest large rental market in the US. HomeUnion reported that rents for single-family houses rose 6.7%, so roughly in line with the multi-family surge.

But cracks are appearing. Tom Cain, whose Apartment Insights surveys the five counties in Central and South Puget Sound, wrote in his Q4 report of “a significant deterioration in a rental market that has been booming for the past five years.”

“Fourth quarters are typically slow, but this one is markedly so,” he says. The report focuses on buildings with 50+ units.

Vacancy rates “shot up” to 4.7% in King County, which includes Seattle; and to 4.4% in Snohomish County; from 4.0% in Q3. The overall vacancy rate, including properties in lease-up, for both counties rose to 6.1%.

Average “rental incentives more than doubled,” to $14 a month from $6 a month in Q2 and Q3, with the number of properties offering incentives jumping from 12% to 20%.

Rents dropped by $12 to $1,576 per month. Year-over-year, rents still rose 7.9%, which is in the same ballpark as the 10% increase for multi-family rents in Seattle above. But now the trajectory has bent.

Cain summarizes from the landlord’s point of view: “This quarter’s performance is discouraging. Average rents dropped and the vacancy rate took a big hike.” He adds that “the sudden and significant increase in rental incentives doesn’t bode well either.”

Seattle, the hottest major rental market in the US, might well join the growing list of cities where rents are declining on a year-over-year basis, now including San Francisco, New York City, Boston, Washington D.C., Chicago, Miami, and Honolulu. Under the impact of the Fed’s monetary policies, rent increases have been extraordinarily large, even as renters were struggling with stagnant real household incomes, leading to terms like “Housing Crisis.”

For renters in these markets, especially renters able to negotiate, these dynamics are a welcome shift, though it would come with a lot of pain for property owners and developers that got into the game late – or rather for their creditors and stockholders.

But the housing market overall is facing a new era. Read…  How Will Homebuyers Swallow these Mortgage Rates?