The “death of the dollar” will have to be rescheduled.

Sharply higher yields on Treasury securities and the prospect of more rate hikes by the Fed – in a world where other major central banks are still stewing innocent bystanders in the juices of NIRP, negative yields, and “punishment interest” – sent the hated dollar, whose death has been promised for a long time, soaring.

Pundits are once again declaring that the euro will fall to “parity” with the dollar, as the ECB has been wishing for a long time, though it cannot admit officially that it is trying to crush the euro to give member states an export advantage. That would be “currency manipulation,” which is frowned upon in other countries. But a big wave of “money printing” and forcing yields below zero “to stimulate the economy,” whereby the currency gets crushed as a side effect, is OK.

Tourist destinations and flagship retailers in the US watch out: for your euro tourist customers, things are getting very expensive in the US, and some may choose to buy less or travel to cheaper countries.

By comparison, the Canadian dollar has been relatively well behaved, after the Bank of Canada systematically crushed the bejesus out of it from 2013 through 2015, sending it to a low of C$1.46 to the US dollar in January 2016. But with the partial recovery of the price of oil, and an admission by the BOC that the loonie had dropped enough, it has since zigzagged higher though it too lost nearly 2% since the Fed announcement. But at C$1.34 to the US dollar, it is still nearly 9% higher than it had been at end of the multi-year rout early this year.

And the British pound has dropped 2.5% since the Fed announcement, but at $1.24 currently, the pound is still higher than its end-of-the-world post-Brexit low of $1.18 in early October.

So the dollar index (DXY) shot to 103.5 currently, above 103 for the first time since January 6, 2003. The index measures the movement of the dollar against a basket of these currencies:

This is not an ideal currency basket for the US, given the trade relationships of the US. Most notably, it does not include the Chinese yuan and the Mexican peso, though China and Mexico are among the top trading partners of the US, along with Canada and the Eurozone.

Here is the DXY since yesterday morning. It shows how the dollar jumped instantly upon the Fed’s announcement and has since continued higher (via TradingView): 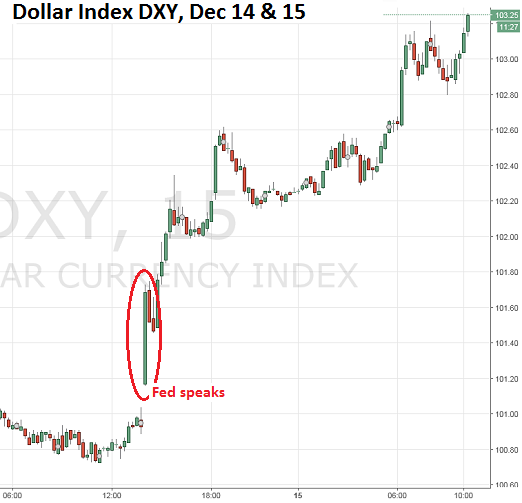 But a longer-term perspective – “longer-term” being half a year these days – shows just how much the dollar has soared, with the moves since the Fed announcement, while big, just adding some extra fuel to the fire: the index has jumped over 11% since June, from 93 to 103.5 now (via TradingView): 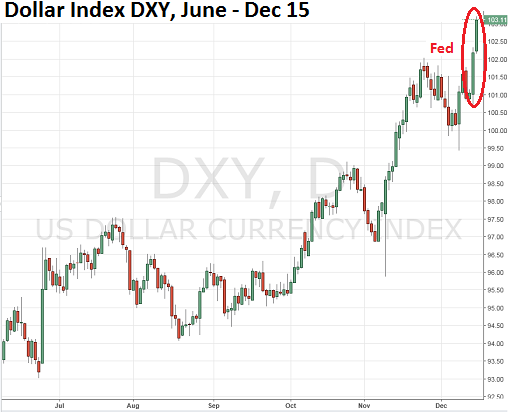 Currency moves like this tend to balance out over time within a trading range, unless … inflation kicks in lopsidedly and eats up the value of just one currency. Then that currency gets crushed permanently, both in terms of its purchasing power at home and against other currencies (see Venezuela). Inflation has once again kicked off in the US. But it’s a slow process. And the “death of the dollar” will have to be rescheduled.

69 comments for “Currency Armageddon? A Word about the Hated Dollar”