No one escapes, not even the Japanese suffering from “deflation.”

This is a principle every consumer has experienced: Official inflation is low, and there is scaremongering by central banks and the media about deflation even. But in reality, when it comes time to buy big-ticket items, prices are much higher than they’d been a few years ago. Everyone who bought new vehicles over the years knows this. It’s called “sticker shock.” But it purposefully doesn’t show up in the inflation numbers.

The situation is particularly blatant in Japan, a country that is supposed to have been in a “deflation spiral” for two decades. So here is the example of the prices of cars. According to a retail price survey conducted by the Ministry of Internal Affairs and Communications, cited by the Nikkei:

The price changes occurred as manufacturers built cars of higher quality and with more gadgets and features, such as heated seats, more elaborate safety devices such as automatic brakes, better batteries for hybrids, and what not.

Here are a few examples, cited by the Nikkei. But this sort of thing is happening in every country, across all brands and models:

Nissan Motor partially remodeled its Note for the first time in four years; the small car was released last month. The Note X goes for ¥1.49 million ($12,921), up 15% from four years ago. The hybrid model is even more expensive, starting at ¥1.77 million.

Subaru maker Fuji Heavy Industries raised the starting price of its new Impreza, released in October, by about 20%, to ¥1.92 million from about ¥1.6 million.

Toyota Motor fully remodeled its Prius at the end of last year, boosting the hybrid’s capacity by adopting lithium-ion batteries and improving its fuel economy by 20%.

Now consider this: Manufacturing has gotten much more efficient over those ten years. Automation has progressed further. Component manufacturing in Japan has been offshored to cheaper countries, such as Thailand, China, and Vietnam, particularly after the March 2011 earthquake and tsunami and the disruptions they caused to the supply chain. And the prices of many commodities have collapsed. All of them combined should have resulted in cheaper cars.

So now the industry and the government lament that auto sales dropped in 2015 from the year before, for the first time in four years, and that sales for the 11 months this year are down another 2.2%. This type of price increase can do that.

But still, all the talk is about how inflation in Japan isn’t big enough, how Japan is still in a deflationary spiral, etc., etc.

So this is the official “deflation spiral”: The Consumer Price Index in October rose to 100.4, up from 99.8 in September. At its peak in October 1998, the index was at 104.5. Since the early 1990s, it has hovered around 100, which is where it is today – hence, official price stability (via Trading Economics): 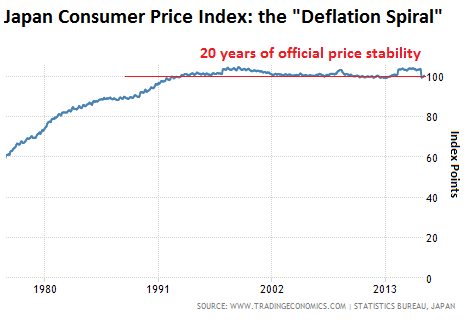 But this chart reflects the official measure of inflation. Numerous price increases that consumer feel painfully don’t make it into the index for logical-sounding statistical reasons. When a product in the basket that makes up the index disappears from the market, it is replaced with a similar product.

So when a new model of a car comes out, and it has better safety items, more gadgets, heated seats, and is of higher quality in other ways, and thus costs more than the prior model, statisticians take that into account. By their definition, this isn’t inflation (currency loses value), but product improvements (product gains value). And so they make adjustments to prevent these often sharp price increases from entering into the inflation index.

Every statistics agency that figures inflation makes these “hedonic adjustments.” They’re estimates, designed to lower the official inflation number. The US Bureau of Labor Statistics makes no secret of it.

For statisticians, it makes sense. But for consumers, things just get more and more expensive, even for Japanese consumers who’ve been told for two decades that they’re suffering from “deflation,” and that the Bank of Japan has to conduct outlandish and risky wealth-redistribution shenanigans to create inflation.

But ultimately, underreporting price increases, and therefore underreporting the rise in the cost of living, is very convenient for over-indebted governments and companies.

Pension payouts and social security payments are pegged to some inflation measure (cost of living adjustments and the like). Bond yields are constantly compared to official inflation. Bond prices fall, and yields rise, when inflation is expected to pick up seriously because investors are leery of getting their pockets cleaned by inflation without proper compensation.

Thanks to our conniving central banks, for savers and many government bond holders, “real interest rates” and “real yields” have long been negative.

That’s a given. It marks the era of financial repression. But blatantly underreporting the actual increases in the cost of living makes this already bad situation much worse. It cheats workers, consumers, retirees, and investors quietly. And that is by design. And if folks don’t like it, they get to eat the explanation about “hedonic adjustments.”

Now whiffs of inflation are wafting through the economy, and traders got even more nervous on Friday, after having been twitchy all Thursday, and they alleviated this condition by dumping government bonds. Read…  Government Bond & Mortgage “Carnage” Enters Sixth Week