“Something unexpected may occur due to imbalances in the market.”

The Miami-Dade County condo market is coming under severe stress, and turmoil is spreading. There are two aspects: supply and sales activity overall, and the more obscure but highly indicative “preconstruction market.”

Preconstruction condos are a favorite playground for condo flippers. They buy the units before construction begins. When the building is completed, some of the buyers (in recent years 30% to 40%) flip their units at a profit, benefiting from the run-up in condo prices in the interim. This activity is crucial in helping developers fund their working capital. Alas, the math has stopped working.

The overall condo and townhouse market in Miami-Dade County is already in trouble. In October, sales plunged 30% year-over-year, while inventory for sale rose to over 14,000 units as of November 1, according to StatFunding’s Preconstruction Condo Market Update.

At the current sales rate, that makes for over 13 months’ supply. The blue bars in the chart from StatFunding represent the swooning sales (in units, left scale). The green line represents the ballooning inventory (in units listed for sale, right scale): 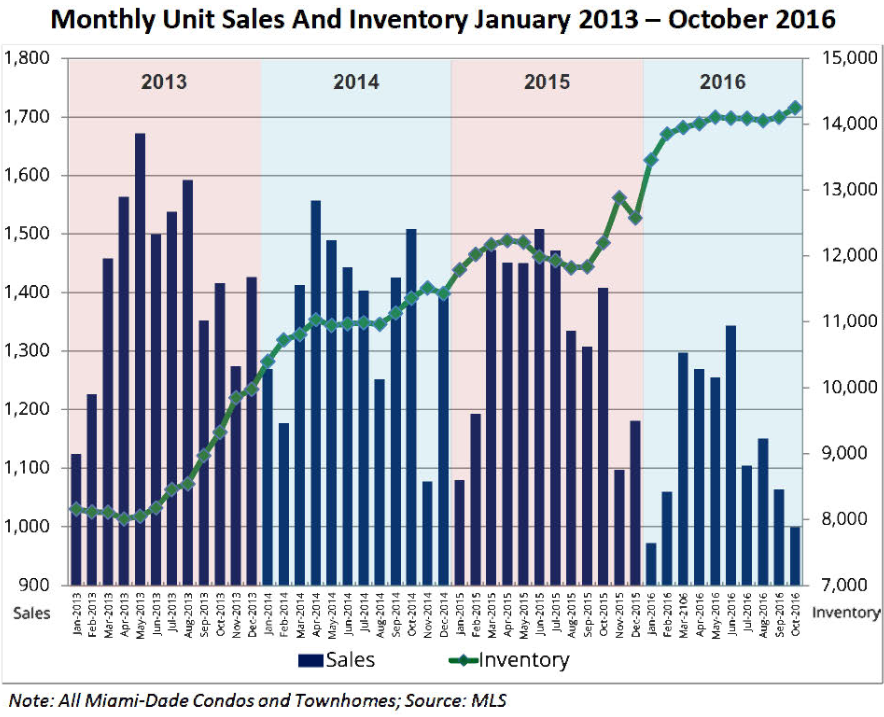 There is some seasonality. So here is another way of looking at these sales on a year-over-year basis (red line = 2016 sales): 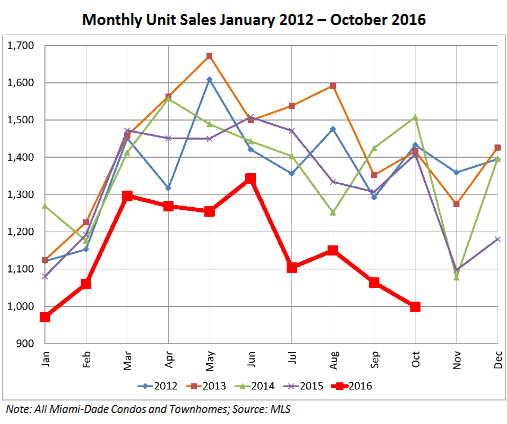 Behind the scenes, it looks a lot worse: the preconstruction market is in the process of unraveling. A total of 4,525 condos were completed between 2012 and 2016 at 20 large projects (80+ units each). Of them, 878 “preconstruction” units are now listed for sale by investors who’d bought from developers before construction began – 19% of the total units in those projects! At the 234-unit Marina Palms North, completed a year ago, 93 units are for sale.

Of those 47 sales, 43% produced net losses after commissions. Now even more flippers are willing to take a loss: 70 units have been listed with underwater asking prices, up from 44 on August 1 and from 14 on May 1. But losses will be higher: 30% of the units that were sold at a loss had asking prices above break-even.

And it will spread from there: These losses are establishing a down-trend in the “comparable sales” data – the Holy Grail by which the industry values properties – which will depress future asking and sales prices further.

Just then, new supply will flood the market. Over the next 24 months, another 10,328 units at large developments are scheduled to be completed.

No one will wait 39 years to sell a condo. Something is going to give. Prices may drop until demand materializes. Sellers may flood the already flooded rental market with these units. Or as Andrew Stearns, Founder and CEO of StatFunding put it, “something unexpected may occur due to imbalances in the market.”

After the prior condo crash during the Financial Crisis, and through to 2015, all developers sold all units. In the past, the moment developers got stuck with unsold condos marked “the inflection point in a condo cycle.” In the Press Release, Stearns said, “It looks like we may be experiencing the same thing all over again.”

But unsold units can be costly for developers. StatFunding:

Some developers have not repaid their construction loans, others have taken out bridge loans. Developers are also responsible for taxes, maintenance fees, and insurance of unsold units. What will developers do to liquidate unsold units?

Market gurus are eagerly proclaiming that this time, the condo cycle is different because preconstruction condos are sold with a “50% deposit.” But this isn’t a 50% deposit. It’s a series of five 10% progress payments due at at the time of reservation, at contract, at groundbreaking, at concrete-pour at the 15th floor, and at Top Off. They typically spread over 24 months.

When a buyer defaults on a progress payment in this market, with little possibility of selling the unit, everyone from the lenders to the developers is bending over backwards to accommodate the nonpayment. Also, alternative lenders have sprung up with loans for the defaulted progress payments. The actual number of defaults is a secret closely guarded by developers (though their lenders know).

Progress payment defaults “are on the rise,” according to Stearns, “and everyone in the preconstruction condo ecosystem is trying to cope with the issue.” These defaults are “a new risk to the market.”

And now the ultimate nightmare has happened for preconstruction condo flippers: The first big condo project in the area has stalled in this condo cycle, “which could be a sign of things to come,” Stearns says.

In September, the developer of the 247-unit H3 Hollywood ran out of funds and halted construction halfway into it. This is in Fort Lauderdale, Broward County, which is adjacent and to the north of Miami-Dade County. While they’re different markets, this incident is a harbinger of what may occur in Miami.

If the developer fails to get funding to finish the project, buyers of preconstruction units are at risk of losing all or almost all of their deposits. Stearns:

“Most preconstruction buyers do not understand that most of their deposit is used as working capital to build the condo project, and that if the project fails, they might lose their deposit.”

Foreclosures suddenly spike most since the last Housing Bust. Read…  What the Heck’s going on with Foreclosures? Why this Spike?

51 comments for “Whiff of Panic in Miami’s Condo Market”