The Government “bond rout” didn’t start with Trump’s election victory. It started in July. And it didn’t just hit US Treasuries. It hit government bonds around the world. It’s predicated on the idea that inflation was raising its ugly head again. That idea has now become further entrenched.

The threat of inflation puts holders of low-yielding or zero-yielding long-term bonds in a very foul mood because the purchasing power of their capital gets destroyed without compensation.

It hit US Treasuries particularly hard. Central banks can push down long-term rates by buying bonds. The ECB and the Bank of Japan are doing that. But the Fed has been flip-flopping about raising rates. There is a good chance it will raise them another notch in December, from nearly nothing, by almost nothing, to next to nothing. So it isn’t going to revolutionize short-term rates. But it does point out that long-term rates in the US are on their own.

Then Trump won. He’d campaigned on a big deficit-funded stimulus program that includes a military buildup and – by golly, much needed – infrastructure work, funded, so to speak, by corporate and individual tax cuts….

Dreading this supply, bond traders went out and cut great-big holes into the most magnificent bond bubble in history, and what we’ve been hearing since this act of Fed-defying vandalism is the deafening sound of hot air hissing out of it.

Today, Veterans Day, the US bond markets are closed, which may be a good thing. It gives them an extra day to take a breath. Because over the last three trading days, the US 10-year yield has skyrocketed 35 basis points, from 1.8% to 2.15%. That’s a huge move (chart via StockCharts.com): 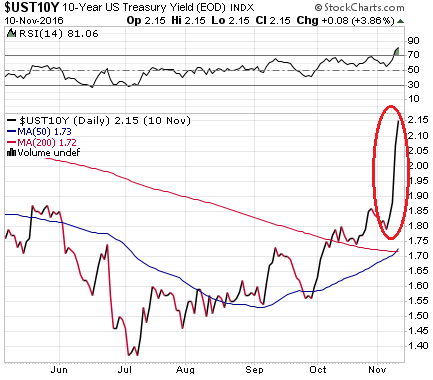 Since early July, the 10-year yield has jumped by 77 basis points. So what does this mean for bondholders, in dollars and cents? Bond prices fall when yields rise. This chart (via StockCharts.com) shows the CBOT Price Index for the 10-year note. It’s down 4.5% since July. 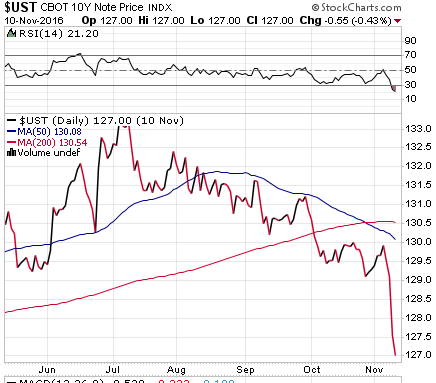 It gets outright ugly with 30-year Treasury bonds. Over the last three trading days, the 30-year yield has soared by 38 basis points and since early July by 83 basis points (via StockCharts.com): 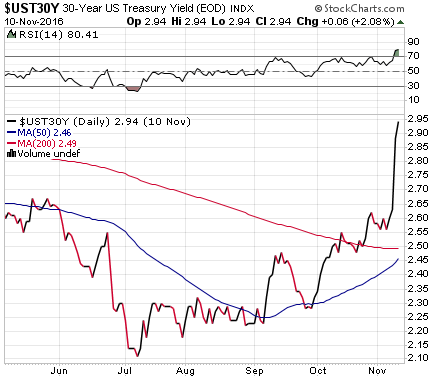 In terms of dollars and cents, the CBOT Price Index for 30-year bonds has plunged 12% since early July! 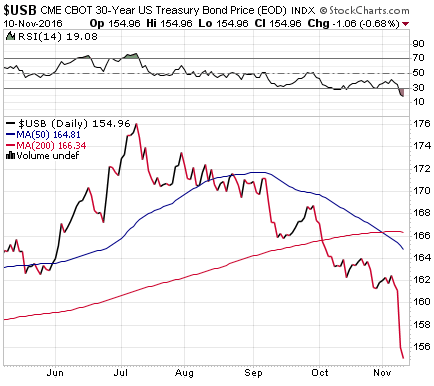 To lose 12% in four months on an investment that yields less than 3% annually, is “risk free” in terms of default, and is considered among the most conservative investments in the world, is a big nut to swallow.

This week, globally, the market value of Bank of America’s Global Broad Market Index, tracking over 24,000 bonds, has plunged by $1.14 trillion to $48.1 trillion, according to Bloomberg. The only prior time it had plunged by over $1 trillion in one week was in June 2013, during the “Taper Tantrum,” when Bernanke suggested QE Infinity might not be for infinity after all.

This has become part of what is now called the “inflation trade.” The logic is that already rising inflation will meet Trump’s fiscal stimulus and additional deficit spending, and that there is no deadlocked Congress to prevent it.

It would come on top of the massive current stimulus and deficit spending, funded over the past 24 months with a net increase in Treasury debt of $1.85 trillion (I look at this in terms of 24 months to eliminate the distorting effects of the debt-ceiling fight in 2015). That’s an increase of indebtedness of on average $925 billion per year. Trump’s plans would push borrowing needs way beyond that.

The theory is that the Fed will see this too. Some Fed heads have already commented that they won’t be in denial on this topic. And once inflation gets more support from this additional stimulus spending, the Fed will raise short-term rates more sharply, which will push long-term yields up further.

Bonds will ultimately be redeemed at face value. That’s the best-case scenario. The worst case scenario is a default. So if bondholders paid over face value, which many of them did, they will face a guaranteed capital loss unless they can sell this thing to an even greater fool for more money.

But that greater-fool trade suddenly seems unlikely. While investors are holding this thing, knowing that at the end there will be a capital loss and that inflation will eat into the purchasing power of that face value, they will also have to endure minuscule coupon payments.

The bond market in the US is far larger than the stock market. And the impact of these losses will be felt far and wide. Unwinding a bond bubble that has ballooned now for over 30 years is a painful and costly process even if it happens in an orderly and gradual fashion and without a tsunami of defaults.

But inflation of this type has been predicted before, and the inflation trade has worked only briefly and sporadically before something happened – the price of oil collapsed, or whatever – and yields dropped again.

Also, the government bond rout has not yet impacted the high-yield market. Junk bonds may be where these folks are fleeing to, after having lost 12% in four months on 30-year US Treasuries. Maybe they’re thinking that junk bonds can’t get much worse than this, and the yields are far higher.

So skepticism abounds. Trump won’t take office till January. It will take a while to get this legislation put together and passed, if it can be done at all, given some lingering resistance in Congress to additional deficit-funded stimulus spending. So it wouldn’t surprise me if yields fall some back next week – on the theory that nothing goes to heck in a straight line.

But the markets can see too that this time, the stars are aligned more in favor of inflation, and in favor of rising long-term rates, and they can see the flood of new government debt. And unless Yellen is buying, they will have to. And they might demand to be paid for the now obvious the risks they’re taking.

This would be a good thing for a lot of people. But the entire asset-bubble economy, the way the Fed has put it together, is based on a super-low cost of capital. A major shift in long-term rates is not going to just pass by the rest of the economy, including the housing market and Corporate America.

There’s already trouble brewing beneath the surface. Foreclosures are suddenly spiking most since the last Housing Bust. Read… What the Heck’s going on with Foreclosures? Why this Spike?

82 comments for “Will the “Rout” in Government Bonds Turn into Carnage?”