Consumer debt rose by $19.3 billion in September to $3.71 trillion, another record in a five-year series of records, the Federal Reserve’s Board of Governors reported on Monday. Consumer debt is up 6% from a year ago, at a time when wages are barely creeping up and when consumer spending rose only 2.4% over the same period.

This follows the elegant principle of borrowing ever more to produce smaller and smaller gains in spending and economic growth. Which is a highly sustainable economic model with enormous future potential, according to the Fed.

Consumer debt – the Fed uses “consumer credit,” which is the same thing but sounds a lot less onerous – includes student loans, auto loans, and revolving credit, such as credit cards and lines of credit. But it does not include mortgages. And that borrowing binge looks like this: 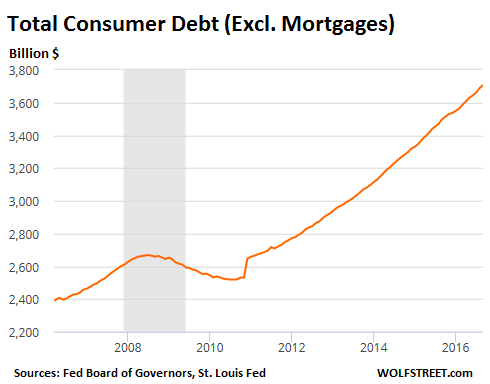 Diving into the components, so to speak: outstanding balances of new and used vehicle loans and leases jumped by $22.6 billion from Q2 to $1.098 trillion, another record in an uninterrupted four-year series of records.

Auto loans have soared 38% from Q3 2012, the time when they regained the glory levels of the Greenspan bubble before the Financial Crisis: 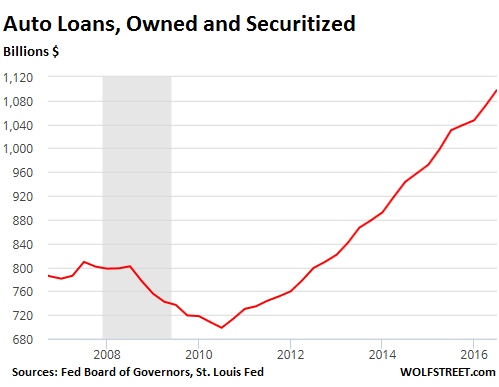 Auto loan balances have soared because people bought more cars. New car sales hit an all-time record last year, though they’ve started to flatten out or decline in recent months. The balances have also been rising because loan terms are getting stretched, and because the balances on individual loans have been getting bigger as cars got more expensive and loan-to-value ratios rose: 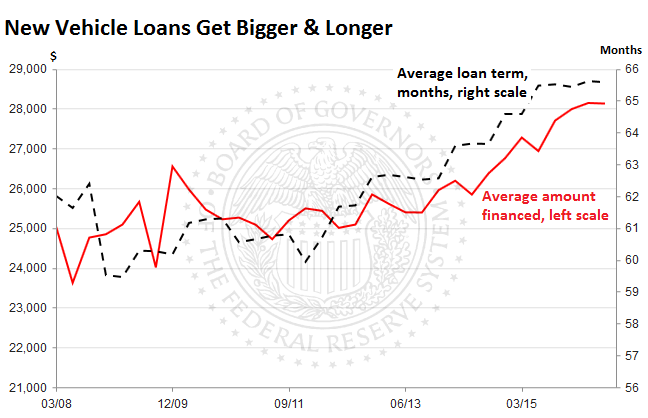 Then to the next-generation debt slaves, many of whom might not even know yet what that term means since they haven’t started to make payments on it.

But student loans owned by the government jumped by $14.2 billion in September alone, and by $37.5 billion in Q3, to a new record of $1.039 trillion. So here’s what’s coming at these hapless debtors: 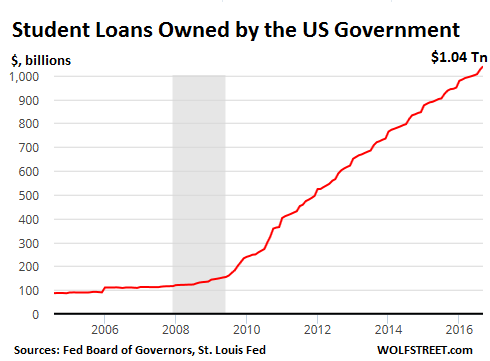 Credit cards are the most expensive way for consumers to go into hock. Interest rates deep into the double digits are not uncommon. There are fees out the wazoo for people who drop the ball. In return, banks borrow from savers at interest rates that are suspiciously close to zero.

Credit card debt is the biggest money maker for banks. If folks don’t pay off their balances, it’s a rip-off. It hits the financially weaker people and those with already some credit problems the worst. And the more urgently they need to borrow (to put food on the table, for example), the more money they’re going to pay in interest and fees. Banks know when they have a consumer by the balls.

But you can’t blame the banks. Banks are not forcing consumers to use these credit cards. During the Financial Crisis, consumers got burned, and they decided to get out of credit-card debt one way or the other, with a lot of this debt defaulting. And that’s when banks got burned.

For a year or two afterwards, consumers were prudent, to the greatest desperation of the Fed. But by 2014, they were forgetting the lessons they’d learned. By 2015, they were back binging on stuff they couldn’t afford. And now credit-card and other revolving debt is once again shooting into the stratosphere, on its way to $1 trillion, though it still has a little ways to go before it hits the prior levels that blew up with such fanfare: 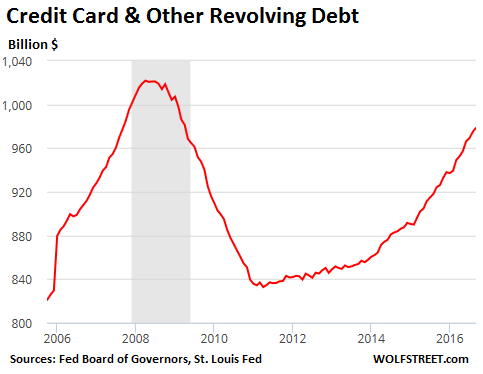 This is the portrait of the American debt slave who is trying to keep the economy hobbling along singlehandedly by buying stuff they cannot afford and may not need, with money they don’t have but need to pay back later when they can afford it even less. But that won’t ever be a problem – until it is.

One of the big expenses for consumers is health care. And there’s a reason for it. Read… How PE Firms Are Flipping Drugs in Price-Gouging Scheme that Cannibalizes the Entire US Economy

109 comments for “This is How Consumers Turn into Debt Slaves”