How the Nuclear Energy Lobby Eats up Global Taxpayer Billions

The well-funded lobbyists of the powerful nuclear energy industry are tirelessly working over governments around the world. Occasionally, there are minor setbacks, such as Fukushima or the current multi-billion-dollar scandal around the decommissioning costs of California’s San Onofre nuclear power plant, that threaten to expose just how horridly expensive nuclear power really is for taxpayers, ratepayers, and other stakeholders, from conception of the plant to final decommissioning and proper disposal of nuclear waste and contaminated materials – none of which has yet been accomplished and paid for.

But here’s the project that was first conceived in 1985, is still far from completion, and has now thrown back the date of first power generation to 2035, if it can ever be accomplished, and there are grave doubts it can.

The hoped-for experimental power generator would be a capacity of a measly 500 megawatts, or about the capacity of 62 top-notch wind turbines, generating electricity in places like West Texas and the Oklahoma Panhandle. A farmer can put up a few of those on his fields for extra income. At an installed cost of about $1.5 million per MW capacity, a utility-scale project of that size might cost $750 million. And the wind is free.

A smallish natural-gas-fired power plant generates that much power and costs even less, but the gas is not free. Bigger plants generate four times as much.

But it’s still considered sort of a research project. So OK. And it has now come up with new cost estimates which, so to speak, exploded. Taxpayers in the US and around the globe are on the hook.

Our hero is the International Thermonuclear Experimental Reactor (ITER), currently being cobbled together in Cadarache in southern France. The backers include taxpayers in the US, Europe, Japan, China, Russia, Korea, and India. In the end, it’s trying to generate electricity from a sun-like nuclear fusion process. This goal has now been moved out to 2035 at the earliest.

The project’s Director-General, Bernard Bigot, told The Nikkei that there will be big delays and that construction costs will exceed the most recent estimate in 2010 by €5 billion ($5.5 billion). This takes the current cost estimate to €20 billion ($22 billion).

Costs snowballed as assembling the reactor with parts contributed by project members proved more challenging than initially thought. As a result, the ITER decided to delay heating of the first plasma until 2025 and achieving full-power fusion until 2035.

Once again, Monsieur Bigot was confident about meeting the newly delayed targets.


But I suspect that a few years from now, cost estimates will once again explode, and at the current rate, they’d hit about €26 billion by 2022, when further big delays will be announced. The chart shows the development of the estimates (dark blue) and what I think the revision will look like in a few years (in red): 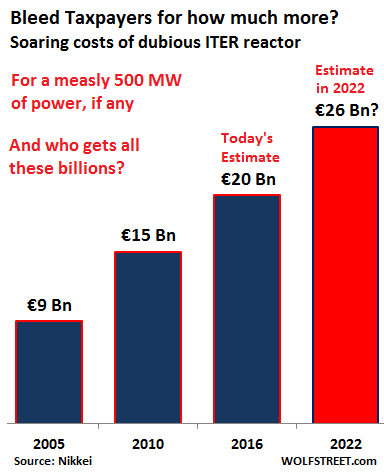 Now remember, this project may never generate any electricity, and if it does, its capacity will max out at the level of 62 of today’s top-notch wind turbines.

One million components, ten million parts … the ITER Tokamak will be the largest and most powerful fusion device in the world. Designed to produce 500 MW of fusion power for 50 MW of input power (a power amplification of 10), it will take its place in history as the first fusion device to create net energy.

Note the phrase: “to create net energy.” That’s the hard part with fusion. Fusion has been accomplished, but so far it takes more energy to get fusion to occur than the fusion itself releases. Hence, net loss of energy. So not a good deal.

The additional costs will be allocated to the taxpayers of the ITER member nations, unless governments put a stop to this money-suck in Southern France.

The Time line of the project:

2005: Cost estimate: €9 billion. Decision to site the project in France

2007: Formal creation of the ITER Organization

2015: The first large components were delivered to the ITER site

For the rest, uncertainty reigns. The ITER Timeline still says that the year when “Deuterium-Tritium Operation begins” is “tbc” – to be confirmed.

Whether this happens or not by 2035, if ever, after many more billions in cost increases, by then probably pushing total costs past $40 billion, hundreds of companies and thousands of investors, engineers, government functionaries, and others will have walked away with one of the biggest taxpayer-funded boondoggle kiddies the nuclear energy lobby has ever been able to conceive.  We still don’t know how they got President Reagan to carry their water at that summit.

In the US, something strange happened with nuclear energy. In 2011, right before the Fukushima meltdown, and even a year afterwards, an unchanged 57% of Americans were in favor of nuclear power. But now, for the first time, the majority of Americans opposes nuclear power. Read…  What Happened to Nuclear Power in the US?