In his keynote speech on the usual suspects of central-bank topics at the Institute of International Finance’s big shindig in Washington DC today, Fed Vice Chair Stanley Fischer nevertheless managed to develop a new theory for a fourth Fed mandate.

This new mandate would come on top of the third mandate: inflating asset bubbles at all costs (unlimited asset price inflation). The other two mandates are “full employment” (whatever that means) and “price stability,” which is ironically defined as consumer price inflation, the way the Fed counts it, of at the moment 2%, and a lot more in most people’s real-life experience.

Fischer has been grumbling about the slow growth of the US economy for a while – “Everybody is trying to find out what is going on,” he said today, and then went on to explain what’s going on. Turns out, what’s restraining economic growth and investment is a lack of “confidence” and “animal spirits.”

“Confidence has to be turned on for people to want to invest and we’re waiting to see that happen,” he said, according to MarketWatch. “It will happen at some point. But precisely when” is unknown he said.

So no interest rate increases until these “animal spirits” and “confidence” show up?

But, but, but… the Fed’s monetary policies for the past eight years have created the biggest credit bubble in US history, including the biggest junk bond bubble ever, a stock market bubble, housing bubbles in numerous cities around the country that exceed by far the peaks of the prior housing bubbles that imploded so spectacularly, the most gigantic commercial real estate bubble, now according to the Green Street Commercial Property Price Index, 26.5% above its totally crazy bubble peak of August 2007….

Some of Fischer’s own colleagues have been loudly fretting about asset bubbles – including Boston Fed governor Eric Rosengren, a voting dove of the Federal Open Markets Committee, where monetary policy is decided, who’d zeroed in on the commercial real estate price bubble: 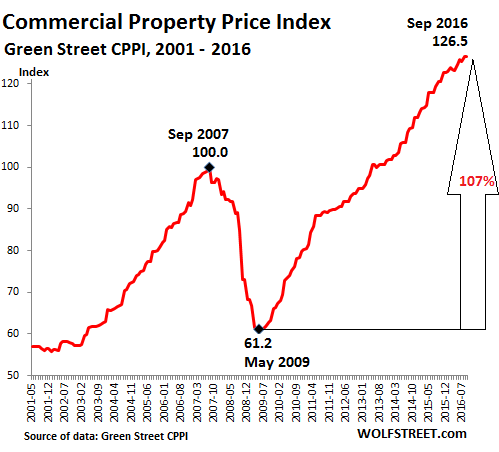 As the chart shows, bubbles get really crazy and then they implode. Bubbles are not great, long term, for the economy overall. They’re only great for their beneficiaries, if they can get out in time. Innocent bystanders suffer when bubbles inflate (for example, life gets more expensive but pay stagnates), and they get unceremoniously plowed under when bubbles blow up while the big beneficiaries that couldn’t get out in time, get bailed out.


The charts for these asset bubbles look just out of this world. Or they would have looked out of this world before the era of QE, ZIRP, and NIRP. Now they basically look normal. Because they just about all look like that.

Animal spirits, pure and simple: Blind risk-taking associated with herd mentality. Everyone is chasing after the same thing, motivated by Fed policies and funded by nearly free money, building up maximum leverage, and driving prices higher and higher in the process. Exactly what the Fed had wanted from get-go. Bernanke called this policy goal the “wealth effect” in a Washington Post editorial back in 2010.

So Fischer is now saying that these “animal spirits” and the “confidence” that blew all these bubbles weren’t quite enough, and the Fed might wait with interest rate hikes until it sees animal spirits and confidence.

In other words, the Fed is always forever waiting for something – whatever it might call it at the time: more jobs, even higher asset prices, whatever pretext, including its fourth mandate, “animal spirits” and “confidence” on top of the craziness already out there.

Thus the Fed (in Fischer’s view) might be Waiting for Godot, as writer Samuel Beckett foresaw with impeccable accuracy in his play written in French 67 years ago, about two characters who wait in vain for the arrival of Godot. The play was part of a movement, called the “Theater of the Absurd,” a most befitting category for the show the Fed has been staging for years.