Orders for Class 8 trucks – the rigs crisscrossing the US highway system that keep the nation supplied – plunged 27% in September to 13,791, according to FTR Transportation Intelligence. It was the worst September since 2009.

The year 2014 had been great. Nearly 300,000 Class 8 trucks were built. 2015 started out even stronger, and the industry anticipated – in what has become a series of false hopes inspired by QE-nurtured optimism about capital expenditures – that 327,000 heavy trucks would be ordered, which would have been a record.

But then the trucking industry began to sputter as the goods producing economy was swooning, and soon trucking companies, beset by overcapacity, began to curtail their purchases from heavy-truck dealers, and dealers with inventories piling up, began to cut orders to manufacturers. As 2015 wore on, orders continued to fall. Despite the strong beginning, orders ended the year down 5.3% from 2014, to 284,000 trucks.

This year has turned out to be outright ugly. So far, manufacturers have received only 130,305 orders, according to FTR, a 39% collapse from the same period in 2015. This chart shows orders for Class 8 trucks in 2015 and 2016 through September: 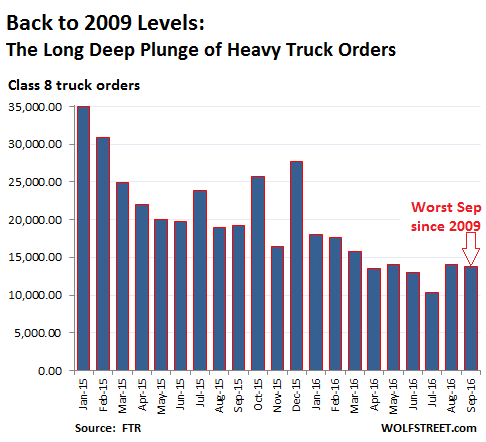 “Large fleets are expected to begin ordering replacement units for 2017,” Ake said. “If the economy does improve and the trucking outlook brightens, then medium-sized fleets and others should feel confident enough to order also in coming months.”

Struggling with plunging orders and under pressure to cut costs, truck manufacturers have been laying off people all year. Volvo Trucks North America has gone through two rounds of layoffs this year, 500 folks in February and another 300 in July.

“[W]e operate in a cyclical market, and we have to adapt to market demand,” spokesman John Mies wrote in an email in July to The Roanoke Times, Roanoke, VA, not far from Pulaski County, where the Volvo plant is located. Layoffs always hit surrounding communities the hardest.

Freightliner, a unit of Daimler Trucks North America, announced nearly 1,000 layoffs in January and another 1,250 layoffs in February, blaming “a sustained reduction in orders.” Then in June, it added another round of layoffs, this time 800 workers.

Navistar cut 10% of its workforce, or 1,400 people, in late 2015. Paccar, which produces Kenworth and Peterbilt trucks, also announced layoffs at some of its plants, along with suppliers of truck manufacturers, including diesel engine maker Cummins.

Heavy trucks play a crucial role in the US economy. In 2015, they transported 64.3% by value of total freight, with the other modes being rail, pipeline, air, and vessel. The trucking business, even more so than railroads, is an important thermometer for the goods producing economy. And that’s where part of the problem lies.