The median income for men is below 1974 levels.

We’ll be hearing and reading about this for a long time, in all kinds of iterations: “Americans last year reaped the largest economic gains in nearly a generation,” the New York Times gushed. “Household incomes surged 5.2% in 2015, first gain since 2007,” the Wall Street Journal raved. Everyone was happy. Poverty rates dropped 1.2 percentage points. Finally, some good data in that beleaguered sector! The middle class and those below had been getting hammered for too long.

The impetus of these happy moments in the US economy is the Census Bureau’s Income and Poverty survey for 2015. It reported that median household income – 50% of households earn more, 50% earn less – rose 5.2% to $56,516, adjusted for inflation via the Consumer Price Index.

Nevertheless, it was welcome news, after years of dreary data points on this topic – though it left me scratching my head. Something didn’t quite add up, given other data we have on wage increases, which have remained a dreary topic. Then I checked with Lee Adler at The Wall Street Examiner, and he sent me back to the drawing board.

The 70-page report was based on survey data on a sample of 95,000 addresses across the US. The sample is very large for a survey, which makes the results more reliable and allows plenty of room to drill down into the details, and split the numbers by age, race, gender, and so on, and still have a sufficiently large sample size in each group.

And then there were the crucial data points that explained the bout of head-scratching earlier. People are not suddenly getting big-fat paychecks:

Check it out. The chart is interactive. Hover over the lines to get the data points for each year: 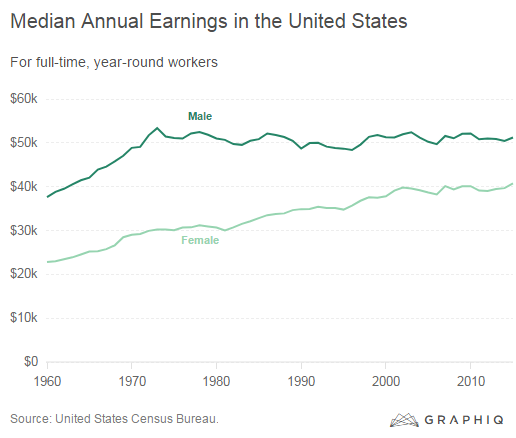 
So with men’s median income inching up only 1.5% and women’s income 2.7% in 2015, how could household income have jumped 5.2%? Something else must have been at play. Here are some thoughts.

1. Quirks in the data either for 2014 and/or 2015. Quirks in statistical data aren’t that unheard of, even in large surveys.

3. Then there are the millennials. They’re now entering the workforce in large numbers. Some of the live-at-home millennials have found a job finally, or a better job, and that benefits household incomes. Other millennials, upon graduating from college with a good job, moved back in with mom and dad because housing is too expensive. And that would benefit household incomes.

4. “Household income” isn’t just what the amount that income earners in that household bring home from their jobs. The survey also asks questions about the amount of “money income” each person 15 years and older in the household has received from these 18 sources, which include income from government benefits from investments:

The Census report sheds no light on how much of role each of these 18 sources of income played in the household total, and how much other factors were involved. We know that dividend payments have surged, and so has dividend income. Rents have surged too, and so has rental income. “Educational assistance” might include student loans, which have soared also. The possibilities are endless.

All we know is that the median income from wages has ticked up at a frustratingly slow rate: 1.5% for men and 2.7% for women. And that is no reason to celebrate.

And now CEOs have the “unfortunate new normal.” Read…  The Chilling Thing CEOs of Corporate America Said about Jobs