We’re investing in some truly interesting times. Check out the index below from Credit Suisse depicting contagion risk across global markets and asset classes. It’s now showing the highest global correlation since the index was created: 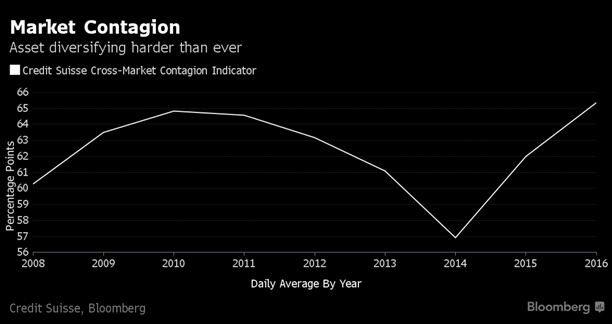 It’s interesting because normally correlations rise during a bear market. But right now we’re hitting record highs while many global markets are still in an old cyclical bull.

These high linkages are why, on Friday’s sell-off, there was hardly a drop of green in any market around the world.

This type of cross asset contagion is concerning, but not at all surprising. It’s the direct result of central banks tickling investors into a yield frenzy, with little to no regard for credit quality or any other risk factor. This has resulted in an increasing amount of capital crowding into already extended assets.

And the correlations are further exacerbated by the prominence of quant driven funds whose algos are all positioning (making buying and selling decisions) off the same metrics.

There’s a great post on the systemic risks created by quant funds from Global Slant. Here’s an excerpt below and you can find the whole article here (emphasis mine):

While in Greenwich Ct. one afternoon I will never forget a conversation I had with a leading quantitative portfolio manager. He said to me that despite its obvious attributes, “Black Box” trading was very tricky. The algorithms may work for a while [even a very long while] and then, inexplicably, they’ll just completely “BLOW UP.”

To him, the most important component to quantitative trading was not the creation of a good model. To him, amazingly, that was a challenge but not especially difficult. The real challenge, for him, was to “sniff out” the degrading model prior to its inevitable “BLOW-UP.” And I quote his humble, resolute observation “because, you know, eventually they ALL blow-up“…as most did in August 2007…

…I asked, “Why do they all ‘BLOW UP?’ What are those common traits that seem to effect just about every quantitative model despite the intellectual and capital fire-power behind them? And if they all eventually ‘BLOW UP,’ then why are we even doing this?”

He answered the second part of the question first…and I paraphrase…“We are all doing this because we can make a lot of money BEFORE they ‘BLOW UP.’ And after they do “BLOW UP,” nobody can take the money back from us.”

He then informed me why all these models actually “BLOW UP.” “Because despite what we all want to believe about our own intellectual unique-ness, at its core, we are all doing the same thing. And when that occurs, a lot of trades get too crowded…and when we all want to liquidate [these similar trades] at the same time…that’s when it gets very ugly.“ I was so naive. He was so right.

This is a problem. “We are all doing the same thing” leads to crowded trades. And crowded trades don’t tend to work out because “when we all want to liquidate… at the same time” things get ugly. If Friday is any indicator, we should expect a buffet of ugly, or as Hillary would say, a “basket of deplorables,” sometime in the near future.

The main reason for all this volatility we’ve been seeing in the markets lately is rates. Specifically, the Fed’s drive to put the rate hike narrative back on the table, and also disappointment over recent ECB and BOJ action — or I should say inaction.

The 10-year yields of both the Japanese and German debt have been rising. Germany is now positive again and Japan is a hair below zero.

These recent spikes in yield are driven by three things:

Because of the crazy things that happen with bond math when at zirp and nirp, the “fools” who bought into Japanese and European negative coupon bonds too late in the game have taken large losses over the last couple of weeks.

These losses, combined with rising rates, are no doubt causing repositioning within portfolios that should continue to affect equities.

The Fed meanwhile has been on a coordinated media blitz, trying to get the market to buy into the potential for a rate hike before the end of the year. Many attributed Friday’s selloff to Fed President Eric Rosengren’s hawkish speech on Friday, where he warned that a “reasonable case” can be made for a rate hike to keep the economy from “overheating.”

But the data tells a different story. The latest ISM print was horrible and nominal GDP and inflation are well below where the Fed wants them.

Yet these central bankers are still trying to temper risk enthusiasm in the markets. They now find themselves stuck with a slowly deteriorating economy that can’t stomach a rate hike and an increasingly speculative market that needs higher rates to cool its jets.

Which concern pushes the scale for them?

My personal opinion is that the Fed is jawboning about raising rates because they know that they can’t. The FOMC doesn’t have a lot of confidence in the economy’s strength and they don’t want to stir up unnecessary trouble in an already contentious election year.

Expect the recent increased market volatility to continue into the Fed meeting next week. We’ll be trading light to protect our capital until then. By Alex M., Macro Ops.