By Bill Bergman, Director of Research, Truth in Accounting, Chicago:

In recent weeks, Chicago municipal bond prices have firmed up a bit. And today, wire services are reporting stories along the lines that signs of progress in pension funding have stabilized the outlook for the city’s credit ratings.

Does this mean that things are heading in the right direction? Not necessarily.

If the financial crisis of 2007-2009 taught us anything, it taught us to be careful of taking market prices at face value. Let alone credit rating agency opinions.

But let’s give the market and the rating agencies the benefit of the doubt, for a moment. What else might these recent developments imply?

A better outlook for pension funding doesn’t appear out of nowhere. More money flowing into pensions, and supporting promises to bondholders, is coming from somewhere else.

Is this somewhere taxpayers, and people paying fees to the city of Chicago? How durable will recent developments prove to be? Will they survive the response of taxpayers sensing a greater slice of their flesh being stripped off their bones?

This helps illustrate why we prefer a more holistic view of government finances, at Truth in Accounting. We study pensions in detail, but do not restrict our analysis to “pension funding.” We use that information to develop an overall measure of state and local government fiscal strength.

Myopic focus on pension funding and/or bond credit ratings risks prioritizing those interested parties above the interests of the Average Joe and Jane – taxpayers and citizens.

Take a peek at the disturbing charts below. Rapidly rising interest payments aren’t going to students looking for a way to get to school, or to communities trying to improve safety. In many ways, they are paying for sins of the past.

The City of Chicago recently reported an alarming 50% increase in interest expense from 2014 to 2015. Last year, the city spent over $860 million in interest, before spending a dime on any public services.

Here’s a look at what Chicago has reported for interest expense on long-term debt since 2006. Note that interest rates have been declining dramatically over this period: 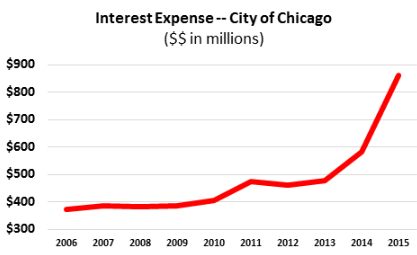 How does Chicago stack up against other cities, on this score? This chart shows the percentage change in interest expense over the last 10 years for the 10 largest cities in the nation: 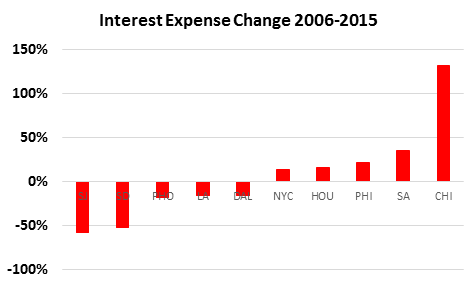 There are times when organizations may find it beneficial to borrow significant amounts of money, given their growth opportunities. This does not appear to be one of them. Chicago has been spending more money than it has been taking in for a number of years, despite claiming to “balance its budget as required by state law.” By Bill Bergman, Director of Research, Truth in Accounting.

24 comments for “Sinkhole City Chicago: Taxpayers Sensing Greater Slice of Flesh Being Stripped off their Bones?”