“Everything feels distorted and unnatural”: Citigroup

And trading volume has fallen asleep – much more so than during the normal summer lull. Even the algos appear to have been turned off for maintenance. Jared Woodard, a strategist at BofA Merrill Lynch, summarized it this way:

“Last week and the week before, you had to make sure your machine was actually on because it was flashing so infrequently.”

And no one is worried about anything.

The Chicago Board Options Exchange SPX Volatility Index (VIX) – the vaunted “fear index” – spent much of the past two weeks below 12, only a smidgen above the record low of July 2014.

In other words, nothing moves. But something has been moving: Earnings. The wrong way.

All-out financial engineering, record share buybacks, questionable accounting methods, such as those used by Valeant, and other tricks and devices [“The bezzle shrinks”: LendingClub, Theranos, Breitling Energy], have just one purpose: Drive up earnings, or at least “adjusted” ex-bad-items earnings per share that Wall Street likes to proffer, and that investors gobble up, eyes tightly closed, in a form of Consensual Hallucination.

But even those expertly doctored “adjusted” earnings per share of the S&P 500 companies have declined (on a trailing 12 months basis), according to FactSet, since their peak in November 2014 – for nearly two years, even as stocks have chased after new highs (red marks and text added): 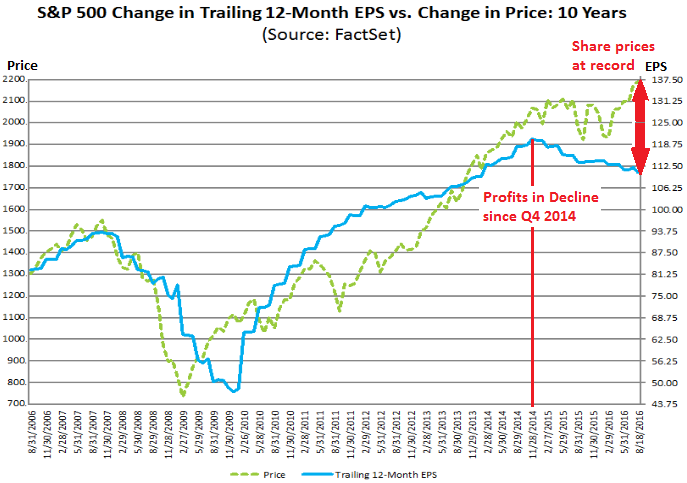 Note the open-jaws syndrome between falling doctored “adjusted” earnings per share and rising stock prices. These two normally correlate. But no longer. They’ve been going into opposite directions for two years.

And earnings aren’t about to turn around. According to FactSet, “adjusted” earnings per share for the S&P 500 declined 3.2% in the second quarter. For the third quarter, the consensus forecast – so the optimistic case – is a decline of another 2%.


Analysts adjust their forecasts down as the quarter progresses so that companies have a chance to exceed these lowered expectations. A month from now, analysts will likely forecast an even larger decline in earnings. And they’re already forecasting an earnings decline for the entire year.

Of late, the market value of US common stock is setting new record highs, notwithstanding the likelihood of a second straight annual decline by 2016’s broadest measure of pretax operating profits. As derived from the Blue Chip consensus forecast of early August 2016, profits will not at least match 2014’s apex until 2018 on a calendar-year basis.

So the Blue Chip optimist soothsayers think that earnings might not go back to the level of two years ago until 2018. And even as they’re saying this, earnings are still heading south.

Yet stocks are hovering at all-time highs, on very thin volume, and no one sees any risks to speak of, and earnings – even those beautifully doctored and “adjusted” earnings – for sure don’t matter anymore.

What underlies this paradisiacal faux reality?

Lousy economic data in an economy ruined by free money and hobbled by asset price inflation out the wazoo, where companies no longer have to show profits or profit growth or revenue growth, or anything at all, other than share buybacks interspersed with some delicious mergers & acquisitions and a good dose of layoffs….

Matt King, head of credit strategy at Citigroup, explains is this way to The Journal:

“Everything feels distorted and unnatural, you know the source of that is the central banks but equally there’s nothing to stop them carrying on.”

Some fearless central-bank non-believers, with one eye on the above chart, might call it “the mother of all shorts.” And many have gone done in flames.

For Wall Street and for investors listening to Wall Street, it has now been firmly established that central banks will always bail them out. No matter what. And no matter what the cost to the real economy. At first there was the “Greenspan put” (a put option is a form of protection against dropping prices). The Greenspan put led to the Financial Crisis, when stocks crashed in a dizzying manner.

This gave rise to the ferocious scorched-earth Bernanke put that included QE and zero-interest-rate policies. Since then, every time stocks or bonds more than squiggled, central banks – and not just the Fed – stepped in to rectify the situation with policies that have become ever crazier. This has taught investors a lesson:

Nothing matters anymore, nothing but central banks.

Now there’s the Yellen put. So far, she hasn’t disappointed. Occasionally, she mumbles something about valuations being “stretched” and warns about the “reach for yield,” but these words are just decoration around the edges of her put.

And now markets are more precarious than ever, with silly valuations and a historic debt overhang, the very result of all these central bank puts. Liquidity is thin. And markets tend to go haywire and apply maximum pain when investors, perhaps lulled to sleep by all these puts, least expect it. And here’s the thing: stocks crashed twice since 2000, despite the Fed’s puts. Why? Because reality suddenly got on top of them.

In terms of the real economy, here’s the other side of that coin. And the year isn’t even over yet. Read…  The Biggest American Layoff Queens in 2016 “So Far”

59 comments for ““Mother of all Shorts” when Stocks Cave to Reality?”