I get chills when insiders tell outsiders “not to panic.”

Home sales plunged 10.9% across the US in July from a year ago, “the biggest national sales decline since April 2011,” nationwide real estate broker Redfin reported, adding chillingly, “but there’s a good reason not to panic.”

When insiders tell outsiders “not to panic,” I get worried. This is what July home sales volume in the US looked like, according to Redfin: 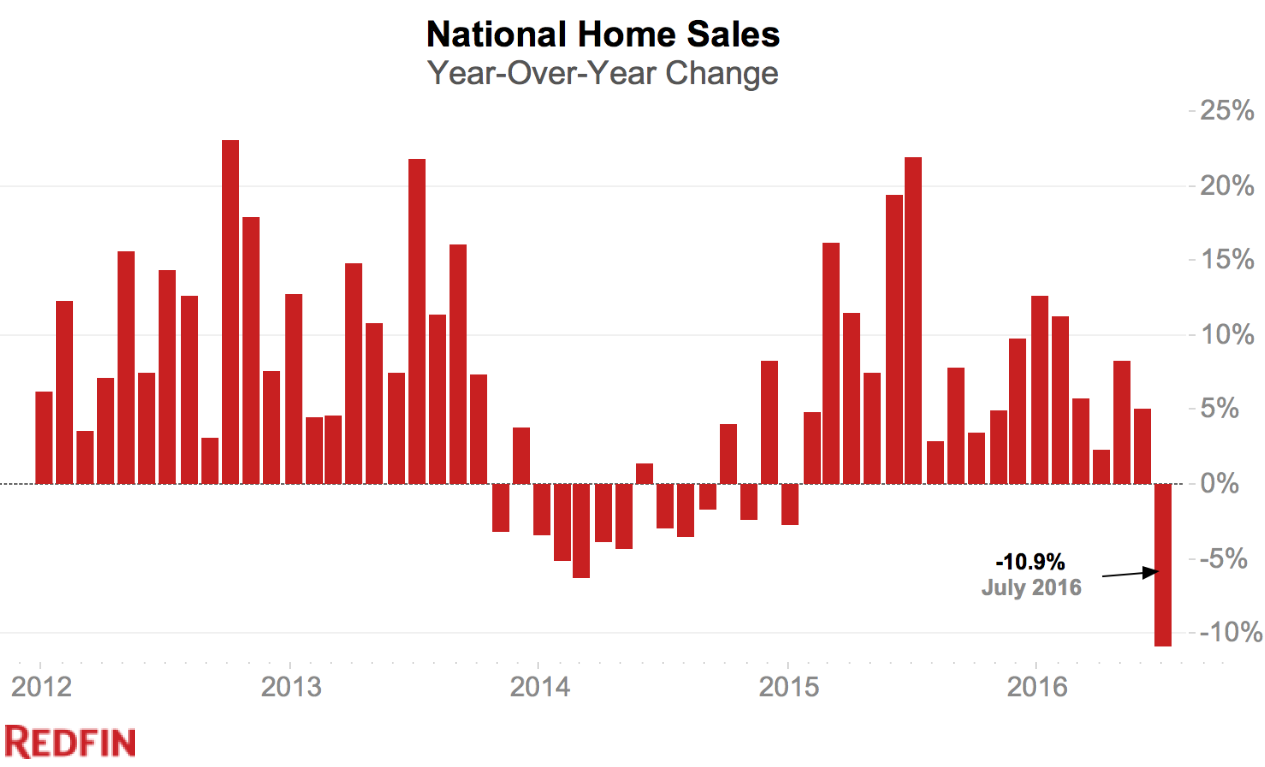 Yet, the median home price across the US rose 5.3% from July a year ago. OK, as long as prices rise, everything is fine.

But when buyers refuse to pay inflated prices and sellers refuse to lower their prices, then volume dries up until something gives. If sellers run out of patience or are forced to sell, prices suddenly take a hit. On a nationwide average, that’s not happening yet, though it has started to happen in some cities.

All homes for sale (the “inventory”) fell 6.6% from a year ago. More on that in a moment, in the discussion about San Francisco – because there’s something important missing here.

Given the plunge in sales, supply as measured in months at the current sales rate edged up 0.1 points to 3.2 months.

But don’t panic, the report said. Part of the sales plunge was due to the calendar. The number of selling days can impact monthly sales by a lot. This is true in auto sales and in a number other categories. So Redfin did its own calculus:

Because the month started on a Friday, there were five full weekends plus one national holiday, leaving only 20 days available for home closings.

Redfin data shows that the lion’s share of closings happen on Fridays. Homes very rarely close on Saturdays or Sundays. This July contained a below-average number of business days (2.3% lower than average) while July 2015 had the most favorable day-of-week setup for closings of any month on record (5.3% higher than average).

“All else equal, we’d expect the number of homes sold throughout the U.S. to be 7.5% lower in July 2016 than it was in July 2015, simply because of the way the days laid out on the calendar.”

That leaves the remaining 3.4% drop in sales unexplained by the calendar. So Redfin found other reasons that dented sales:

Election anxiety, stock market queasiness, and general economic malaise combined with the lack of available homes on the market to drive sales lower as well.

“Stock market queasiness” is particularly intriguing because stocks in the US kept bounding to all-time highs in July. If anyone should get queasy, it’s from being perched on top of these dizzying valuations, even as corporate sales and profits have been declining since 2014.

And there’s more to it. The report cites Luis Vasquez, a Redfin broker in Chicago:

“Recently, I’ve been getting calls from listing agents asking if my clients are still interested in homes they saw several days or weeks ago, letting me know they’ve dropped the price. It’s been about two years since I’ve gotten those kinds of calls.

“There’s a sense of anxiety among both buyers and sellers, which I think can be attributed to the uncertainty around the upcoming election and to the perceived health of the economy. Some buyers are concerned that home prices are topping out and don’t want to get caught in a market that’s getting ready to tumble back down.” 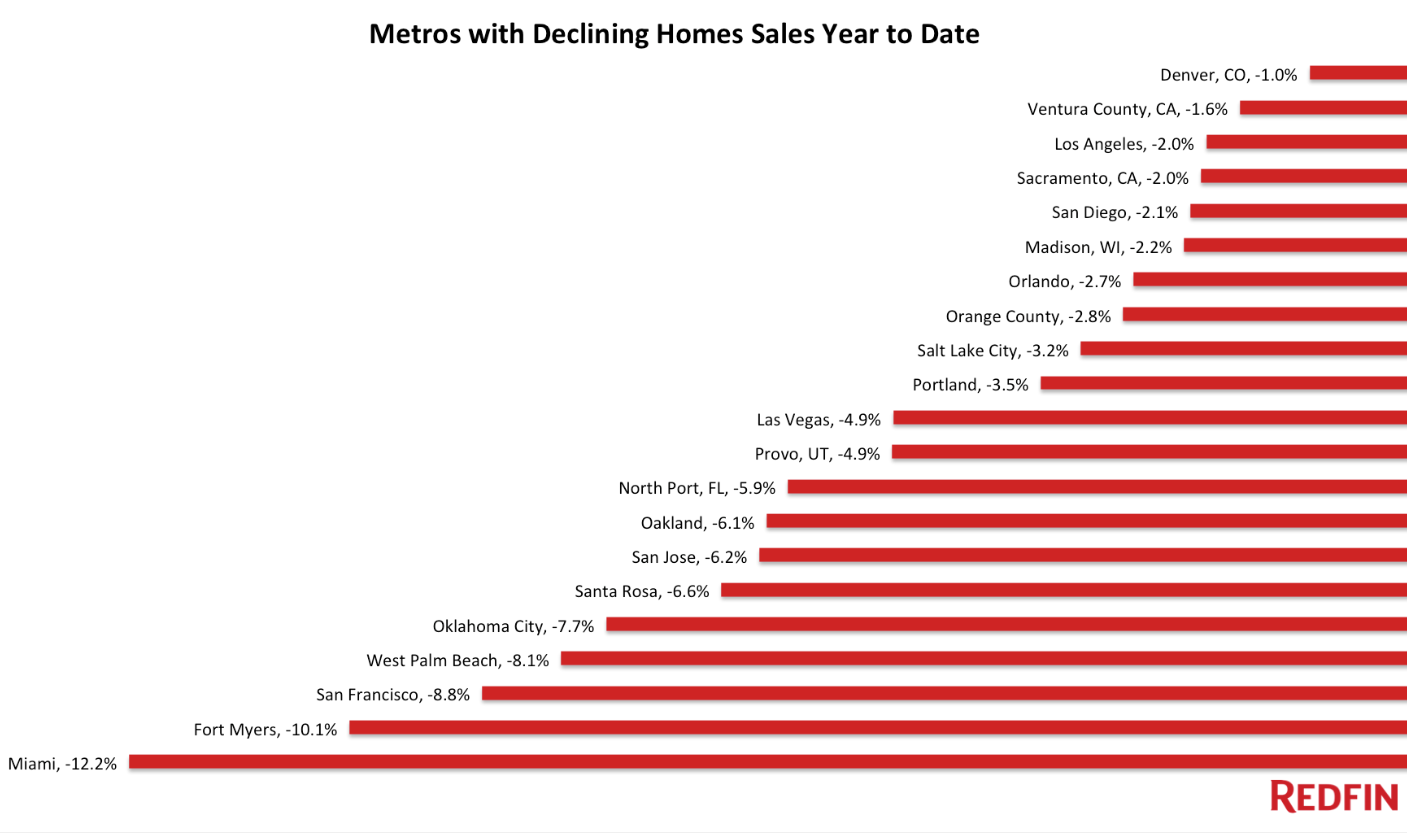 The above chart depicts the first seven months of the year, compared to the same period last year. But in July, compared to July last year, sales in Las Vegas, NV, plummeted 46%, even as prices jumped 7.5%. In Allentown, PA, sales plunged 32%, and in Pittsburgh, PA, 30%. Only a fraction is due to the 3 fewer selling days. The rest is due to market conditions.

Real estate is local – until enough markets hit the skids. Then it’s no longer local.

Home price changes are apparently the hardest thing to measure. A number of entities attempt it, each with its own methodologies, tricks, and devices, among them: the Census Bureau, the S&P/Case-Shiller, the National Association of Realtors, CoreLogic, local and state indices based on Multiple Listing Service (MLS) data, or brokers like Redfin that rely on data from their own brokers. They never agree on the median price and the magnitude of the price changes. But eventually, they tend to agree on the direction.

So in San Francisco, one of the formerly hottest housing markets in the US, home sales in July plunged 13.6% from July last year. And according to Redfin, the median price, after soaring in the double digits for four years in a row, inched up “less than” 0.5% to $1.2 million: 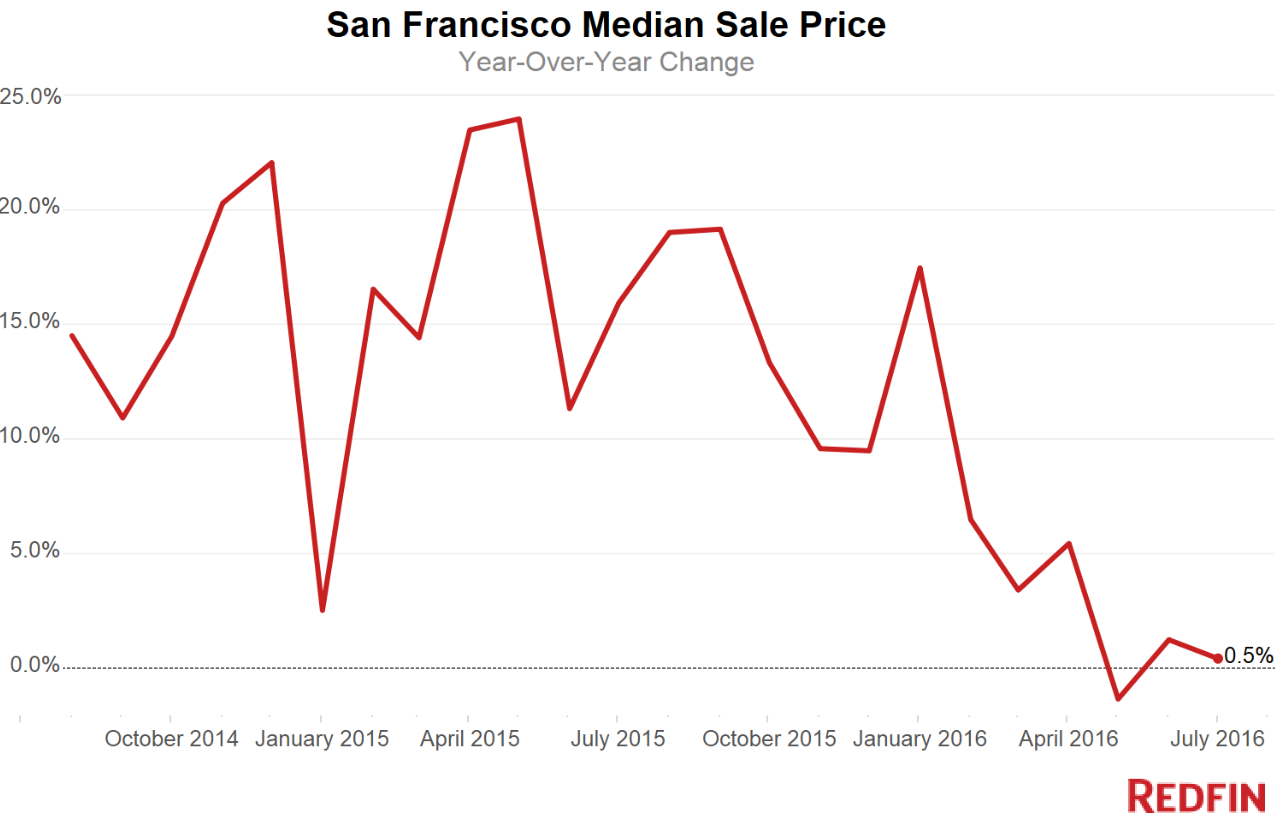 CoreLogic, in reporting on the nine-county San Francisco Bay Area, also noted a 13.5% plunge in home sales in July, but was somewhat less benign about prices: across the Bay Area, the median price dropped 6.3% from July last year.

This comes as homes for sale in San Francisco have shot up to more than a two-months supply, according to Redfin, “a rarity in a city known for its tight housing inventory.” Inventory has been rising every month since December, with single-family inventory now up 39% from a year ago, while condo inventory “has nearly doubled.”

Thousands of new condos are being completed every year in a historic construction boom. These units started hitting the market two years ago and will continue to do so for years to come.

But here’s the problem with the condo inventory: the numerous condo towers being completed have their own sales offices. Their units are not listed in the MLS. Redfin doesn’t get to sell them. So they don’t show up in Redfin’s data, or anyone else’s data. They only show up once the new owner tries to resell the unit.

This massive supply of new condos is murky, on purpose. No one needs to know if they’re hundreds or perhaps thousands of units either on the market or soon to be on the market. But that inventory is real. And trying to keep it in the shadow is part of the game.

In that respect, Miami is ahead of San Francisco. It too has a phenomenal condo construction boom, but condo resales are plunging, inventory is soaring, and developers are just “sitting” on their units, in a market that “could get scary.” Read…  The Pooh-Poohed Doom-and-Gloom Scenario for Miami’s Condo Bubble and its Lenders Has Arrived