The gloomy scenario the “smart money” is betting on.

If 2.11% sounds like a miserably low return for tying up your money for three decades of hell and high water, it’s practically bond nirvana for whatever else is out there.

The German government, paragon of fiscal rectitude at the moment, one of the few AAA-rated governments left on earth, is able to charge investors for lending it money: the 10-year yield ended the week at a negative -0.187%; the 30-year yield is still positive at 0.35%, but creeping closer to zero.

In Japan, it’s even worse. Fiscally, Japan is the opposite of Germany. It has a lowly A+ credit rating, a gross national debt that has ballooned to 250% of GDP, by far the worst in the developed world, and mega-deficits year after year. Yet its lost-cause debt sports a 10-year yield of negative -0.288%. Even the 30-year bond is dabbling with zero.

At the end of May, the total amount of government debt with negative yields had reached $10.4 trillion. By June 27, it had jumped to $11.7 trillion, according to Fitch Ratings. Since then, even more debt has skidded into negative-yield absurdity, now exceeding $12 trillion, and moving inexorably higher. 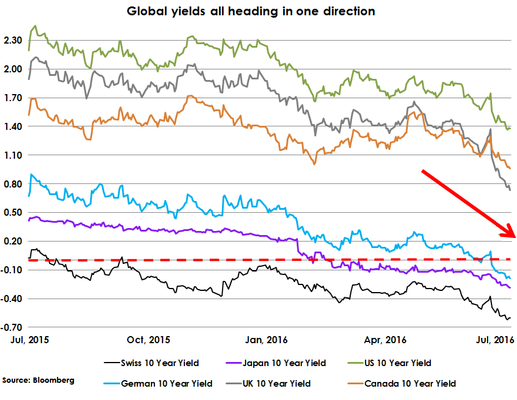 “It seems that the lower rates go, the more frenzied the demand,” Hughes wrote. And this is how far out by country the negative-yield absurdity reaches (chart via OtterWood Capital): 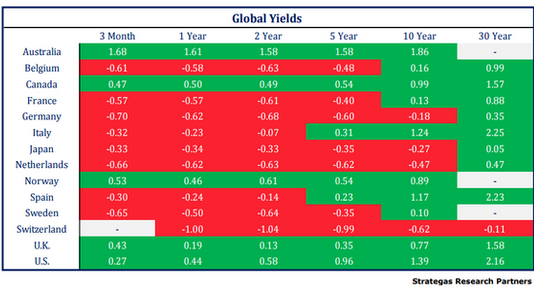 So over $12 trillion in investor money is stuck in negative-yield absurdity – an amazing feat in central banking, to convince so many investors, particularly the “smart money,” that this is somehow good for them, that paying money for the privilege of lending money to the government, no matter how decrepit its fiscal situation, even to Japan, is the hot thing to do.

But many big institutional investors have to buy government bonds, such as insurance companies and pensions fund, no matter what the yield. So there will always be a forced buyer for these instruments.

And investors that got in early made a killing on government bonds with long maturities, while some yield chasers going after the riskiest stuff got their heads handed to them (though some of them made a killing too). 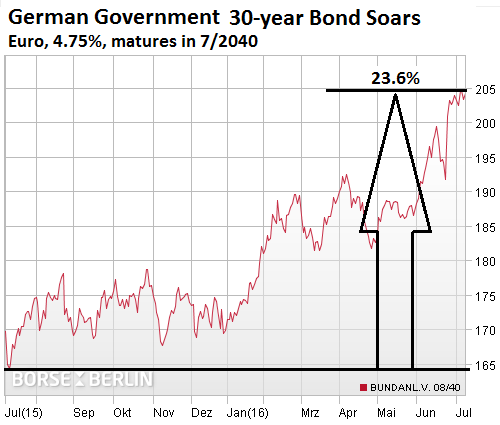 But yield chasers, those that take dizzying risks to make more money than anyone else, well, many did, but those that plowed into Deutsche Bank’s misbegotten contingent convertible bonds that have a coupon of 6% and that never mature, and that can be bailed in if bank capital falls below certain thresholds [read the sordid story… I’m in Awe at How Fast Deutsche Bank is Coming Unglued], well these courageous souls have lost their shirts. These 6% euro-denominated CoCo bonds have plunged 26% over the past 12 months, from 102 cents on the euro to 75: 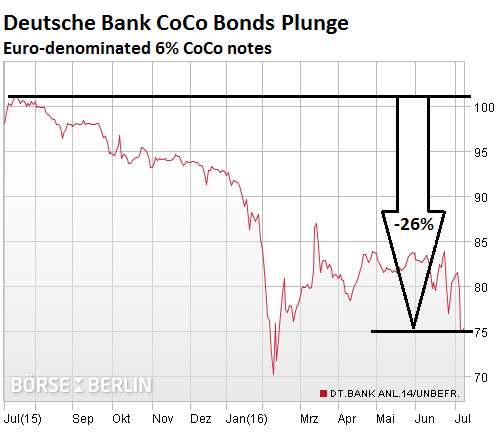 So taking risks doesn’t always pay in this environment where central-bank NIRP-and-QE engineering teams have turned even the crummiest government bonds into a top-performing asset class.

Investors are now chasing other government bonds, such as US Treasuries, whose yields haven’t fallen to zero yet, so that they too can ride them into negative yield absurdity and profit from what must be one of the greatest scams in the history of mankind.

And then there’s fear. Investors are fleeing into the safest, most liquid assets they can find and for which there will always be an eager buyer, if push comes to shove: the central bank.

It’s the fear of global shock waves that don’t seem to end: slowing demand, consequences of Brexit, a hard landing of China or the implosion of its credit bubble, a collapse or spike in oil prices, a mess in Brazil, a banking crisis in Europe….

The fear of losing their shirts on CoCo bonds, junk bonds, or stocks. The mortal fear that central banks have already lost control over equity markets and other asset classes, combined with the knowledge that they will never lose control over their government bond markets. They can even dry them up, as the Bank of Japan has done, to where there is no more market and no more bond sell-offs.

Then there’s the notion that interest rates can never rise again. Even small increases would cause over-indebted companies, consumers, and governments (those that can’t print their own money, such as state and local governments) to go bankrupt simultaneously. In this theory, however unproven it may be, rates can only fall deeper into the negative to keep this house of cards from collapsing. And thus, government bond prices can only rise. That’s the gloomy scenario the “smart money” is betting on.

And in Europe, the banking crisis the smart money has been afraid of is coming into bloom. Read…  I’m in Awe at How Fast Deutsche Bank is Coming Unglued