I have, on many occasions in the past in these pages, touched on the relationship between oil and the U.S. Dollar. The basics of that relationship are obvious: oil is priced in dollars on the global market, so from a logical perspective a strong dollar must put pressure on oil prices and vice versa.

If the currency is worth more generally then anything priced in it is, relatively speaking, worth less…the price of that commodity goes down. This is not a tick for tick relationship, but over time and when broader trends emerge it generally holds true. That is reason enough for those who trade and invest in the energy sector to keep an eye on the dollar, but right now it may be even more important than ever.

In a world where the debt of several major economic powers is trading at negative yields (you actually have to pay to hold German and Japanese government debt, for example), the dollar offers at least some return for those looking for a safe haven for their capital. That makes it an even better “fear indicator” than usual, and movement in the dollar is therefore likely to have an exaggerated effect on oil, where global demand is more important than local conditions.

Yesterday’s somewhat exaggerated selloff in response to an inventory report that was bad, but not disastrous, shows that oil is extremely news sensitive at these levels and that those holding long positions aren’t exactly doing so with conviction.

It also showed that the attention of the market is switching to the demand side. Crude inventories were not the problem yesterday; if anything they indicated that production is being kept in check. What caused the drop was a small drop in refinery utilization and growing gasoline stocks, both of which indicate demand concerns. 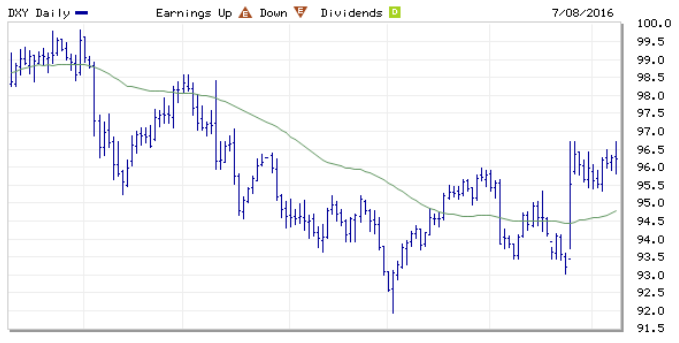 If, then, demand is the main concern for oil traders right now and the dollar reflects possible concerns about global growth, and therefore demand for energy in general, it makes sense to analyze possible moves in the dollar.


From a technical perspective the 6 month dollar index chart above certainly indicates some upward pressure. The clearly defined flag pattern that has formed post Brexit vote, with a sharp run-up forming the flagpole and then a period of volatility with a downward bias forming the flag, would generally be considered a bullish sign, and the run up over the last few days confirms that view.

Technical analysis, however, only goes so far. Without some fundamental impetus, any reaction to a chart pattern is destined to be short lived. In this case, though, the fundamental view also indicates that dollar strength is likely.

First, as mentioned above, it is one of the few safe places for capital to hide that offers a positive yield. In addition, though, this morning’s jobs report for June also indicated that the U.S. economy, at least as measured by that metric, is not in too bad a place. That is certainly true as compared to other major powers that are battling the prospect of deflation.

What we have, then, is a situation where the Fed has publicly admitted that they have concerns about global growth, but, based on domestic data, may be tempted to return to a path of rate increases earlier than most currently anticipate. The prospect of higher U.S. rates, and therefore dollar strength, even as the rest of the world is struggling is, quite possibly, the worst possible scenario for oil prices.

I should make it clear that I am not saying that oil is about to plunge again. Even if it is at a slower than optimal rate, demand for oil continues to grow. That and the fact that the huge cuts towards the end of last year and at the beginning of this by E&P companies are beginning to be felt, suggest that the $40-50 level for oil is about right. The point, though, is that the risk for oil from here is to the downside. That would indicate that holding off on energy stocks and trading oil with a bias to the downside would be smart things to do. Whatever you do, though, keep a close eye on the dollar. By Martin Tiller, Oil & Energy Insider

I take the huge demand for dollars and safe sovereign debt as a warning. Read…  Do Oil Markets Signal A Global Downturn?

26 comments for “Keep an Eye on the Dollar: It’s More Important than Ever”