Real estate is local. And so housing bubbles are local. When enough of them happen, they coagulate into a national phenomenon. This has already happened. In March 2013, we started calling this phenomenon Housing Bubble 2, and we’ve watched in awe how it bloomed, nurtured by ultra-low mortgage rates, government subsidies, the Fed that is relentlessly “healing” the housing market, yield-desperate investors, private equity firms, Wall Street, a surge of foreign buyers who want to get their money – however they’d obtained it – out of harm’s way, and a million other factors. All of it has been accompanied by a national boom in hype.

Now there are signs that our awe-inspiring Housing Bubble 2, like all housing bubbles, is beginning to unravel. This too is local, here and there, while still booming in other places. It shows up in some key markets. Then it spreads. When it spreads far enough, the unraveling of Housing Bubble 2 becomes a national phenomenon.

It has now started to unravel in some markets that were among the hottest and craziest until last year: Miami, San Francisco, and Manhattan. All three are bogged down in a condo glut.

So here’s Manhattan. Sales of apartments in the second quarter dropped 10% year over year, to 2,281 units, the lowest since crisis-year 2009 (when 1,482 unit were sold), according to The Wall Street Journal, which had dug up the data from city records.

Sales of condos rose 10%. But this includes a large supply of new units in high-rise developments that went into contract months or years ago during the early stages of the development, and that, as The Journal put it, “no longer reflect current market conditions.”

In a new twist, and until recently a bastion of strength: sales of “lower priced” apartments – which in Manhattan are units that sold for less than $1 million – plunged 20%.

At first, the weakness in the Manhattan housing market was in the luxury sector. It became visible last year and got more serious this year. In May, we reported on the Lower Manhattan  luxury condo glut – with 261 penthouses on the market – and plunging prices. At the time, the meme was that this is impacting only the very high end. Now that meme has been obviated by the market.

“I think it is a correction, a serious correction,” Hall Willkie, president of brokerage Brown Harris Stevens, told The Journal. In the quarter, the number of new contracts signed at his firm plunged over 20% year-over-year. He blamed the uncertainty over the US presidential election and the turmoil ahead of the Brexit vote. Other brokers blamed the stock market that has stubbornly refused to set new highs this year and has unnerved some folks with its volatility.

A big part of the problem is pricing. As is usually the case in real estate, when high prices become an obstacle, unit sales plunge, as buyers dig in their heels, while sellers are reluctant to cut prices and just sit on their units.

And prices have soared for years. The median price – half sell for more, half for less – jumped 13.7% from a year ago to $1.12 million. The average price hit a record of $2.08 million, pushed up by a small number of units that sold for tens of millions of dollars. The Journal observed: “Many brokers said asking prices were set too high….” Um, suddenly.

But condo sellers got the message that this is a glut and that prices need to come down to move these units. While the median condo price is still up 12.2% from a year ago, that boom is over, and prices have plunged 14.5% since Q1, a huge drop in just three months (“figures based on an analysis of documents filed with the city’s Department of Finance as of June 27”: The Journal).

This includes 13 sales with an average price of nearly $20 million at the brand new 432 Park Ave mega-tower. The most expensive of those sales: $59.1 million. But it had gone into contract in December 2014, reflecting realities of a bygone era. 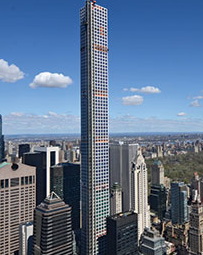 “The luxury market has been choking on quite a bit of overpriced inventory,” broker Donna Olshan told The Journal. “Fantasy and aspirational pricing just doesn’t cut it.”

And there are cracks appearing in the US market on the other end of the money spectrum, where the New York Fed is worried about “astronomical” default and loss rates. Read… NY Fed Warns about Booming Subprime Mortgages, now Insured by the Government

64 comments for “It Gets Real: Manhattan Apartment Sales Plunge”