Dealing with a Financial Crisis under cover of Brexit Chaos

Remember TARP, the Troubled Asset Relief Program that the US Congress approved to bail out banks and other companies during the Financial Crisis? $700 billion were authorized, later reduced to $475 billion. The Treasury eventually dispersed $432 billion. I bring this up because the ECB bailed out the European banks with more than TARP, in just one day: on Brexit Black Friday.

The ECB saw what was happening to the shares of the largest banks on that propitious day. It saw a blooming financial crisis:

The fiasco that happened to the Spanish and Italian banks was so enormous that it sent stock markets into their largest one-day plunges on record, of over 12% [ Brexit Blowback Hits Italian and Spanish Banks].

The Stoxx 600 banking index, which covers the largest European banks, plunged 14.5% on Friday. It’s down 29.3% year-to-date, 42% from its 52-week high, and 76% from its all-time high in May 2007 before the Financial Crisis and the euro debt crisis knocked the hot air out of the banks.

But to keep panic at bay, Brexit and the resulting political crisis are used to cover up the blooming financial crisis.

And what a political crisis it is, not just for the UK, but for the EU. No one knows how this will end up. Businesses need certainty. They need to know what money they’re going to use next year, and what the trade and legal frameworks will be. They like to take those things for granted. But now, in the EU, no one can take anything for granted anymore.


Companies with cross-border operations – this includes all major banks and brokerages – have gigantic headaches, and the UK’s 2.2 million financial-sector employees are fidgeting on the edge of their chairs. It might take a couple of years for the UK to actually exit the EU, if it even happens at all, so there’s a little breathing room.

But where there’s apparently no longer any breathing room is with banks, and the ECB went into panic mode.

With bank stocks collapsing on Brexit Black Friday, the frazzled folks at the ECB decided it was high time to start bailing out the banks – and not dabble at the margins, but pull out the whatever-it-takes money-printing machine, and do so under the cover of Brexit chaos when no one was supposed to pay attention.

On Friday, the ECB pulled a huge magic trick, larger than TARP. Under one of its alphabet-soup programs – long-term refinancing operations (LTRO) – it handed teetering banks $399.3 billion, or $444 billion.

And as central banks do, it didn’t ask legislators for permission. It just did it. Here’s a screenshot of the ECB’s disclosure, with my annotations: 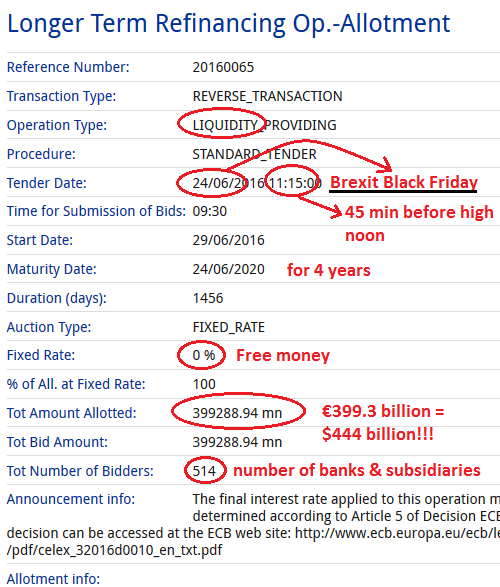 Settlement date is Wednesday. This money is going to go somewhere.

Part of it may be mopped up by the liquidity crisis the ECB sees unfolding at the banks.

And part of it might end up in other assets. This sort of thing is supposed to prop stock markets, particularly bank stocks. But since April last year, European stock markets have swooned, despite all the efforts by the ECB. Its flood of liquidity went into bonds, real estate, and into US assets.

This money might pump up prices, perhaps in the most unexpected places, if only briefly. It might even pump up bank stocks. Short sellers should take note.

And the day before Brexit Black Friday, with impeccable timing, the ECB pulled another big one: it leaked to Reuters that it was addressing the nonperforming-loan epidemic among Eurozone banks by sweeping it further under the rug.

The ECB, which regulates 129 Eurozone banks, has estimated that these banks are bogged down in €900 billion ($1 trillion) of bad loans, or 7.1% of all Eurozone bank loans. At some banks, NPLs have reached catastrophic levels: for example, 15% at Italy’s UniCredit.

So instead of forcing the banks to finally take the losses, raise a lot of new capital or topple, the ECB will merely give them “non-binding guidance” by the end of 2016 or early 2017, and some of this “guidance” won’t even be in writing, sources told Reuters with perfect timing the day before Brexit sank these banks.

The ECB doesn’t want to hurt fake earnings. And this leak to Reuters was supposed to have soothed the markets and helped prop up bank stocks.

The thing is, banks that need to raise equity capital must have inflated stock prices or else existing investors get crushed. If Deutsche Bank has to raise €30 billion in capital by issuing shares at €3 a share, existing shareholder will essentially be wiped out, and raising equity capital may no longer be possible. So the name of the game is to manipulate up bank stocks before issuing new shares. But it may be too late.