The New York Fed just warned about the ticking mortgage subprime time bombs once again being amassed, and what happens to them when home prices decline. But unlike during the last housing bust, a large portion of these time bombs are now guaranteed by the government.

Subprime mortgages are what everyone still remembers about the Financial Crisis. They blew up as home prices fell. Folks who thought they were “owners with equity” found out that they were just “renters with debt.”

And they dealt with it the best they could: forget the debt and the rent and stay until kicked out. Cumulative default rates on subprime mortgages spiked to 25% in 2007, according to the report. Banks ended up with the properties and collapsed. Mortgage backed securities based on these subprime mortgages imploded. Bond funds that held them imploded. All kinds of fireworks began. While subprime mortgages didn’t cause the Financial Crisis by themselves, they were an essential cog in a crazy machinery.

Now, the machinery is even crazier, subprime mortgages are even bigger, and mortgage-backed securities, chock-full with subprime, are hotter than ever. Only this time, the taxpayer is on the hook.

During the prior housing boom, from 2000 through 2005, government mortgage insurance programs covered less than 3% of all subprime mortgage originations, while private mortgage insurers covered over 20%.

The NY Fed’s chart below shows the plunge in privately-insured subprime mortgages (red line) during the housing bust, and how the government (blue line) piled into this business: 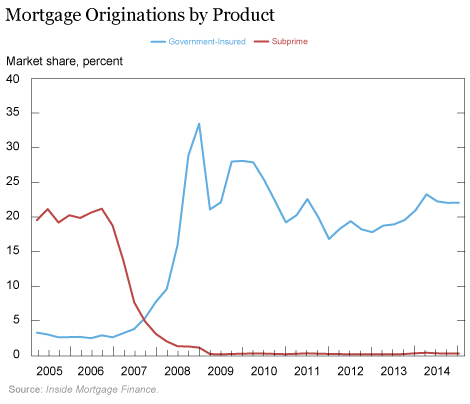 The thing is, according to the report:

Virtually all of these government-insured mortgages are securitized by Ginnie Mae, a government agency that guarantees the timely payment of principal and interest of these loans to investors that purchase the securities. That is, the U.S. taxpayers assume the credit risk on these mortgages.

That spike in subprime guarantees by the government in 2007 through 2009, at a time when home prices were falling, “quickly placed many of these borrowers in positions of deep negative equity.”

Many lost their jobs. Default rates and loss rates soared for these government-insured mortgages, which ultimately resulted in the FHA’s Mutual Mortgage Insurance Fund getting bailed out by the taxpayer in 2013.

By then, Housing Bubble 2 had already commenced. The good times were back. Home prices were re-soaring, and further damage to the taxpayer was put on hold. The NY Fed:

These loans are typically characterized by significant leverage, and borrowers often have checkered credit histories as evidenced by very low credit scores. For example, the FHA program allows for mortgages with an original loan-to-value (LTV) ratio of up to 96.5%; and such loans are also subject to an upfront mortgage insurance premium that is typically rolled into the loan balance, which further raises the initial LTV.

These highly leveraged government-insured loans are also typically issued to borrowers with weak to poor credit histories, further increasing the risk of default and foreclosure. Borrowers with poor credit histories are more likely to face adverse income shocks; and the combination of negative equity and a high risk of adverse income shocks implies that these mortgages are at high risk of default.

So these subprime mortgages defaulted at an “astronomical rate during the housing bust,” and they’re going to do that again during the next housing bust.

Before the housing bust began in earnest in 2007, the median LTV for these subprime mortgages was around 98% and the median credit score was below 650. In the years since the government has taken over insuring these loans, more than 10% of government-insured loans had LTVs of over 101% and “one-quarter were made to borrowers with FICO scores in the low 600s and below.”

Even subprime mortgages originated in 2010 have a five-year (into 2015) CDR of 8.4% despite the booming housing market over the period.

But “to make matters worse,” there’s a little bit of government hocus-pocus: these default rates “understate the share of borrowers who default, since loans that are refinanced within FHA are treated as a successful payoff, even if the refinanced loan that replaces it subsequently defaults.”

And these truly “astronomical” default rates and loss rates are very costly for the government programs that insure these mortgages.

But so far, so good, if Housing Bubble 2 continues forevermore – as it is widely expected to do, according to the housing industry, which has already totally forgotten the prior housing bust and what caused it. In that case, default rates and loss rates will be relatively small. Forever-soaring home prices assure that subprime mortgages with sky-high LTVs to borrowers with very low FICO scores don’t lead to sky-high losses.

The problem arises when home prices stall and begin to decline. That’s what the NY Fed is fretting about when it uses code words, like the “sustainability” of homeownership, in proposing some limits on this scheme. Clearly, they’re worried that Housing Bubble 2 will turn into Housing Bust 2.

This time, it’s the government and taxpayers that guarantee a big chunk of the subprime mortgages so that institutional investors that have gobbled up the subprime-based highly-rated mortgage-backed securities don’t have to take the inevitable losses.

But so far, the crazy machinery is still working, and renters are squeezed by the Fed’s “Wealth Effect.” Read… How the Government Hides Inflation, as Housing Costs Soar