Total business sales in the US did in April what they’ve been doing since July 2014: they dropped: -2.9% from a year ago, to $1.28 trillion (not adjusted for seasonal differences and price changes), the Censuses Bureau reported on Tuesday. That’s where sales had been in April 2013!

This is a barometer of just how tough business has become in the US. These sales are not just corporate sales, but total sales, including those by small operations and sole proprietorships. The data is survey based, and covers only sales in the US, unlike sales reported by S&P 500 companies, which include sales by their ventures overseas.

These total business sales are composed of three categories: sales by merchant wholesalers (34% of total), manufacturers (35% of total), and retailers (31% of total).

Non-durables did just as badly, except for drugs, which rose 2.9%. They’re the largest of all wholesale categories at $52.7 billion! They accounted for 12.2% of total wholesales! This is where the US economy is headed. Drug sales increase no matter what, based on rampant price increases by state-protected monopolistic structures that continue to gain heft via incessant mergers and acquisitions.

By contrast, wholesales of farm products, a smallish category at $16.0 billion – presumably still excluding the booming production of marijuana – plunged 19.2% from a year ago, largely due to crushed prices of agricultural commodities. This is what big pharma needs … competition! But no way.

Wholesales of groceries, the second-largest category, fell 4.3% to $49.3 billion. Wholesales of petroleum products plunged 18.9% based on the oil price plunge. So it was another ugly month.

But here’s where it gets sticky.

Economic data like this is collected via surveys with relatively small sample sizes. The results are run through an economic sausage maker to produce presentable data reflecting the vast and complex US economy. But the outcome can be a little, let’s say, inaccurate.


So Tuesday’s report included this gem:

Revised historical data from the Manufacturers’ Shipments, Inventories, and Orders (M3) Survey were released on May 18, 2016, and are reflected in this report.

Turns out, the Census Bureau had revised total business sales going back to Adam and Eve. Normally, we would just compare a month or two of the revisions to the old data to get a feel for the direction.

But on March 15, we’d lamented that total business sales for the period through January, based on data the Census Bureau had released at the time, had once again fallen sharply. We still have that data set. So we did something nasty just now: we overlaid the two data sets in one chart.

It forms a strangely consistent pattern: the March 15 data, as bad as it seemed at the time, was actually a lot worse. The old data set had overstated total business sales every month by billions of dollars going back to February 2014 (the revisions for prior years were minor). In that light, today’s revised data looks a lot worse.

Sales in January 2016 were originally reported as $1.296 trillion, the amount we lamented because it was terribly low. They’d fallen 1.1% from a year earlier and 5% from their peak in July 2014. “They’re now back where they’d been in January 2013,” we wrote at the time.

Turns out after the revisions, January sales had been the lowest since October 2012! And they’d first reached that level in April 2012. That was four years ago! February was even worse! 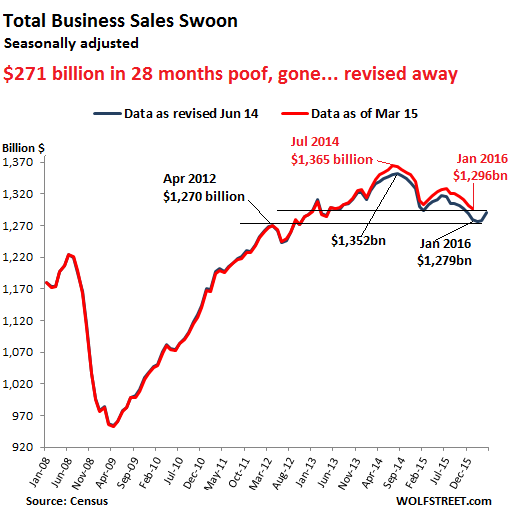 In sum total, the revision going back to January 2014 slashed the original data by $271 billion. That’s a lot of sales for a 28-month period that suddenly didn’t happen.

In April, total business sales edged up 0.9% from March to $1.29 trillion seasonally adjusted. That sort of March-April uptick happened every time but once since the Financial Crisis. But sales were down 2.6% year-over-year, down 4.6% from the July 2014 peak, and back where they’d first been in January 2013.

And we already know: future revisions will knock them down further.

It gets worse: These sales are not adjusted for price changes. But over the four-year period, the Consumer Price Index increased 4.2%. So in real terms, chop off another piece of that miserable sales pie.

Since April 2012, the US population has grown by 3.1%. So figure in the additional people plus 4.2% inflation over the period, to get real per-capita business sales. From that perspective, they’re a true fiasco.

That’s why the economy feels so terrible for tens of millions of Americans who’ve not been able to scramble on the Fed’s wealth-effect gravy train — the real per capita who experience the economy as it really is.

So what’s “one of the biggest threats to our economic outlook?” Read…  These Debt Slaves are the Government’s Largest Asset Class, and it will Haunt the Economy for Years