What’s next for “king coal” and bankrupt coal miners?

It was called “king coal” because it ruled! Coal-fired power plants were the cheapest way to generate electricity, based on capital costs and operating costs. And the US has plenty of coal. In the 1980s, over 55% of electricity generation was coal-fired. By 2000, it was down to 50%. Now it’s down to just over 30%, in second place, for the first time ever, behind natural gas.

In the first quarter of 2016, according to the US Energy Information Administration, coal production plunged 17% from the prior quarter, the largest quarterly drop since Q4 1984. At 173 million short tons (MMst), production was down 42% from its peak in Q3 2008. It was the lowest quarterly production since Q2 1981 when a strike crippled coal mines. But this time, there was no strike.

The EIA blamed the weather.

Throughout the fourth quarter of 2015, electric power plants received more coal than they consumed, leading to a net increase of 34 MMst in coal stockpiles, the highest fourth-quarter net increase on record.

High coal inventories encouraged electric power plants to consume coal from their stockpiles in the beginning of 2016, resulting in lower new coal orders.

Decreases in coal purchases have reduced overall coal rail traffic because most producers ship coal by rail. Based on data from the American Association of Railroads, coal carloads in the first three months of 2016 were about 20% lower than in the final three months of 2015. 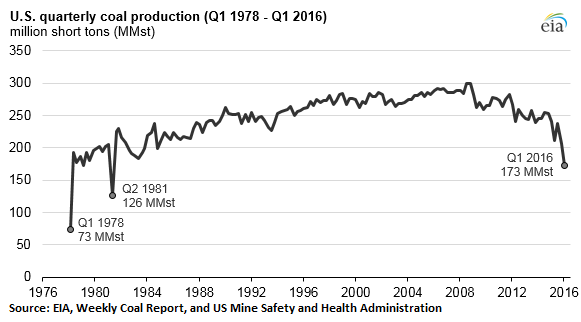 Why is this happening to coal?

At the same time, technical innovation changed the dynamics of natural gas power generation, and this is structural.

Fracking for natural gas created a “glut” in the US, starting in 2009. The price collapsed to ludicrously low levels, finally sending a number of specialized natural gas drillers into or near bankruptcy in 2015 and 2016. Coal, which competes directly with natural gas, got hit too.

And the Combined-Cycle Gas Turbine (CCGT) arrived in the 1990s. The gas turbine operates like a jet engine but drives a generator instead of fan blades. The hot exhaust gases then generate high-pressure steam to drive a steam turbine connected to another generator. Thermal efficiencies of these sets reach 62% and beyond. Coal-fired power plants only use steam turbines, and thermal efficiencies average 33% globally.

Over the years, that combo — a highly efficient power generator and a ludicrously low price of natural gas — has changed the dynamics of the US power generation sector.

And a third technological development has started to muck up the coal market: the growth in renewables, particularly wind and solar, has been eating into coal’s market share.

Stricter environmental regulations, on top of these structural changes, render old inefficient coal power plants a losing proposition. Hence, record coal-fired generating capacity is being retired – the oldest, least efficient plants first. Those power plants aren’t coming back. Even when the price of natural gas jumps, power generators won’t be able to play the same game to the extent they used to: switching from gas to coal and back, in order to push the price of the other down.

So coal exports will solve that demand problem?

Lackadaisical economic growth, if any, in Europe, China, Japan, and elsewhere, plus a concerted effort in China to harness cleaner sources of energy, have repressed coal prices internationally. And coal exporters are facing another nightmare: a global market that is oversupplied with liquefied natural gas (LNG) whose price, as a consequence, has also collapsed.

Hence coal exports have crashed 32% in March from a year earlier. And according to the EIA, it might not get better anytime soon, for additional reasons:

Lower mining costs, cheaper transportation costs, and favorable exchange rates are expected to continue to provide an advantage to mines in other major coal-exporting countries compared with U.S. producers.

The EIA forecasts exports of US coal to fall 10% in 2016 and 12% in 2017, after having already plunged 23% last year. If that scenario plays out, coal exports would collapse by 40% over the three-year period.

Despite what many folks would like to believe, coal won’t disappear as a fuel in the US. But for a significant rebound in coal production and consumption to happen, the price of natural gas would have to skyrocket from its ludicrously low levels.

That is likely to happen after enough natural gas drillers got pushed over the edge or so close to the edge that they can no longer ramp up production on a moment’s notice; they won’t have the people, the money, and the rigs. They’ll be spending a long time persuading heavily bruised lenders that this time it’s different. But even then, so much coal fired generation has been retired that the old way of switching to coal and re-destroying the price of natural gas might no longer work.

There are always winners and losers. Read…  What Dun & Bradstreet just Said about Business in America’s Relentlessly Tough Economy