“One of the biggest threats to our economic outlook.”

Endless discussions of how important inflation is to the US economy, and how there hasn’t been enough of it in recent years, and how more inflation would be a godsend, has become the standard. The threat of lethal deflation is being brandished to rationalize all kinds of absurd monetary policies. And we know why: inflation is good only for debtors, in an over-indebted country.

But that’s not true either. Because a lot of debtors, particularly those who funded their education with loans, are being strangled by … inflation.

“College Tuition and Fees constitute one of the biggest threats to our economic outlook,” writes Jill Mislinski at Advisor Perspectives, which runs an excellent series of analyses and updates on the topic.

The chart below (by Advisor Perspectives) shows the Consumer Price Index sub-component for college tuition and fees (red line) going back to 1978. It also shows the price increases of autos (blue line) and medical care (purple line), “both of which pale in comparison”: 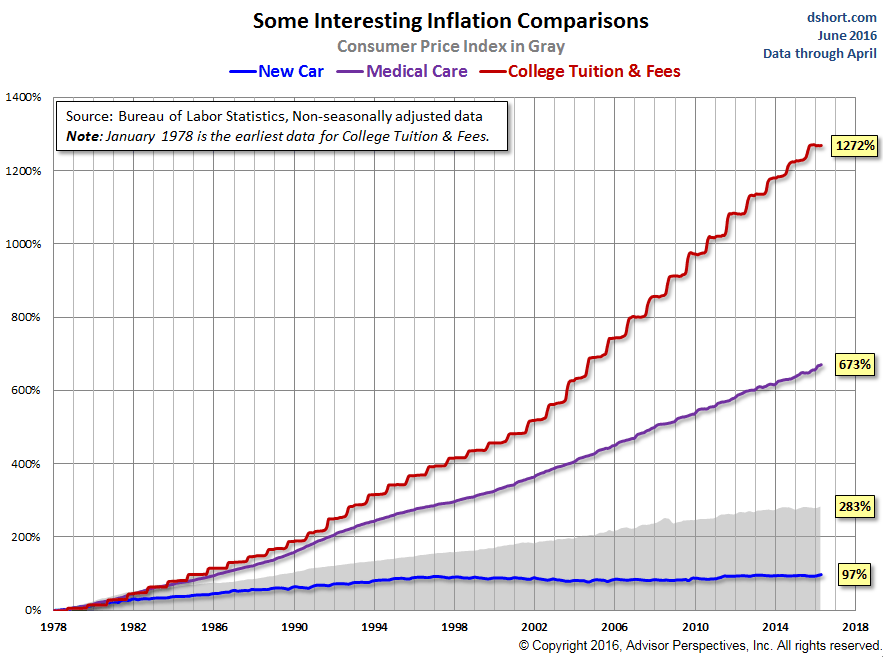 During the decade of the 1990s, when real out-of-pocket funding declined 25%, tuition and fees rose 92%, which sounds substantial … until you compare it to the 1272% across the complete data series. For early boomers (a decade before the time frame in the chart above) paying for college was sort of like buying a car. But in recent decades, it has become more like buying a house, for which the strategy of a minimum down payment is commonplace for first-time buyers.

The annual stair-step rise in college costs seen above is probably the most dramatic visualization of inflation data we routinely produce.

But it’s even worse: This chart only shows data for federal loans to students. It does not include non-federal loans to students. No hard data exists for this. The New York Fed, which tracks household debt and credit via surveys, estimates that, based on its survey results, total student loans from federal and private lenders has reached a record $1.26 trillion. And it considers 11% of the outstanding balance in default!

Which begs the questions, as Advisor Perspectives puts it, “What line item is the largest asset in Uncle Sam’s financial accounts?”

Student Loans. They’re a liability for students and former students, often for decades to come. They crimp their spending behavior, delay home purchases, and trigger credit problems. Even hopelessly indebted student-loan debtors cannot get their student loans discharged in bankruptcy. But these loans are an asset to the other side.

Student loans have ballooned into the largest financial asset category on the balance sheet of the federal government, accounting for 45.7% of total federal financial assets, up from around 17% before the Great Recession, and up from about 9.5% in 2000: 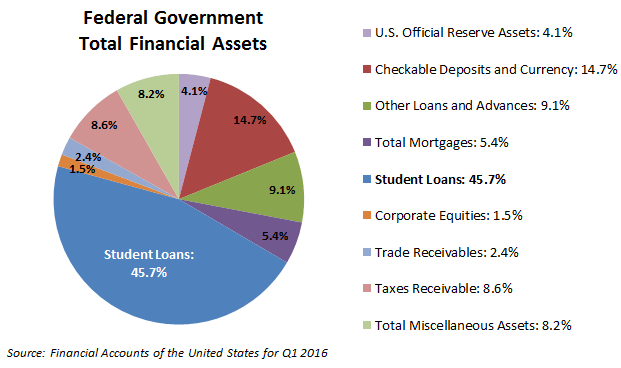 “The student loan bubble, the biggest slice in Uncle Sam’s asset pie, will haunt us for many years to come,” Mislinski writes.

But student loan balances are not going to stop ballooning anytime soon. Why? Because it’s structural. It’s built into the system.

In the US, the price of a college education is determined by educational institutions. The customer (the student) who buys the product generally doesn’t have the money for that product. So they cobble together a support system (the third party): help from mom & dad and other relatives, and to a large extent, financial aid including student loans.

In this system, the seller sets the price based on what third parties can pay. That third party includes the deep pockets of the federal government, which enable these enormous price increases.

Customers are told they must have an education in order to succeed in life. So they can’t easily walk away.

What is lacking is market discipline — the threat that a large number of students (say, 50%) will simply refuse to buy this product unless prices come down. Suddenly, universities would see their “revenues” collapse. They would have to compete based on the cost of tuition and fees. They would have to become more efficient. They would have to produce more with less to bring their costs down. And if they fail to lower their prices enough, year after year, as is happening with TVs and smartphones, their customers would simply not buy.

But that discipline is not built into the system. Instead, tuition and fees get inflated year after year without market resistance. Sure, there are some student protests and the like. And after the police-strength pepper spray dissipates, tuition and fees are raised again.

Universities bear none of the risks. If former students cannot find employment with enough income to pay for this debt, and if they then default, or if this debt is forgiven in some manner, then lenders (mostly the government, and therefore taxpayers) eat the losses, while the university smiles all the way to the bank — when it should be the universities that eat the losses on loans of their former students.

This is inflation of the most pernicious kind that will haunt the US economy for years, and the Fed is blissfully blind to it.

So who is the most impacted? Ah yes, the Millennials. Read…  The Revolt of the Debt Slaves Has Started

75 comments for “These Debt Slaves are the Government’s Largest Asset Class, and it will Haunt the Economy for Years”