In the latest edition of the Numbers Report, we’ll take a look at some of the most interesting figures put out this week in the energy sector. Each week we’ll dig into some data and provide a bit of explanation on what drives the numbers. 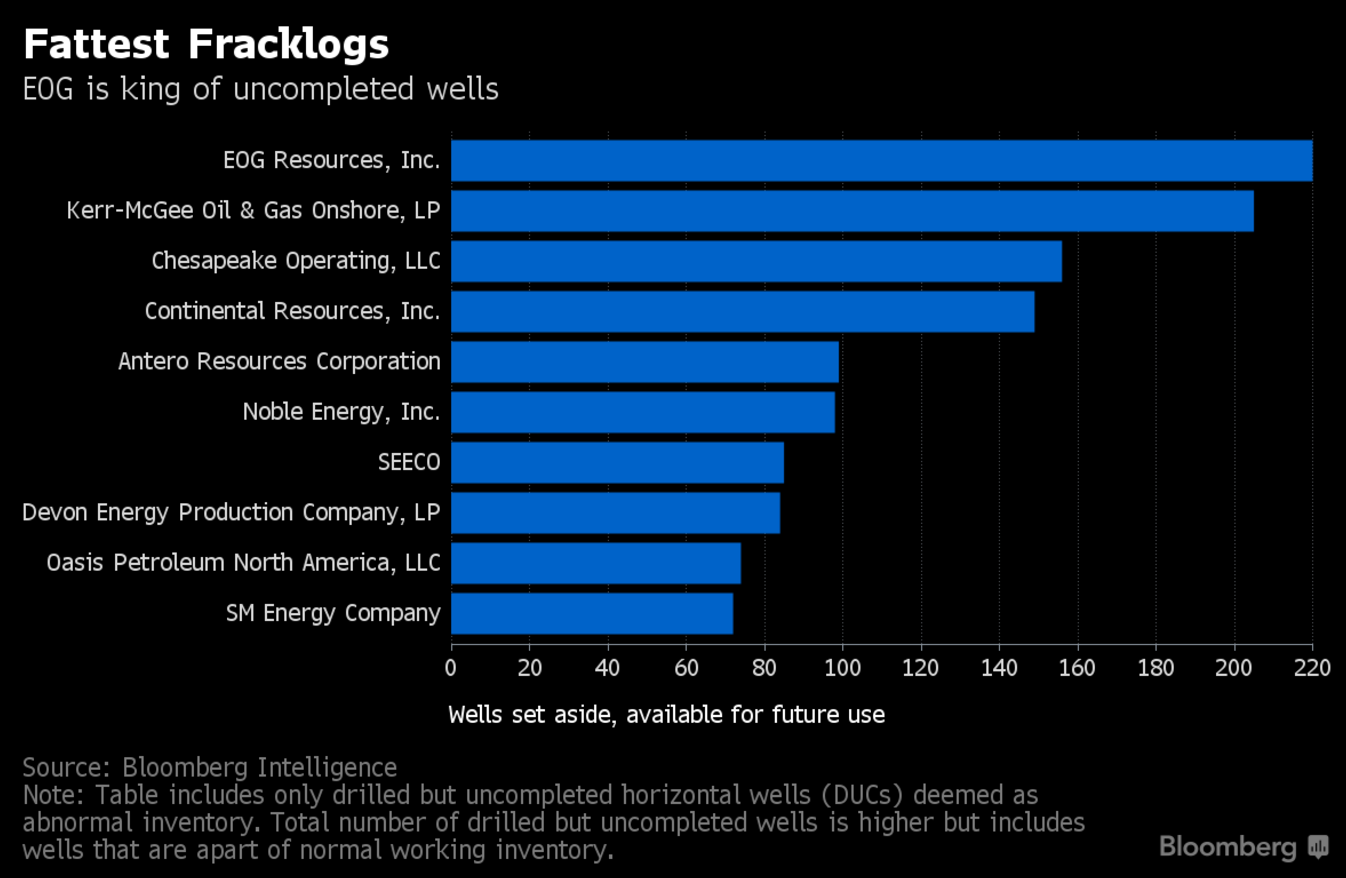 Oil is almost back to $50, raising the prospect of a flood of new oil from wells that suddenly become profitable. Before oil from newly drilled wells comes online, there could be an initial onslaught of production from drilled but uncompleted wells (DUCs).

According to Wood Mackenzie, the 50 largest publically traded oil companies have an average breakeven price of $53 per barrel, tantalizingly close to today’s prices. The DUCs may not be completed in earnest until prices reach the mid-$50s, Bloomberg Intelligence says.

The wave of drilling and completions might not come roaring back, however, after companies were burned last year when prices briefly moved up to $60 per barrel only to fall back again.

But as completions pick up pace, new output will put downward pressure on WTI, potentially preventing sharper price increases in the short run.

EOG Resources (NYSE: EOG) is one company to watch, a Texas driller that Bloomberg Intelligence says has the largest backlog of DUCs. 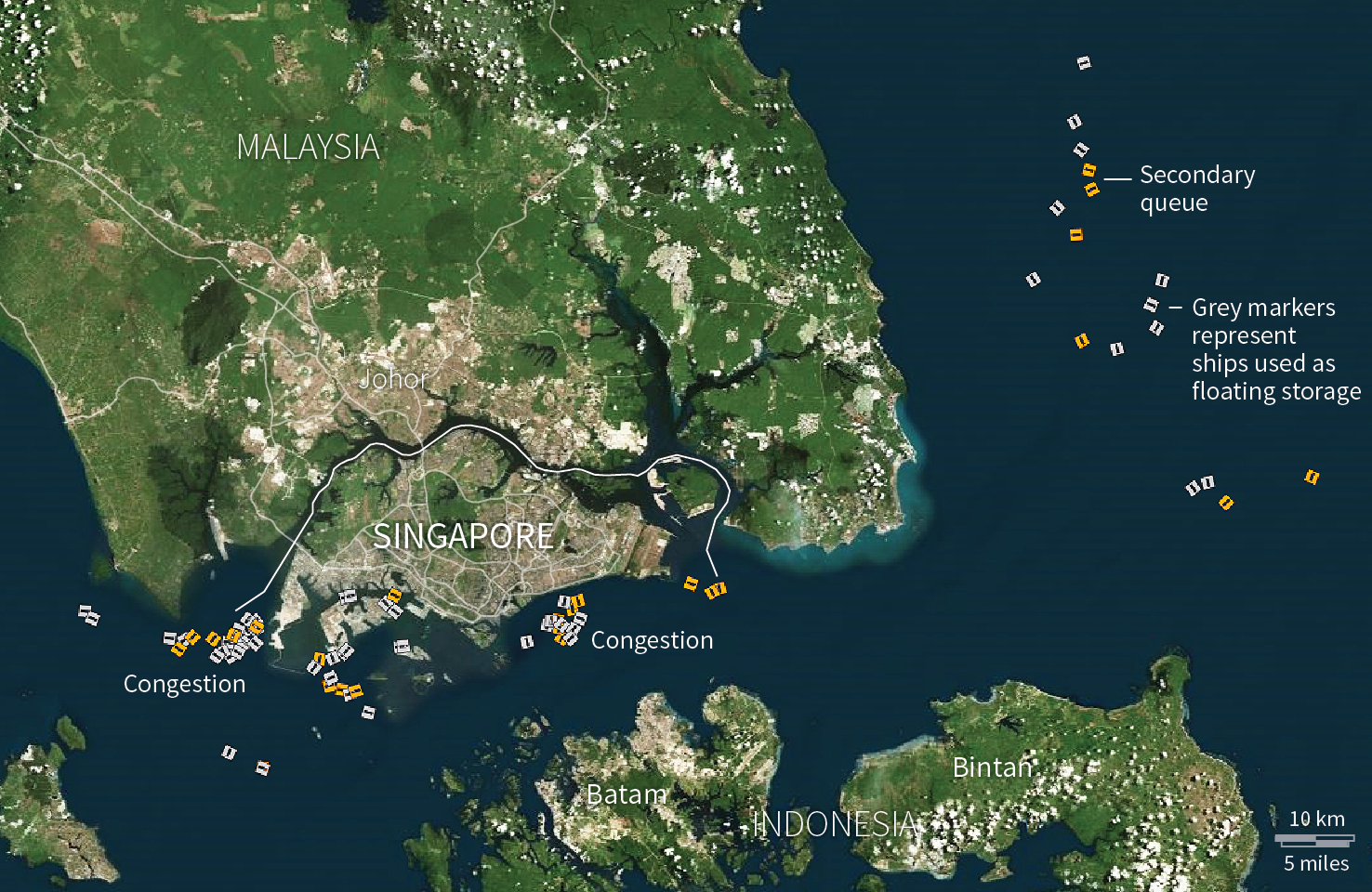 A traffic jam of oil tankers outside several key ports in Asia is a glaring red flag that the crude oil markets are not yet in balance.

Because of Singapore’s strategic location at the Straits of Malacca, it is one of the world’s great oil hubs. Tankers refuel there, large refineries process crude, and onshore containers store crude. But tankers have lined up outside ports in recent weeks, a symptom of a market that is oversupplied.


A Reuters analysis shows a few dozen very large crude carriers (VLCCs) sitting offshore in Singapore, some waiting to unload their cargoes, while others are simply storing crude at sea.

There is congestion in other ports, including Shanghai and Basra. Reuters found that in May there were 19 VLCCs sitting in the Persian Gulf near Iraq, waiting to load up 43 million barrels of crude. Iraq’s oil production has risen so much that it has struggled to export all the volume.

The main takeaway from these satellite images is that the global oil market is still oversupplied, putting pressure on the ability of tanker companies to store oil at sea. This should be viewed as a bearish sign that all is not well.

An array of investment banks raised their price forecasts for crude oil, as WTI and Brent moved from below $30 per barrel in February up to nearly $50 as of early June.

Supply has steadily declined in the U.S. and elsewhere, and demand continues to rise. The IEA sees the supply excess shrinking from 1.3 mb/d in the first half of the year down to just 0.2 mb/d by the second half of 2016.

13 Investment banks surveyed by the Wall Street Journal showed increases in price projections for 2016, the third upward revision in as many months. In May, the group of banks increased their average price for 2016 by $2 per barrel.

The projections are still relatively bearish. The 13 banks have an average price forecast of just $41 per barrel in 2016 and $55 per barrel next year. On the high end, Standard Chartered calls for $60 oil before the end of the year. The gloomier Morgan Stanley sees crude trading below $30 by the fourth quarter. On average, the 13 banks see crude at $48 per barrel in the fourth quarter, which is where oil is trading at today. 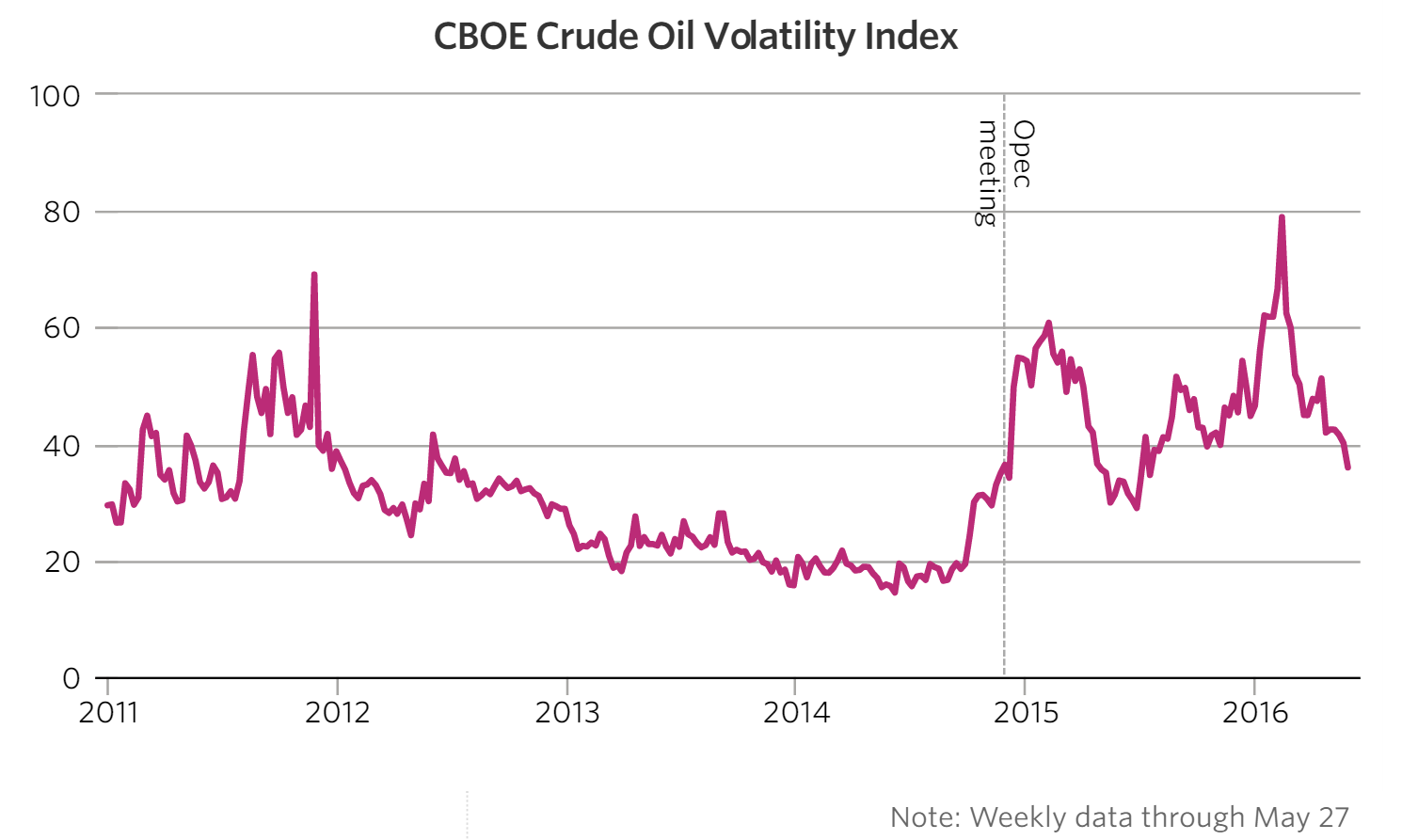 OPEC is often maligned as a cartel, a group that manipulates prices for its own profit. But OPEC has played a crucial, if under-appreciated role in ensuring price stability in the market. Its decision to abandon that role in November 2014 ushered in a new era of volatility.

Volatility spiked several times since then, rising higher when prices crash. Two large spikes stand out – March 2015 when prices dropped to the $40s, and the January-February 2016 period when prices plunged below $30 per barrel.

The rally in crude prices since then has pushed down volatility. For weeks, WTI and Brent have traded in the upper-$40s, trading in a relatively stable band.

Nevertheless, it is striking that the calm in the oil markets we are seeing today still reflects much higher volatility compared to the years between 2012 and 2014. 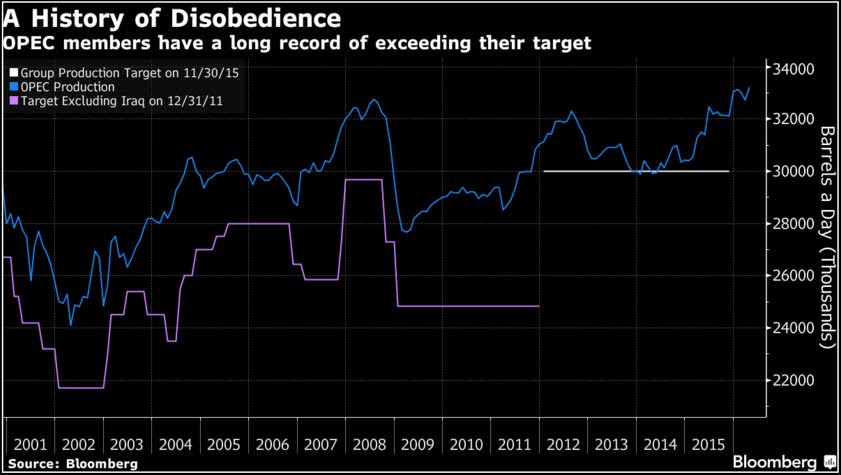 OPEC has played the role of market balancer for a long time, but it is important to remember that it routinely flouted its own production targets.

Every member has their own individual incentive to exceed production targets, hoping that other members will limit their output in order to prop up prices. The group never truly solved this collective action problem.

The burden of adjustment often fell on the shoulders of Saudi Arabia, the one country with a large ability to ramp up and down production at a moment’s notice.

Since 2011, OPEC members have ignored production targets more so than in previous years, which helps to explain the breakdown in trust and cooperation. By 2014, Saudi Arabia had grown tired of sacrificing by itself, and production sharply increased.

OPEC officially gave up on the increasingly meaningless production targets in December 2015. There have been rumors that Saudi Arabia is trying to persuade the group to restore its production targets, but for now, Iran appears unwilling to go along.

That’s it for this week’s Numbers Report. Thanks for reading, and we’ll see you next week. By ISA Intel, Oil & Energy Insider

On a broader scale, it seems the Commodities Rout isn’t quite over just yet. Read…  How We’ll Know When to Buy This Hated Commodity.