The thing about population growth.

It would have been nice if we’d been correct to the minute, but we were two months early, and therefore wrong, when we wrote on March 30, If This Plays Out, Friday Will Get Ugly.

But it did play out today.

At the time, we suspected that the March jobs report, released in early April, would be a debacle. We based this on an analysis of the divergence over time between the reports issued by payroll processing company ADP and the jobs reports issued by the Bureau of Labor Statistics. That divergence had been going on for months. Eventually it reverts to the mean. We postulated that March would be that month.

Instead, it happened two months behind schedule, so to speak, as today’s jobs report was precisely that sort of debacle.

This is what was “expected”:

The Labor Department was expected to report, according to Wall Street economists, a “moderate” gain of 158,000 jobs in May, “moderate” given that the Verizon strike kept 35,000 workers off their jobs. The “whisper number” was around 200,000 jobs.

And this is what we got:

“Shockingly weak,” and “In one word, ‘Ouch'” is how MarketWatch put it so elegantly.

It was ugly all around. A number of sectors, including manufacturing, shed jobs, and the labor participation rate dropped for the second month in a row, to 62.6%. Just about the only good number was the magic headline unemployment rate, which fell sharply, from 5% in April to 4.7%, the lowest since the Great Recession began, leaving some folks scratching their heads and searching for answers.

But here’s where the report really spread gloom:

The number of temporary jobs plunged by another 21,000. Temporary employment is a harbinger for future employment trends, on the way up and on the way down.

The temporary-help sector was a major – and much lamented – driver of jobs growth after the Financial Crisis. The sector began adding jobs in September 2009. It was an early sign that companies were starting to hire again but didn’t want to commit to more permanent jobs, even as the economy overall continued shedding jobs until February 2010. 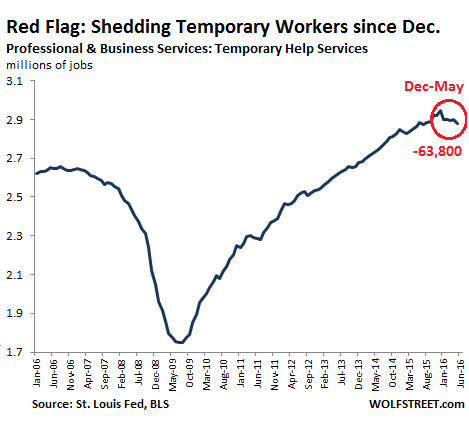 This also happened in 2007, when the temporary help sector started shedding jobs even as the overall economy was still adding jobs until right up to the official beginning of the Great Recession. And it happened in 2000, before the 2001 recession kicked it.

Staffing agencies are cutting back because companies no longer need that many workers. Total business sales in the US have been declining since mid-2014. Productivity has been crummy and getting worse. Earnings are down for the fourth quarter in a row. Companies see that demand for their products is faltering, so the expense-cutting has started. The first to go are the hapless temporary workers.

This is the reality for businesses:

The chart below shows the gaping disconnect between declining total business sales (all businesses, not just the S&P 500 companies) and total nonfarm employment. Something has to give – and it’s starting to: 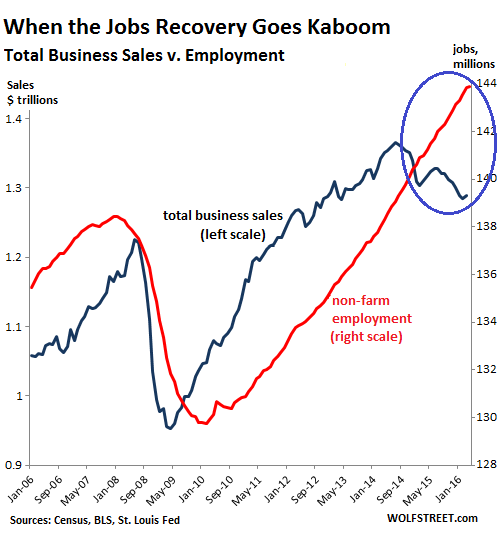 The decline in temporary workers isn’t just a one-month statistical blip, but a five-month trend: the sector has become a flashing red warning sign that the labor market is skidding even deeper into trouble.

And the US population isn’t about to stop growing, just because the growth in jobs has stalled and may soon start reversing. So this is going to make it a heck of a lot tougher for individuals out there in the job market.

There have been other warning signs. But until recently, the official labor market metrics in the US — unemployment rate, number of jobs created, weekly unemployment insurance claims, etc. — have been immune to the worsening malaise visible elsewhere.

For businesses that have to fight it out on a daily basis in the trenches, reality has begun to bite in a very serious way, especially for smaller companies. Read… US Commercial Bankruptcies Soar (despite Rosy Scenario)

57 comments for “What Makes this Jobs Report so Truly Ugly?”