This about sums up the US economy in more than one way.

The end of the corporate “profit recession” has been declared last week. It was based on data by the Bureau of Economic Analysis, released on May 27. Corporate profits, after declining with some zigs and zags since their peak in the third quarter 2014, suddenly ticked up in the first quarter 2016. And everyone was ecstatic.

Corporate profits are in the eye of the beholder. For example, “adjusted earnings” – the ex-bad items earnings proffered by companies and analysts – of the S&P 500 companies have dropped four quarters in a row, since their peak in Q2 2015, on a year-over-year basis.

But by BEA’s estimates, one of the broadest measures out there, corporate profits peaked in Q3 2014. The BEA tracks “profits from current production” based on all US corporate entities. It makes a number of adjustments, including the Inventory Valuation Adjustment and the Capital Consumption Adjustment. It thus produces a seasonally adjusted annual rate for each quarter that then can be compared to prior quarters. This annualized rate shows what profits would be like at this rate for the entire year.

Note the circled uptick in profits that was used by the media to proclaim the end of the profit recession, and how the overall profit picture since Q1 2012 smacks of stagnation, or worse: 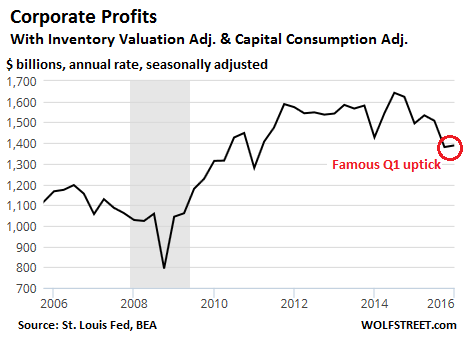 But there’s a detail – a huge detail – that the media conveniently forgot to point out: whose profits are included in “corporate profits.” The BEA tells us (emphasis added):

Ah yes, the Federal Reserve Banks (FRB), which include the 12 regional Federal Reserve Banks, such as the New York Fed. They’re private banks, owned by the largest financial institutions in their respective districts. And as private banks, their consolidated profits are added to US financial sector profits, and thus overall corporate profits, along with those from Goldman Sachs, JP Morgan, and your local bank down the street.

It works like this: the Fed creates money out of thin air, buys securities with that money, adds the interest payments from those securities to “Net Income,” then pays most of it back to the Treasury, whose interest payments became part of this income in the first place. If this seems a bit absurd and circular, so be it. We’re interested in another absurdity here.

For the first quarter, the Federal Reserve Banks reported a consolidated profit that had jumped 11% from a year earlier to a record $24.9 billion!

Stéfane Marion, Chief Economist & Strategist at Economics and Strategy, National Bank of Canada, annualized the Fed’s profits to make them comparable to the BEA’s annualized corporate profits. Annualized, the Fed’s profit “surged $16.5 billion in Q1 – to a record $117.9 billion,” he wrote in a note. The magic profits of QE: 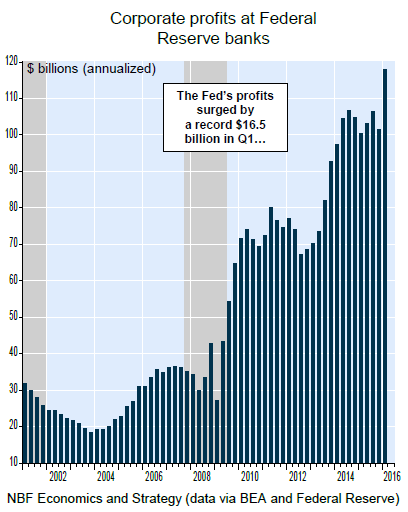 So somewhat embarrassingly for the gurus of the end of the corporate profit recession: “Were it not for this increase, overall profits in the US would have actually been down for a third consecutive quarter.”

In fact, on an annualized basis, the Fed’s magic profits accounted for 27.2% of US financial sector profits and for 5.3% of total US corporate profits (blue line in the chart below), “the highest level in a generation.”

As shown, there have been times when that proportion was greater, but never outside recessions and never when short-term rates were not rising significantly (historically, the Fed’s balance sheet was skewed towards T-bills, unlike now): 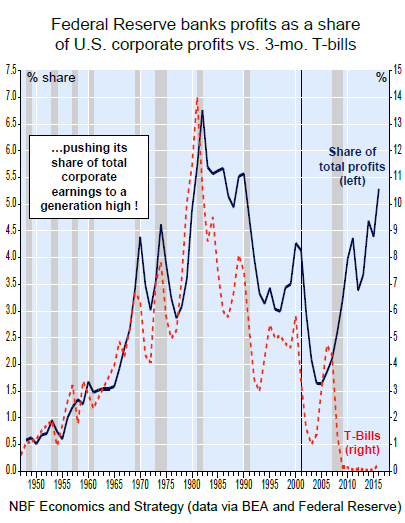 “Bottom-line,” wrote Marion: “An improvement in corporate profits that is driven by the central bank is not a sign of a healthy economy.”

And that about sums up our economy in more than one way.

Now even the SEC woke up to the game of “adjusted earnings” that companies and analysts play to hide some ugly realities. But what will the media do? Read… OK I Get it, Corporate Earnings Are a Fairy Tale and Reality is Crummy, But Do They Have to Push it This Far?