It’s already in the works and goes far beyond subprime.

The auto industry is crucial to the US economy and jobs. Auto sales account for 21% of total retail sales so far this year. They’re up 4.5% year-over-year. New Vehicle sales in 2015 hit an all-time record, even as the rest of brick-and-mortar retail was weak.

The industry – including component makers and other suppliers – account for a good part of US manufacturing. Transporting over 17 million new vehicles a year from assembly plants or ports of entry to cities around the country is big business for struggling railroads. Transporting them from rail yards to dealer lots is big business for specialized trucking companies. They also haul millions of used vehicles every year to and from auctions where rental-car and leasing companies dispose of their vehicles. Many of the jobs across the industry pay well.

Auto sales involve services, such as finance and insurance. They’re a significant source of revenues for local and state governments. Wall Street salivates because it gets to extract fees during many stages of the process – particularly in financing these sales and then securitizing the loans.

And all of it has been booming for years!

But if the flow of money slows, the entire growth machine starts grinding down. Pressures are already building up – and far beyond subprime auto loans.

The New York Fed’s Household Debt and Credit Report, released today, shows that total household indebtedness rose 1.1% over the first quarter, to $12.25 trillion, just 3.3% below the peak of the last credit bubble in Q3 2008 that blew up with spectacular fanfare.

But this time the distribution is different: housing debt is lagging behind (due to the presence of institutional and foreign investors), but non-housing debt has jumped far ahead, led by student loans, which more than doubled since the Financial Crisis to $1.26 trillion, and auto loans which soared 29% to an all-time high of $1.07 trillion.

While overall “serious delinquency” rates (90+ days delinquent) improved a bit, they have begun to deteriorate for the $1.07 trillion in auto loans.

At 3.5% of outstanding auto loan balances, serious delinquencies are still way below their peak of 5.3% in Q4 2010 when the employment fiasco was coming to full fruition. But during the prior recovery leading up to Q2 2007, they ran between 2% and 2.5%. So already, consumers are more stressed with their auto loans than they were during the prior recovery. And these are the good times, with interest rates at historic lows!

The higher delinquency rate today compared to the prior recovery shows that the auto boom over the past few years was obtained by pushing auto loans to the max.

Regulators have been publicly fretting about auto loans, including the Office of the Comptroller of the Currency. In its most recent Semiannual Risk Perspective, released last fall, the banking regulator warned:

Underwriting practices and weak loan structures in auto lending are most concerning in banks with high concentrations of auto loans. Strong auto loan growth alone does not pose systemic risk; however, the level of concentrations and rate of growth at individual banks are an increasing focus for OCC. Even as banks have increased capital levels, auto loan portfolios represent greater than 25% of capital at about 15% of banks.

OCC worries that the rapid growth of auto loan balances reflected not only booming auto sales, which wouldn’t be a problem per se, but the “extended durations of loans caused by lengthening maturity schedules” and the ever-rising loan-to-value ratios. Together, they “create a longer period of time banks and consumers are in a negative equity position.”

And there’s another kink, according to OCC:

In addition to an increased exposure from lengthening terms, used-car values remain well above the historical average. The Manheim Used Vehicle Index (MUV Index) over time reflects a historic average index of 113.5, compared with a recent MUV Index of 124.3 in August 2015….

Fundamentals suggest that the Index’s rise in April will be temporary, but they do not suggest a near-term collapse in pricing. A modest easing in wholesale pricing would not be unwelcomed by dealers, and it would not be overly painful for commercial consignors. A bigger, say 5%, decline would be harmful to both. 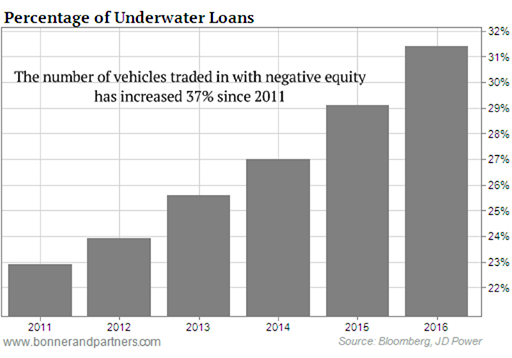 Here’s the problem for auto sales and manufacturing: Bill wants to buy a new car. His current car has a trade-in value of $20,000. But he owes $25,000 on it because when he bought it new a few years ago, he financed it for 84 months to keep the payment down. Because he was strapped for cash, he asked the dealer to roll the amount for tag, title, and license fees into the loan, along with the $2,000 he was upside down in his trade at the time. So now that negative equity of $5,000 will have to be rolled into the new loan, along with the amount of title, taxes & license fees, dealer profit, plus some dealer fluff-and-buff….

And lenders, with the hot breath of the OCC on their necks, balk.

Bill ends up driving what he has for five more years. If enough people have to defer a purchase because lenders won’t finance their new vehicle – that’ll be a huge problem for auto sales and manufacturing!

It gets worse. Used vehicle values (trade-in values) are still historically high. But in a recession, they plunge. And Bill’s trade-in might suddenly be worth only $18,000. When that happens, negative equity skyrockets, and new vehicle sales spiral to heck.

OCC is worried about the lenders. But these lenders can strangle one of the largest sectors in US manufacturing and retail – along with all the industries and services that have spawned around it. This goes far beyond subprime. This is what happens when the good times of easy credit simply front-load sales and profits, thus paving the way for the inevitable reckoning.

Even with auto manufacturing still booming, overall manufacturing is already in trouble, and references to 2009 & the Global Financial Crisis keep popping up in the reports because that’s how bad it has gotten. Read…  Manufacturing Recession Goes Global as Demand Withers

88 comments for “What Will Sink the US Auto Boom?”