If a business could foresee that it would have a declining consumer base (declining number of total potential customers), that would likely be a pretty good reason for serious concern and significantly lower growth expectations. However, when it comes to China, the shrinkage of its under 65yr/old population and particularly of the 20-59yr/old population is somehow coinciding with the story of China transitioning from an export-based to a domestic consumption-based economy?

To wit, with a declining population, China will transition from exporter to consumer, while all those grown one-child-policy adults support their 65+ year-old parents, and still grow 6%-7% annually? Inquiring minds wonder how it’s possible a declining base of consumers would consume more.

In a word…CREDIT! And, the growth of credit in China has gone parabolic. It’s highly unsustainable and likely ruinous.

Each bar in the chart below represents annual growth or decline of the Chinese adult population. The blue line is a 4 period moving average of the population change. From 1973 through 2008, an additional 12.5 million Chinese adults entered the Chinese economy every year. That meant 12.5 million more consumers, home buyers, car buyers, potential job seekers, etc.

But since 2008, annual population growth has decelerated by 95%. By 2017 or 2018, it will begin a long decline. Every year from 2018, the adult 20-59 year-old population of China will decline by millions for at least two decades and likely far longer. This is no forecast or “gloom-n-doom” fantasy, but simply counting the number of people born and tracking them through the population (plus, China has net emigration).

All this means the charts below likely show a best case scenario although the population data could be lower if greater emigration occurs or a higher mortality rate ensues due to illness, environmental, or global disturbances (aka, war). 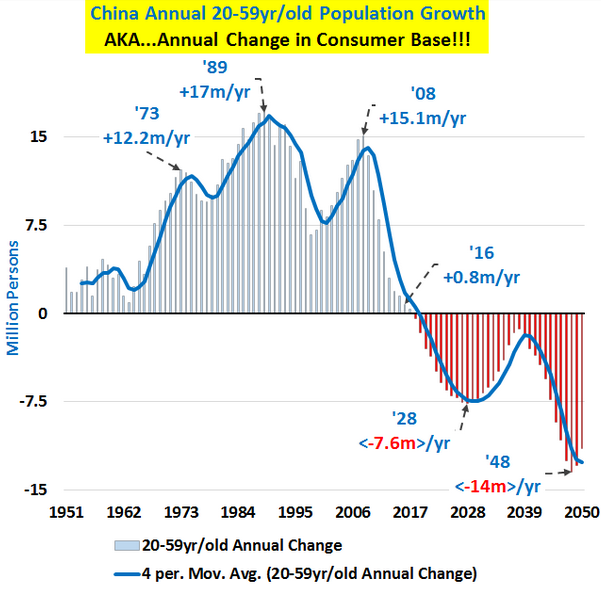 The People’s Bank of China has been pushing rates down since the Chinese population growth peaked and began decelerating (just like the majority of the developed nations central banks). 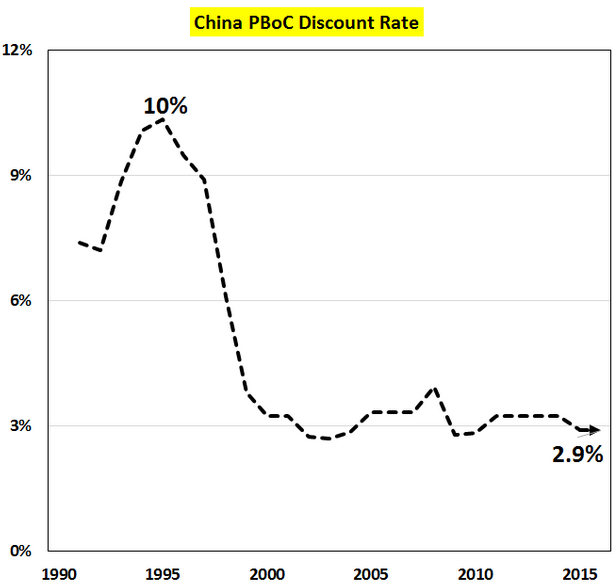 And the impact of the lower interest rates above combined with China’s capability to push loans out has had an amazing impact on credit creation! The hockey stick chart below of total Chinese credit creation is a monument to the mantra, “build it and they will come.” 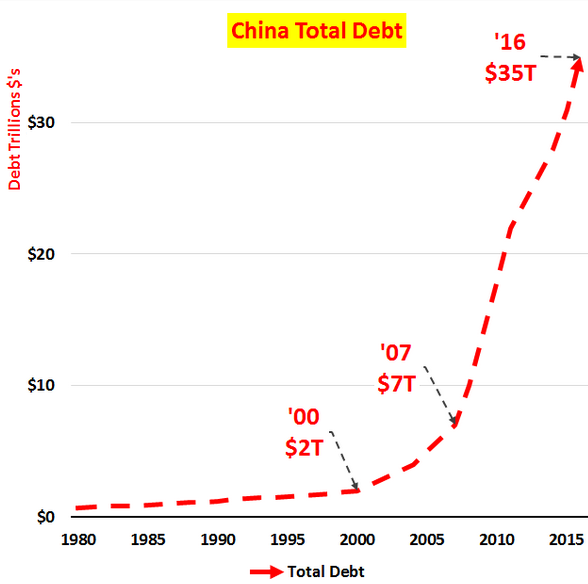 The problem is the Chinese have used the lower rates and massive credit bubble (aka, debt) to build out infrastructure, apartments, factories, shopping malls, etc., for a population base that is never coming!

Credit has been used to build millions of generally unaffordable apartments for a middle class and overall population that has already peaked and is fast receding. Building out somewhere from 50 to 100 million excess apartments and likely trillions of excess retail square footage for a population of under 65-year-olds in fast decline is the insanity only award-winning PhD economists could applaud.

The chart below puts all the pieces together so the inter-relationship can be clearly understood. Population growth slows and credit is made cheaper to incent a level of growth via debt beyond the populations general capability. As the population growth slows more dramatically, rates must be lowered in kind and debt ramped up to maintain “growth.” 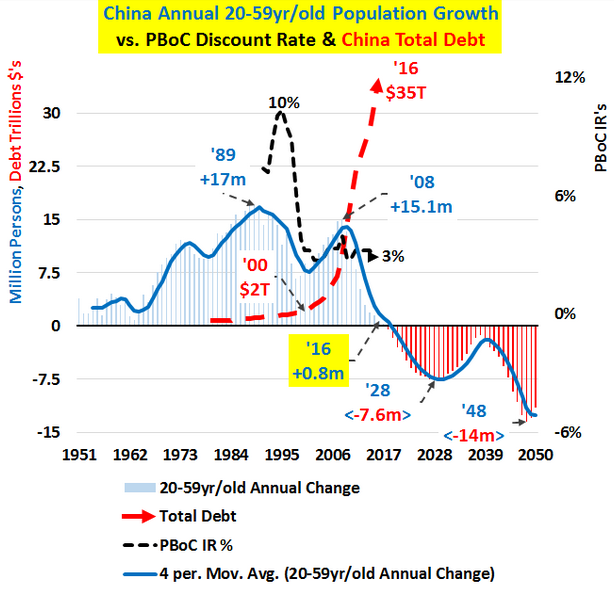 Beginning in 2018 and accelerating thereafter, there will be millions fewer adult consumers in China every year. On the flip side, the needy 65+ year-old population will swell until China’s total population peaks around 2030 and begins its Japanese style long-term depopulation. All this while interest rate policy plus debt creation are both already effectively exhausted.

There simply is nothing more to build when there is already such overcapacity and growth in non-performing loans. The Chinese determination to add new credit fuel in excess of $1 trillion alone in the first quarter of 2016 is the stuff of hyper-monetization — with money fleeing China and creating bubbles the world over — and potential hyperinflation. Sometimes reality bites…but pretending all is well is simply no longer a viable option. By Chris Hamilton, Hambone’s Stuff

The export and manufacturing powerhouse of the world, the locomotive – along with the US – of the global economy, and an indicator of the global economy itself, disappointed economists once again. The operative word in the media was “unexpectedly.” Read…   China’s Furious Stimulus-and-Debt Binge Backfires