China has been on an glorious debt-and-stimulus binge for the past few months. New corporate borrowing shot up to record levels as the People’s Bank of China opened all valves, and juice rushed through the state-owned megabanks to corporate borrowers and others all around.

In the first quarter, total debt ballooned by 6.2 trillion yuan (nearly $1 trillion), the largest quarterly jump ever, to a record 163 trillion yuan ($25 trillion), or 237% of GDP, up from 148% of GDP in 2007, according to some of the more benign estimates. Others peg total debt as high as 282% of GDP. Corporate debt alone is now estimated at 160% of GDP. But no one knows for sure. With the Chinese economy, everyone is groping in the dark.

It’s not the debt itself that scares observers, but the speed with which this debt has ballooned. It’s impossible to invests this sort of moolah this quickly in productive activities whose proceeds would allow for this debt to be serviced [read…  China’s “Lehman Moment” or Decades of Japan-Style Stagnation?].

Economists thought that this stimulus-and-debt binge would actually perk up manufacturing, boost services, and end China’s economic malaise, the extent of which remains unknown because no one, not even the Chinese leadership, trusts the official numbers according to which the economy grew 6.7% in the first quarter. Inflated as that number may be, it’s the slowest growth since 2009.

But wherever this money went – overseas real estate and M&A come to mind – it hasn’t been invested in China in productive activities, and it isn’t helping the economy:

The official manufacturing purchasing managers index fell “unexpectedly” to 50.1 in April from 50.2 in March (above 50 = expansion). It was the second month in a row barely above 50, after seven months in a row below 50. The median forecast by economists, as polled by the Wall Street Journal, had expected it to rise to 50.4.

And that’s the official number released by the National Bureau of Statistics. The unofficial number – the Caixin Manufacturing PMI – will come in a day. It has been even crummier: 49.7 in March, 48.0 in February, 48.4 in January, 48.2 in December…. It has been in contraction mode every month since February 2015.

But the decline of manufacturing suddenly doesn’t matter in China because the government is transforming the economy into a service economy. It is transitioning the economy away from its reliance on manufacturing, which is shrinking. Services are now the new locomotive. That’s the plan.

China’s official nonmanufacturing PMI, also released today, tracks not just services but also construction. And it fell from 53.8 in March to 53.5 in April.

The sub-index for services dropped from 53.1 to 52.5. Construction, which is where the stimulus money that stays in China ends up, rose from 58.0 to 59.4 in April. Construction is alive and well, and still a big engine of the Chinese economy, whether or not more ghost cities are needed.

But the sub-index for new orders plunged into contraction mode, down 2.1 points to 48.7 in April; new export orders also plunged 2.1 points to 45.7; orders in hand, though slightly higher than in March, came in at an abysmal 43.6. These are the harbingers of “growth” in the future. And they’re all in contraction!

So how well is China’s transition into services doing? This chart shows that growth of the nonmanufacturing PMI has zigzagged lower for years, from an all-time high of 62.2 in May 2007, via the big dip during the Financial Crisis, to the currently disappearing growth: 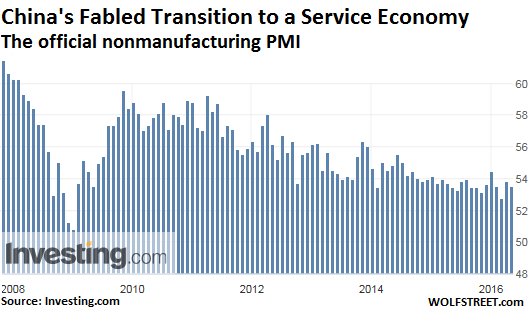 The fact that the manufacturing and the nonmanufacturing PMIs both are already weakening despite the enormous stimulus-and-debt binge that the PBoC and the government have orchestrated demonstrates that these easy-money policies have lost their effectiveness in driving economic growth.

The failure of these policies has been visible in export-dependent manufacturing for a while. But now it’s even failing in the ballyhooed transition to services that everyone had hoped would be a raving success. Instead, what do these policies succeed at? Adding to the already insurmountable mountain of debt, a good part of which is now going bad.