Technological innovation did it.

For decades, coal was the dominant fuel for power generation in the US. But now coal mining companies are being pushed into bankruptcy. Two weeks ago, it was the world’s largest privately held coal miner, Peabody Energy, that made the trip. They’re hounded by a slew of problems. Two of those problems are based on technological innovation.

Coal’s direct competitor in the power sector, natural gas, suffered a total price collapse starting in 2008, from which it has still not recovered. A surge of production from improved fracking technologies created a natural gas glut that has still not abated. Even today, inventories are at record levels.

It comes on top of a technical innovation in the power generation industry: the Combined-Cycle Gas Turbines (CCGT). The gas turbine operates like a jet engine but drives a generator instead of fan blades. The super-hot exhaust gases are then used to generate high-pressure steam to drive a steam turbine connected to another generator. Efficiencies of these sets reach 62% and beyond.

Coal-fired power plants only use steam turbines with efficiencies that average globally 33%. In other words, 67% of the energy in coal is wasted.

That combination — a highly efficient power generator and a price of natural gas that is so low that it is driving natural gas drillers into bankruptcy — has completely changed the dynamics of the power generation sector.

The decline of coal as a fuel in the power mix started in the early 1990s when the CCGT technology took off and started replacing coal-fired generators – the oldest, least efficient plants first – even when the price of gas was higher than today.

This chart from the EIA shows the collapse of coal use (black line) for electricity generation from about 58% of the mix in the late 1980s to just over 30% of the mix now. Gas fired generation (brown line) has grown from around 10% of the mix in the late 1980s to over 30% now. This year, it’s expected to exceed coal for the first time ever. Note the rise of wind and solar power (green line), benefiting from falling costs, federal tax credits, state-level mandates, and technology improvements: 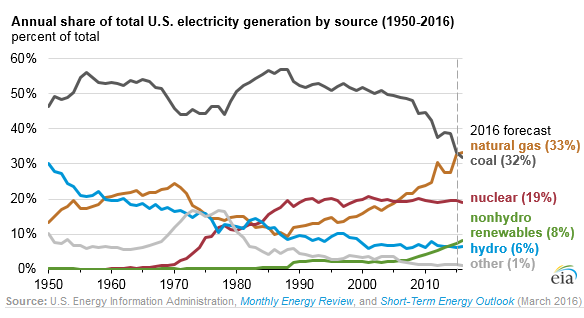 The absolute quantity of coal used for power generation in the US peaked in 2007 at 1,045 million short tons (MMst), according to the EIA. With electricity production growing very little and even declining in some years since, and with coal losing market share, coal consumption by power generators took a huge hit: by 2015, it had plunged 29% to 739 MMst.

Over the period, consumption rose only in Nebraska and Alaska. Idaho, Vermont, Rhode Island, and Washington DC have no coal-fired generators. In all remaining states, consumption dropped – and in some cases plummeted. 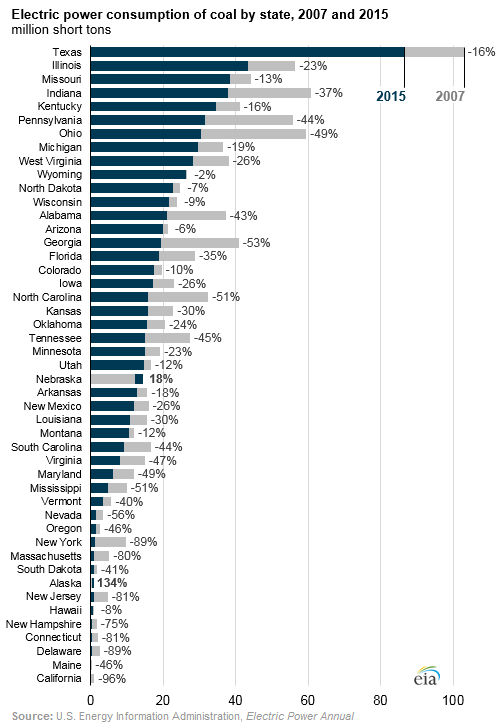 Of the states that slashed the tonnage of steam-coal consumption the most, Ohio (-49%) and Pennsylvania (-44%) are benefiting from soaring natural gas production in the nearby Utica and Marcellus shale plays and the often ultra-low prices at local trading hubs.

The 37% collapse of coal consumption in Indiana was also influenced by the legislature, which created a voluntary energy portfolio standard, effective 2012, that encouraged a switch from coal to nuclear, renewables, and gas.

In Georgia, North Carolina, and Alabama combined, coal consumption over the period collapsed by 49%, while natural gas consumption by power plants soared 202%.

This is what coal mining companies are facing. And it is becoming structural. Every year, more and more coal-fired power generating capacity is retired – not mothballed, but scrapped – while gas-fired, wind, and solar capacity is added. So even when the price of natural gas rises substantially, as it eventually will have to, it will not allow coal miners to return to their former glory.

Naples, Florida, a wealthy beach town on the Gulf of Mexico, known for its golf courses and high-end shopping, and a favorite hangout for Canadian snowbirds trying to escape their cold winters, has a problem: home sales are crashing and inventories are soaring. Read…  Canary in the US Housing Market: Canadian Snowbirds Cash Out

53 comments for “This Chart Shows the Collapse of “King Coal” by State, and Why Miners Are Going Bankrupt”